To “black ball” someone means to “ostracize” him or her. The phrase comes from ancient Athens, the home of democracy, meaning “rule of the people”—Greek demos (people) and kratos (rule). The word “ostracize” comes from the Greek word ostrakizein “to banish by voting with potshards.” Those pieces of broken pottery (below) were called ostraka. Some were white/light and some were black. If a government official was tried before a large assembly of his peers and their votes were tabulated and the official had more black balls in the urn than white/light balls, he was banished for ten years. 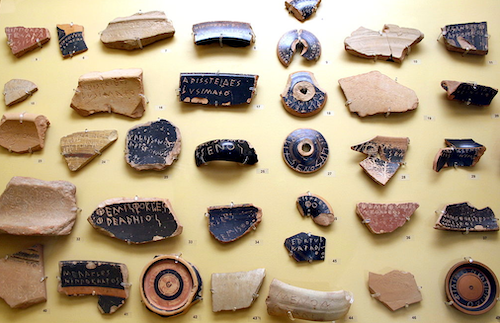 Originally, candidates for many official positions were chosen by lot. The men—only certain high-born men— were required to raise their hands on a YEA vote and then on a NAYE Vote. So that no one could actually KNOW who was for whom, elections evolved into the casting of ostraka into an urn and then was counted—“secret balloting.”

CLICK HERE for Casting Lots in the Bible article

Balloting” became the way to vote in secret in medieval Venice in 1540. At that time small balls were used. The original word was spelled “ballota” and perhaps took its name from the ballota leaf ?

Casting a paper ballot remains the defining act of American citizenship. Massachusetts was the first state to adopt a secret ballot in 1888, and South Carolina was the last to do so in 1950. When a new law was proposed, all the citizens of Athens had the opportunity to vote on it. To vote, citizens had to attend the assembly on the day the voting took place. This form of voting is called direct democracy.

Whether one votes with broken pottery or with ballots or absentee ballots, there is always the temptation of fraud (“deceit, trickery, sharp practice, or breach of confidence, perpetrated for profit or to gain some unfair or dishonest advantage.”)

In the 1960’s archaeologists found  8,500 “ostraka/ballots” from an Athenian election in a landfill in Athens. These ostraca were from the 471 BC election in Athens. At that time Themistocles (c. 524—450 BC) was up for re-election.

Themistocles was a prominent Athenian politician and general. He was not from aristocratic circles and was a populist, beloved by the working class in Greece. The supposedly “rigged re-election” triggered by the upper class drove him out of Greece. His many votes had been intentionally buried in the ground. He was driven out of Athens.

Themistocles eventually found himself working for the Persian king Artaxerxes I (reigned 465–424 BC). He was made governor of Magnesia. He lived there for the rest of his life and died, humiliated, in 459. But over 2,000 years later, thousands of votes FOR him were found buried in a landfill. Even in his post-exile lifetime, he was continually supported by his “voters.” Plutarch (c.46—c.119AD), the great  ancient biographer and essayist, over 500 years after Themistocles’ death wrote of him: as “the man most instrumental in achieving the salvation of Greece from the Persian threat.”

In our “modern” world of paper ballots we have had rigged elections:

1948 —Senate race in Texas—Lyndon Johnson vs. Coke Stevenson—Stevenson had won until Johnson “found” 200 more votes for himself.

“Vote” is from Latin word votum “a vow, wish, promise to a god, solemn pledge, dedication,” noun use of neuter of votus, past participle of vovere “to promise, dedicate.” From Etymological Dictionary—Article by Sandra Sweeny Silver 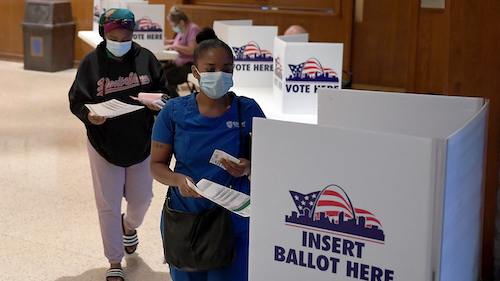