After the Christians won the right to religious liberty in 313, Lactantius in On the Deaths of the Persecutors 16 wrote to his Christian friend Donatus, who had been imprisoned and tortured for his faith.     Lactantius (240-320 AD) used a metaphor from the chariot races to describe the great victory his friend and countless other Christian martyrs had achieved by their blood and their endurance. Lactantius begins with “how pleasing the spectacle to God when He beheld you (all) a conqueror.”

The word “spectacle” is from the Latin spectaculum meaning “a public show,” and is the same word Romans used for the chariot races in the Circus Maximus. For the Romans the chariot races were spectacles, were spectacular. Lactantius is saying, God is pleased when he beheld Christians as the winners in the centuries-long and grueling race for religious freedom. He sees it as a triumph in the Circus Maximus over “those very men who had led captive the nations (the Romans).” The Christian warriors like the chariot drivers in the arena at Rome had persevered and were tough enough to have won the race, to have triumphed:

“How pleasing the spectacle to God when He beheld you a conqueror, yoking in your chariot not white horses… but those very men who had led captive the nations! After this sort to lord it over the lords of the earth is triumph indeed!….No violence could bereave you of your fidelity and persevering resolution. This it is to be a disciple of God and this it is to be a soldier of Christ; a soldier whom no enemy can dislodge or world snatch from the heavenly camp; no artifice ensnare or pain of body subdue or torments overthrow.”

There would, of course, have been no chariot races without the horses. As in our day with the Kentucky Derby and other races, horses for the chariot races were specially bred. The Spanish-bred Andalusian horses were considered the best and it is not incidental that some of the greatest heroes of the ancient races, including young Scorpus and Diocles, were born in Iberia, in Spain.

The training of a race horse would begin about the age of 5 and their careers could last up to 20 years after which time they became sires for hopefully breeding more winners. In the Inscription to the famous charioteer Diocles it records: “He made nine horses 100-time winners, and one a 200-time winner.” A hundred-time-winner horse was commonly referred to as a “centenary.”

The lead horse in a chariot race was often as famous or more famous than the driver. Sports fans knew the breeding line and the intimate details of the horses they adored.

Some of the names of hero race horses were: Abigieus, Lucidus, Cotynus, Galata, Pompeianus. The names mean nothing to us now, of course, but the mere mention in the stadium of “Abigieus” would drive the people crazy. Emperor Nero was crazy and was a fan of a horse called Incitatus. Incitatus was so important to Nero that the horse had its own marble stable, ivory stall, purple blankets, jeweled collar and his own furnished house and team of slaves.

The Spanish Andalusian horse, known as the Horse of Kings, had been used by Roman and other Generals of armies as a war horse for centuries before the chariot races. They were/are strikingly beautiful horses. standing at about 15.1 hands (61 inches), and are intelligent, docile and sensitive to humans. The forward thrust of their haunches gave them power and just enough speed to gallop the straightaways and still be able to negotiate the dangerous turns at the two metae, the turning posts where most of the riders could overturn and be trampled to death. The chariot, driver and horses had to complete 7 full laps around the Circus Maximus for a total of about 3-4 miles.

The lead horse, the best and most experienced horse, was on the inside of the charioteer’s left and often became as famous as the charioteers. The image below is of a charioteer driving for the Red Faction. There were four racing teams—the Reds, the Blues, the Greens and the Whites. This driver for the Red Team has the palm branch of victory in his right hand. To the cheers of the audience of up to 250,000 people, he is parading his team several times around the Circus Maximus. 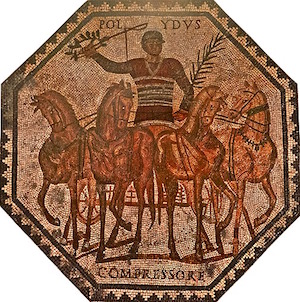 This Roman mosaic, the centerpiece of a large floor in an imperial bath, was found in Trier, Germany. The driver carries the palm branch in his left hand and the laurel wreath in his right hand. We know his name is Polydus. The name of his lead horse (on the right) is Compressore. Romans craved the chariot races as some today crave horse racing. An ancient inscription on the mosaic of a north African bath house says of a favorite horse: “Vincas, non vincas, te amamus, Polydoxe!”: “Win or lose we love you Polydoxes!” Their names were as famous in the Roman world as they are in ours.’

Below is a Roman lamp featuring the lead horse in a chariot race. The placard the man ahead of the horse is carrying would bear the horses’s name and the number of victories he had won. 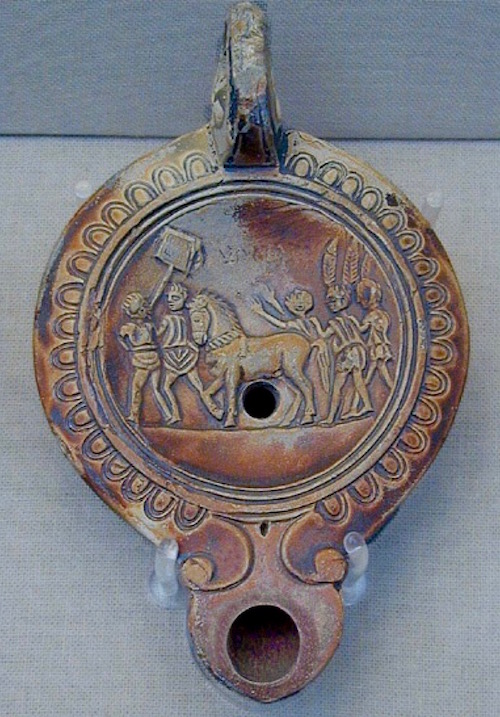 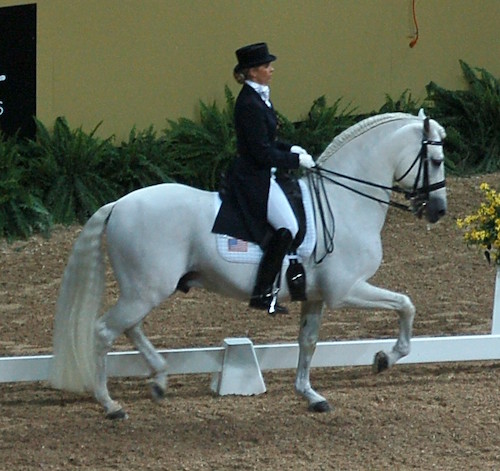 A pre-show advertisement of an Andalusian for sale

There has always been a bond between man and horse. One would like to think the anonymous and the famous horses of yesteryear and of today have a knowledge/instinct for how important they were and are to man and to history.—Sandra Sweeny Silver