The Roman General Julius Caesar entered Egypt in c. 48 BC and became an ally and lover of Egypt’s Queen Cleopatra.

Caesar and Cleopatra had a son, Caesarion, during the three years they were together.

Cleopatra (21) “met” Caesar (52) by having herself “delivered” to him in a rug, according to the historian Plutarch. (Watch the short video below for a dramatization of this unique event.)

But unlike his rival Mark Anthony, Caesar was able to escape the arms and charms of Cleopatra and returned to Rome where he initiated the Egyptian Calendar in 45 BC.

The Roman Calendar was called the AUC from Ab Urba Condita, “From The Founding Of The City (of Rome).” The AUC calendar had been so inaccurate that even though Caesar had crossed the Rubicon on January 10, 49 BC, several years later that date fell in mid-Autumn. 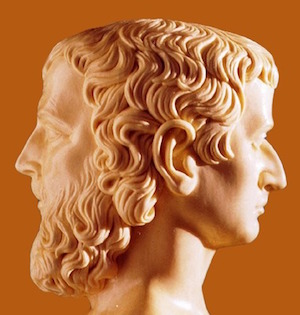 Caesar had seen the Egyptian calendar was a simple one of 365 days with an extra day (an intercalary leap year day) every fourth year in order to make up for the drift of the vernal equinox. Caesar wanted the new calendar to begin with his rule, but the Senate had always started a new year on January 1, the month named after the god Janus who had two faces, one looking ahead to the future and the other looking back to the past (right).

July1 (named after “Julius’) is not the start of our New year. January 1 and the god Janus still stands guard over his territory.

The Julian Calendar would be used for the next 1,600 years.

CLICK HERE for article on Julius Caesar and the Julian Calendar

But the Christian Church had for centuries used a different calendar for its main celebration—The Resurrection of Jesus, Easter aka Pascha (Hebrew for “Passover”). The Church Calendar, based on a lunar system, had been devised at The First Council of Nicea in 325 to ensure the Church celebrated Easter on the exact Sunday of the Resurrection. The Church in Alexandria, following a solar calendar, had always celebrated Easter on the 14th day of the moon that falls on or after the vernal (the Spring) equinox.

The earth revolves around the sun and two times each year, the sun is exactly above the equator (See below). These two times in Sept and March are equinoxes, meaning “equal night,” because the length of a day and a night is almost equal in all parts of the world at those two times. 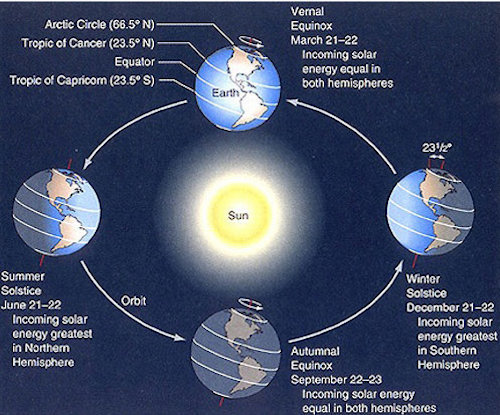 By the 900’s most Christian churches celebrated Easter according to the Alexandrine method. But the vernal equinox drifts. When Julius Caesar established his calendar in 45 BC he set March 25 as the spring equinox. Because a Julian year (365.25 days) is slightly longer than the tropical year, the calendar “drifted” with respect to the equinox such that the equinox was occurring on about March 21 in AD 300 and by AD 1500 it had reached March 11. By the 1500’s both the Church’s lunar calendar and the Julian calendar were off kilter and Easter was being celebrated on the wrong day. 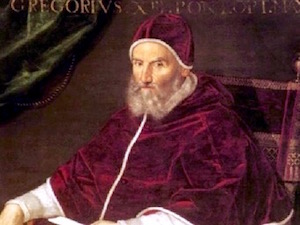 Pope Gregory XIII (left) and the learned ecclesiastics were determined to fix the problem of equinox drift and the confusion over the date of Easter once and for all. To remedy “the drift problem,” the Gregorian calendar dropped 10 days from the year 1582. On Thursday October 4, 1582 the Church adopted what would be called the Gregorian calendar by a papal bull entitled Inter Gravissimas (”Among The Greatest Concern”).

The Christian Church may have had “grave concerns” about the date of Easter being astronomically inaccurate on the church lunar and Julian solar calendars, but the secular world was not obligated by a papal bull. The Catholic countries of Spain, Italy, Portugal and the Polish-Lithuanian Commonwealth, however, adopted the new calendar immediately. Scotland and most Protestant countries adopted Gregory’s calendar in the 1700’s. England and colonial America adopted it in 1752. When Alaska was purchased by the United States from Russia in 1867, the Alaska Territory began to keep Gregorian time. Russia remained on the Julian calendar until 1917 after the Russian Revolution and Greece held on to Julian until 1923. Some tribes and isolated peoples still use the Julian calendar. 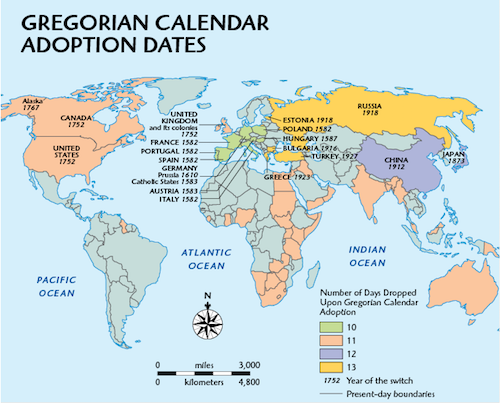 Today, internationally, the Gregorian calendar is the only one used. It is so accurate it has an infinitesimal error of gaining only one day every 3,325 years. The Christian concern over the date of Easter has prevailed even though most of the secular world had no idea there had been a problem.

This divine obsession in the Christian Church on fixing the exact date for the Paschal Celebration had led Dionysius Exiguous (right) in 525 to invent the AD/BC (Anno Domini Year of the Lord and Before Christ) designations used in the Julian and Gregorian calendars.

The monk Exiguus devised an arcane and confusing Paschal Table to project from the past into the future the exact dates of Easter. His Table was so mathematically and astronomically correct it became the basis for not only prognosticating Easter for generations but also for designating with AD/BC everything after and before the birth of Christ.

Calendars were traditionally invented and used to facilitate agricultural plantings and harvests, religious events, the start of seasons, tribal migrations and to chronicle the past.

But since the advent of Jesus of Nazareth, the Christian Western world has been fixated on refining and correctly ascertaining the exact Sunday in each year when Christians are to celebrate His resurrection. Countries with no Christian backgrounds have recognized the Gregorian calendar. Japan adopted it January 1, 1873; Korea on January 1, 1895 and China in 1912. 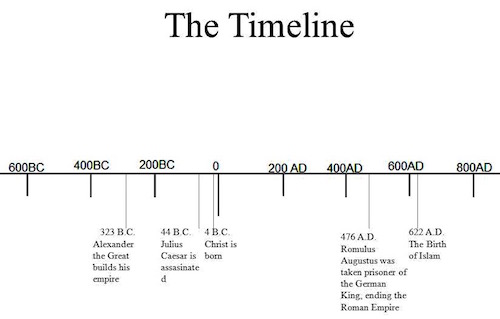 It may be for some an uncomfortable reality, but it is true that for over 2,000 years the world has had to reckon with a young Jewish rabbi who taught, lived, died and, according to His followers and their Bible, resurrected from the dead. The dates on all of our 21st century calendars are reckoned from Him (even if one writes BCE/CE).—Sandra Sweeny Silver