The Chi Rho is a Christian symbol for “Christ” written by superimposing the two Greek letters “Chi (X)” and “Rho (P)” which are the first two letters in Greek of the name of “CHRist.”

The first public use of the Chi Rho symbol was on the labarum, the shield of Constantine’s warriors in the Battle of Milvian Bridge on October 28, 213 AD. Emperor Constantine (reigned 306-337) and his troops saw a miraculous sign in the sky the day before the battle.

Emperor Constantine won the Battle of Milvian Bridge and believed he won because of the symbol of Christ, the Chi Rho, upon the shields of his men. Several months later, Constantine in the Edit of Milan declared Christianity legal in the Roman Empire. The almost three hundred years of Imperial Persecution against Christians were over.

Years after the battle, Constantine the Great related to Eusebius, Bishop of Caesarea, the miraculous event that happened to him shortly before that battle:

“He said that about noon, when the day was already beginning to decline, he saw with his own eyes a trophy of a cross of light in the heavens, above the sun, and bearing the inscription, ‘Conquer By This Sign.’ At this sight he himself was struck with amazement, as was his whole army also, which followed him on this expedition, and witnessed the miracle. (Constantine) said, moreover, that he doubted within himself what the import of this apparition could be. And while he continued to ponder and reason on its meaning, night suddenly came on; then in his sleep the Christ of God appeared to him with the same sign which he had seen in the heavens, and commanded him to make a likeness of that sign which he had seen in the heavens and to use it as a safeguard in all engagement with his enemies….the victorious emperor himself long afterwards declared (this) to this writer of history when he (Eusebius) was honored with his acquaintance and society, and (Constantine) confirmed his statement by an oath.” Eusebius, Life of Constantine 28.29

Eusebius wrote his biography of Constantine in Greek. Constantine saw three Greek letters in the sky: In Touto Nika, “In This (Sign) Conquer.”

The same phrase, more familiar to us when translated into Latin, is: In Hoc Signo Vinces, “In This Sign Conquer” or just In Hoc Signo, “In This Sign.” The meaning of “IHS” has been expanded over the centuries: it is the first three letters of the spelling of “Jesus” in Greek (iota, eta, sigma); in Latin “IHS” is Iesus Hominum Salvator meaning “Jesus, Savior of Mankind;” and in modern English “IHS” is often used by Christians to mean “In His Service.” 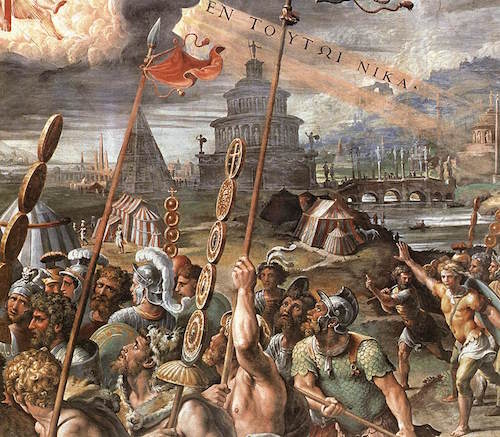 Roman armies carried upright metal standards called signum into battles. From the time of the Republic most standards had SPQR on them. 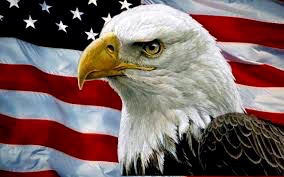 Those letters in Latin are the first letters of the four words Senatus Populus Que Romanus standing for (in the name of) “The Senate And The People Of Rome.” (Modern manholes in Rome enigmatically bear “SPQR” on their covers.) Often the symbol of Rome, an Eagle, topped the Roman military standard. (The USA has had the bald eagle as a symbol of its nation since 1782.)

Under the traditional ancient Roman symbol on top of the standard was a flag with the emperor, often with his children, depicted and embroidered on it. Eusebius confirms that Constantine had the Chi-Rho on top of the military standard as well as a banner of himself and his children configured under it:

“Now it was made in the following manner: A long spear, overlaid with gold, formed the figure of the cross by means of a transverse bar laid over it. On the top of the whole was fixed a wreath of gold and precious stones, and within this, the symbol of the Savior’s name, two letters indicating the name of Christ by means of its initial characters, the letter P being intersected by X in its center, and these letters the emperor was in the habit of wearing on his helmet at a later period. (A silver medallion struck in 313 in Ticinum shows Constantine with a small Chi-Rho on his helmet above his right eye.) From the crossbar of the spear was suspended a cloth, a royal piece, covered with a profuse embroidery of most brilliant precious stones which, being also richly interlaced with gold, presented an indescribable degree of beauty to the beholder. This banner was of a square form, and the upright staff, whose lower section was of great length, bore a golden half-length portrait of the pious emperor and his children on its upper part, beneath the trophy of the cross (the Chi-Rho) and immediately above the embroidered banner. The emperor constantly made use of this standard (now called the labarum) as a safeguard against every adverse and hostile power and commanded that others similar to it should be carried at the head of all his armies.” Life of Constantine 31

The use of the Chi Rho symbol preceded the use of it by Constantine. In the first hundred years of the faith, it was a secret sign for Christians to identify themselves to each other and was used in catacomb art from the c. 150’s through the 350’s AD.—Article by Sandra Sweeny Silver