Do you consider this a MASK? 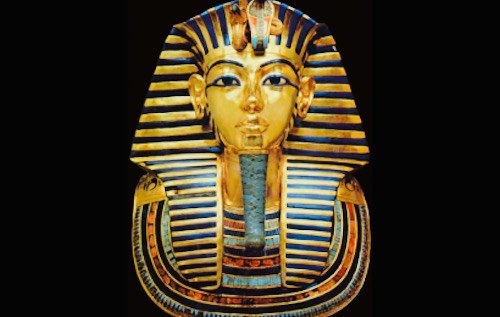 It is called “The Death Mask of Tutankhamun,” a very young (c. 18?)  Pharaoh of Egypt; made of gold, lapis lazuli, turquoise, carnelian and obsidian in c. 1323 BC in Egypt and placed in his tomb. The tomb went undisturbed for c. 3,000 years until Howard Carter discovered it in the Valley of the Kings in Egypt in 1922. 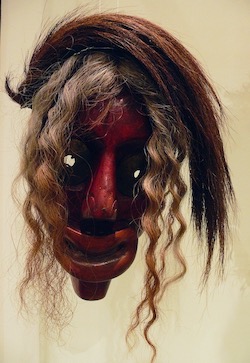 Do you consider this a mask? (left)

It is/was called a “False Face” among the Iroquois Indians and is made and put on certain people who are called “healers.” Donning this mask, those of the False Face Society perform and have performed these rituals, involving tobacco smoke, in front of the sick for over 1,000 years. 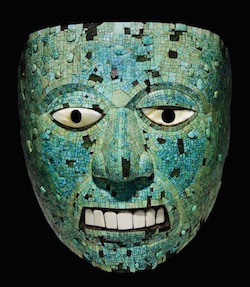 Do you consider this a mask? (right)

A turquoise mosaic mask representing Xiuhtecuhtli, the Aztec  god of fire, 1400-1521 CE. The mask is of cedar wood with mother-of-pearl eyes, conch shell teeth and once with gold  leaf on the eyelids. (The British Museum, London).

All of the above are called “masks.”  For sure, ancient masks are made of a variety of things: gold, wood, precious stones and often ornamented with fake human hair and certain animal parts. All of these are meant to cover the human behind the mask and to make the masked-human powerful.

A veil has the same original purpose—to hide all except the eyes of a woman’s face from a man.

“Now Isaac had come from Beer Lahai Roi, for he was living in the Negev. He went out to the field one evening to meditate, and as he looked up, he saw camels approaching. Rebekah also looked up and saw Isaac. She got down from her camel and asked the servant, “Who is that man in the field coming to meet us?”

“He is my master,” the servant answered. So she took her veil and covered herself.

Then the servant told Isaac all he had done. Isaac brought (Rebekah) into the tent of his mother Sarah, and he married Rebekah. So she became his wife, and he loved her; and Isaac was comforted after his mother’s death. Genesis 24:62-67

Perhaps the most-known veil in the Bible is the one Moses (14th–13th century BC) wore when he came down from Mt. Sinai with the Ten Commandments. Moses’ face “was radiant-shining” and the people “were afraid to come near him.” But Moses gave them the Ten Commandments God had given him, but “when he finished speaking to them, he put a veil over his face” to allay their fears. But Moses would not disguise his face when he went to speak with the Lord. One has to come to the Lord God exactly as one is:

When Moses finished speaking to them, he put a veil over his face. But whenever he entered the Lord’s presence to speak with him, he removed the veil until he came out. And when he came out and told the Israelites what he had been commanded, they saw that his face was radiant. Then Moses would put the veil back over his face until he went in to speak with the Lord.” Exodus 34:30-35

“Setting forth the truth plainly, we commend ourselves to everyone’s conscience in the sight of God. And even if our gospel is veiled, it is only veiled to those who are perishing. The god of this age has blinded the minds of unbelievers, so that they cannot see the light of the gospel that displays the glory of Christ, who is the image of God. … For God, who said, “Let light shine out of darkness,” has made his light shine in our hearts to give us the light of the knowledge of God’s glory displayed in the face of Christ.” II Cor 4:2-6

Again in Paul’s same letter to the Corinthians he uses Moses and the veil analogy:

“We are not like Moses, who would put a veil over his face to prevent the Israelites from seeing the end of what was passing away. But their minds were made dull, for to this day the same veil remains when the old covenant is read. It has not been removed, because only in Christ is it taken away. Even to this day when Moses is read, a veil covers their hearts. But whenever anyone turns to the Lord, the veil is taken away. … And we, who with unveiled faces contemplate the Lord’s glory, are being transformed into his image with ever-increasing glory, which comes from the Lord, who is the Spirit.” II Cor 3:13-18.

Most masks/veils in the ancient world were made to either pretend to be powerful or to follow a currently social law.

Do you consider this a mask? 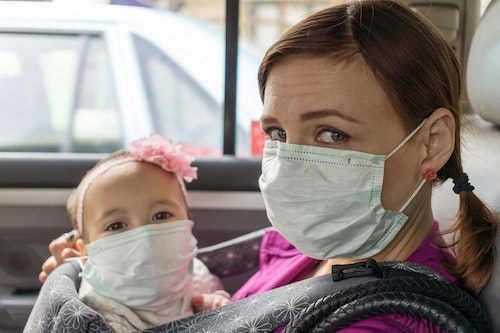 Of course, you do. These cotton masks are worn to protect people against a current flu pandemic in the 2000’s AD.

When Jesus gave his last gasp on the Cross, many amazing things happened:

“And when Jesus had cried out again in a loud voice, he gave up his spirit.

At that moment the veil of the temple was torn in two from top to bottom. The earth shook, the rocks split and the tombs broke open. The bodies of many holy people who had died were raised to life. They came out of the tombs after Jesus’ resurrection and went into the holy city and appeared to many people.

When the centurion and those with him who were guarding Jesus saw the earthquake and all that had happened, they were terrified, and exclaimed, “Surely he was the Son of God!” Matthew 27:50-54

“The veil of the temple” was the place in the Temple in Jerusalem where a thick veil hung. It was meant to keep the Jews and all others except the high priest from going into the Holy of Holies where God was. That veil was torn in two the minute Jesus died because then He had done what He came to do—allow ALL, Jew/Gentile, into the direct Presence of God. There were no more barriers to God. 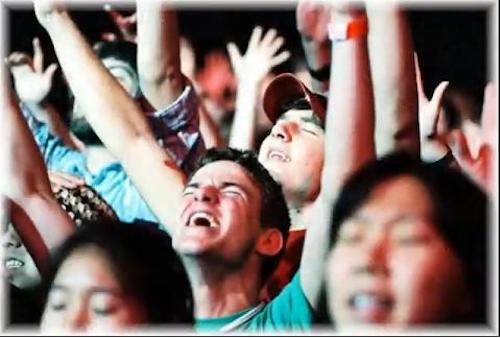