“Now the serpent was more crafty than any of the wild animals the Lord God had made. He said to the woman, “Did God really say, ‘You must not eat from any tree in the garden’?” The woman said to the serpent, ‘We may eat fruit from the trees in the garden, but God did say, ‘You must not eat fruit from the tree that is in the middle of the garden, and you must not touch it, or you will die.’ ‘You will not certainly die,’ the serpent said to the woman. ‘For God knows that when you eat from it your eyes will be opened, and you will be like God, knowing good and evil.’ When the woman saw that the fruit of the tree was good for food and pleasing to the eye, and also desirable for gaining wisdom, she took some and ate it. She also gave some to her husband, who was with her, and he ate it. Then the eyes of both of them were opened, and they realized they were naked; so they sewed fig leaves together and made coverings for themselves. Then the man and his wife heard the sound of the Lord God as he was walking in the garden in the cool of the day, and they hid from the Lord God among the trees of the garden. But the Lord God called to the man, ‘Where are you?’ He answered, ‘I heard you in the garden, and I was afraid because I was naked; so I hid.’ And he said, ‘Who told you that you were naked? Have you eaten from the tree that I commanded you not to eat from?’ The man said, ‘The woman you put here with me—she gave me some fruit from the tree, and I ate it’….The Lord God made garments of skin for Adam and his wife and clothed them. And the Lord God said, ‘The man has now become like one of us, knowing good and evil. He must not be allowed to reach out his hand and take also from the tree of life and eat, and live forever.’ So the Lord God banished him from the Garden of Eden to work the ground from which he had been taken. After he drove the man out, he placed on the east side of the Garden of Eden cherubim and a flaming sword flashing back and forth to guard the way to the tree of life.” Genesis 3:1-12; 21-24

We must know that Eve and Adam’s life in the Garden of Eden was beyond happy. It was idyllic. They had all they could ever want. In fact, they didn’t even know what want and longing were! And then. One fine, perfect Edenic day Eve was out walking. The serpent Satan asked her how she was doing.

“Fine,” said the first woman. “I’m just perfectly fine.” The crafty one asked her, “But you can’t eat of all the trees in the garden, can you? How can you be perfectly fine if there is one thing that you’ll never know. And, I guarantee, that the fruit on that tree is the best, Eve. That fruit from the Tree of the Knowledge of Good and Evil is like none you’ve ever tasted. Are you sure God won’t allow you to taste it?”

Eve should have fled, but she stayed to chat. “Well, we are allowed to eat from every other tree. So what’s the big deal? But, yes, God said that we couldn’t eat of that tree.” She looked at the silent serpent, “And He said we can’t even touch it.”

“You can’t eat it or touch it even? Don’t you think that’s silly, Eve. It’s only a tree.” The serpent sidled closer. “What harm could come from eating or, as you say, touching a little tree?”

Eve blurted out, “’Cause He said we’d die if we did that!” She was tempted to run to Adam, but she was curious about what the serpent would say about that death threat. And what was death anyway? She was intrigued.

The snake drew himself up as tall as he could. Right into her perfect ear he whispered, “You will not die. That’s not true. The reason God doesn’t want you and Adam to eat that fruit is because He doesn’t want you to become like He is. He knows everything. The fruit of that tree gets into you and then you, too, will know good and evil. You will be like Him. He wants you to stay innocent. Can’t you see how He’s playing you, Eve?”

“What do you mean ‘know everything’?” Eve turned to look at the tree. “Everything. Just everything.” The serpent slithered over to the tree. “Look, Eve, have you ever seen the beauty of this fruit? And I’ve eaten it. It’s the best-tasting fruit of them all. It is. Would I lie to you?”

Eve snapped a perfect piece of the fruit off and held it in her hand. It is exquisite, she thought. Exquisite. And he says it’s the best-tasting of all the fruits. She turned it over and over in her perfect hand. Why should we be denied anything, she asked herself. I do want to know everything God knows. I do want to know what that thing called good is. And, also, what is evil? I want to know.

They say that if you look real hard into the Iraqi desert on a black and starlit night you can see “a flaming sword flashing back and forth,” back and forth across the biting, wind-swept sands. — Above by Sandra Sweeny Silver, from her gardening book “Pocket Full of Posies” 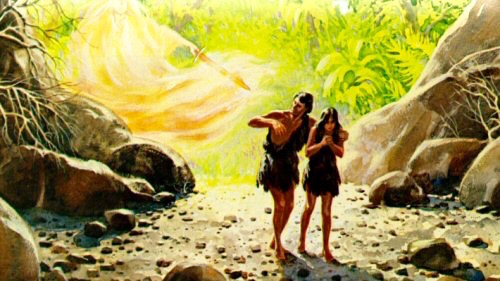