When most people think about Jesus and His Twelve Apostles sharing the Last Supper together (Matthew 26:17-30), this picture is what goes through their minds.

When the Romans defeated the Greeks in 146 BC, they adopted the Greek style of reclining dining (and almost everything “Greek”). 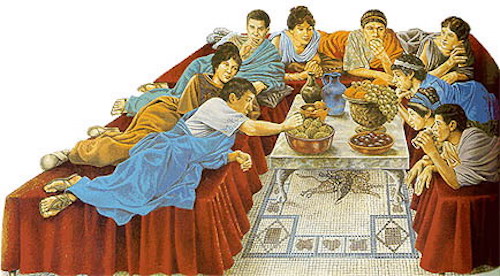 The painting  below (c. late 300’s AD) was discovered on February 25, 1988 in the Romanian city of Constanta. It shows five Roman toga-clad, young Romanized men reclining around a table with food on it. The man at the extreme right with his back turned to us is probably the dead man who is being depicted in his tomb eating and drinking with his best friends as he obviously loved to do when he was alive.

Jesus and His Apostles, living in the days of the Roman Empire and its vast influence over Judea, ate the Last Supper in this Roman manner—leaning on each other on couches. The Apostle John who was at the Last Supper says, he “the disciple whom Jesus loved, was reclining ( Greek anakeimenos) next to (Jesus).” John 13:23

When the Barbarians took over the Roman Empire in the 400’s AD, they did not recline and we have not reclined for over 1,600 years. If one has tried to eat like the reclined Romans and Greeks, it is not “comfortable.”

Even the great 19th century painter James Tissot (1836-1902) who KNEW Jesus and the Twelve had reclined had “trouble” painting the 12 plus Jesus at the Last Supper.—Article by Sandra Sweeny Silver