The following letter written in 174 by Emperor Marcus Aurelius was found attached to a copy of the Christian apologist Justin Martyr’s First Apology. Aurelius recounts an incident that occurred in the old Austrian city of Carnuntum where the Emperor lived from 172-175 while fighting the Marcommani and Quadi, German tribes. The letter, Epistle To The Roman Senate, recounts what happened when he was imperiled, stranded without his Legions and almost forced to surrender because he and his men had no water:

“…in consequence of the circumstance that I was surrounded by the enemy….being shut up in Carrnuntum with 74 cohorts nine miles away. And the enemy being at hand, the scouts pointed out to us and our general Pompeianus showed us that there was close on us a mass of a mixed multitude of 977,000 men, which indeed we saw; and I was shut up by this vast host, having with me only a battalion composed of the   first, tenth, double and marine legions. Having then examined my own position, and my host, with respect to the vast mass of barbarians and of the enemy, I quickly betook myself to prayer to the gods of my country. But being disregarded by them, I summoned those who among us go by the name of Christians. And having made inquiry (in his army), I discovered a great number and vast host of (Christians) and I raged against them, which was by no means becoming; for afterwards I learned their power. Wherefore they began the battle, not by preparing weapons, nor arms, nor bugles; for such preparation is hateful to them, on account of the God they bear about in their conscience. Therefore it is probable that those whom we suppose to be atheists have God as their ruling power entrenched in their conscience. For having cast themselves on 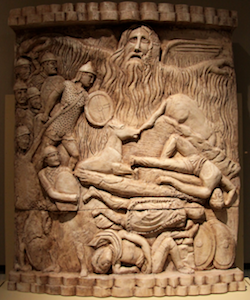 the ground, they prayed not only for me, but also for the whole army as it stood, that they might be delivered from the present thirst and famine. For during five days we had got no water, because there was none; for we were in the heart of Germany, and in the enemy’s territory. And simultaneously with their casting themselves on the ground and praying to God—a God of whom I am ignorant—water poured from heaven upon us refreshingly cool, but upon the enemies of Rome a withering hail. And immediately we recognized the presence of God following on the prayer—a God unconquerable and indestructible. Founding upon this, then, let us pardon such as are Christians, lest they pray for and obtain such a weapon against ourselves…..But if any one be found laying to the charge of a Christian that he is a Christian, and accused of nothing else than only this, that he is a Christian….he who accuses him must be burned alive. And I further desire that he who is entrusted with the government of the province shall not compel the Christian, who confesses and certifies such a matter, to retract….And I command that this my edict to be published in the Forum of Trajan (area in Rome where public business was conducted)…The prefect Vitrasius Pollio will see that it be transmitted to all the provinces round about.”

Roman soldiers were some of the first and most fervent converts to Christianity. They, along with hosts of slaves and civilians who were believers, had been persecuted and killed for their faith for over 100 years when Nero began the Imperial persecution of Christians in 64 AD. Marcus Aurelius, however, was surprised to find such a host of Christians in his own army there in Carnuntum.

Aurelius’ Epistle to the Roman Senate is not the only place in ancient literature where his story of miraculous rain is told. Christian and pagan writers were fascinated by such an unusual tale, especially because it was told by an

emperor. Tertullian tells it in Apology 5; Eusebius recounts it in his Church History 5.5; Orosius in Seven Books Of History Against The Pagans 7.15; Gregory of Nyssa in Oration; Cassius Dio in Roman History 71.8. The weight of so much retelling of the narrative by Christian and pagan writers certainly points to the historicity of an unusual, miraculous rain event as a result of Christian prayer witnessed by Marcus Aurelius at Carnuntum. It was so impressive to Aurelius that he had the miraculous storm event depicted on his column that is still standing in the Piazza Colonna in Rome. Some pagan writers attribute the miracle to Jupiter or an Egyptian god.

If one certifies Aurelius’ Epistle as true, it is ironic that this Philosopher King presided over one of the bloodiest persecutions of Christians—the mass murders in Lyons and Vienne in 177 during his reign. In the fourth year of Aurelius’ reign in 165, Justin Martyr, who had pleaded the Christian case to the 29-year-old Aurelius in 150, was arrested with six of his students, brought before Rusticus the prefect of Rome and confessed, “I am a Christian.” He was commanded to offer sacrifice to the gods and replied, “No right-thinking person falls away from piety to impiety,” whereupon he and his students were “scourged and led away to suffer punishment by decapitation according to the laws.” Anonymous Eyewitness, The Acts Of Martyrdom Of St. Justin And Companions.

Perhaps Marcus Aurelius, who had warned in his Stoic Meditations, “Take heed not to be transformed into a Caesar, not to be dipped in the purple dye” persecuted Christians because, as most of his admirers argue, he was just following Roman law like a good, dyed-in-the purple Caesar. Or maybe he answered one of his own rhetorical questions: “Is it not strange that ignorance and complaisance are stronger than wisdom?” It is likely Aurelius, a self-described “citizen of the Universe,” lived with the same superiority and detachment from earthly matters he displays in his quote: “The Universe is change.  Life is an opinion.”—Sandra Sweeny Silver