Where do you stash money/treasures?

Under your mattress? In a plastic bag in the flour canister? Inside your Christmas decorations box? Taped in an envelope to the back of your toilet? Buried in a jar/can in your back yard? Under your floor boards? 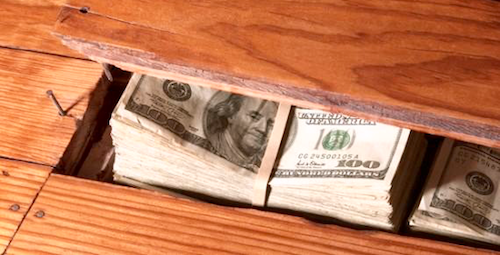 People have been hiding their money and treasures forever. In ancient times (and now) they often hid their valuables in the ground, in the earth. When Jesus was using parables to describe what the “kingdom of heaven” was like, He said:

“The kingdom of heaven is like treasure hidden in a field. When a man found it, he hid it again, and then in his joy went and sold all he had and bought that field.” Matthew 13:44

When one finds salvation, He is saying, he/she forfeits all they are/have and goes “all in” with that treasure which is the “kingdom of God.”

In September of 2018 an amphora, a ceramic vase usually used for storing wine, was discovered filled with pristine gold Roman coins from the 400’s AD. While tearing down and excavating the Cressoni Theater in Como, Italy to build a new apartment building, a glitter of gold was seen. Now, “all that glitters is not gold,” but there were 300 or so mint-pure gold coins hidden in a jar in that basement. 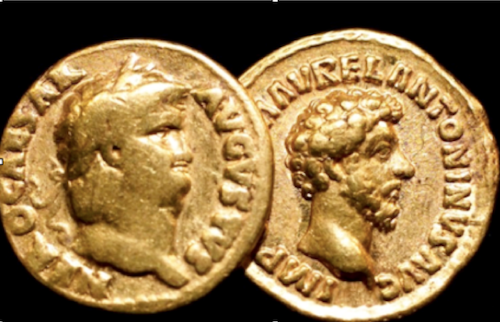 Of course, no one will ever know the horde’s owner or his reason for hiding his wealth in such a place.

In 2017 in Mezdra, Bulgaria neighbors had been complaining to the authorities that the yard next to theirs was an eyesight. When they began to clear the unsightly lot and uprooted a plum tree, they found, entangled in the roots, a clay pot with a cache of 200 silver Roman coins dating from Emperor Nero (54-68 AD) all the way up to Emperor Severus Alexander (222-235 AD). Obviously, the plum tree was not planted at that early time, but someone/sometime in the previous c. 1,800 years had hidden their treasure in that spot—long before Mezdra was even Mezdra.

The biggest horde of them all was discovered in a farm field near Hoxne in Suiffolk, England on November 16, 1992. A tenant farmer Peter Whatling lost his hammer and asked his friend Eric Lawes to use his metal detector to find it. Lawes found not only Peter’s hammer, but, also, they found in a disintegrated oak chest the most amazing horde of 335 Roman artifacts ever discovered in Britain.

CLICK HERE for article on the Hoxne Metal Detector Find

What did that wealthy man hide in the ground? Not just a lot of ancient Roman money. Jewelry and golden objects—galore.

Some in our day consider hiding one’s valuables and money in the earth is the safest way to keep them. Obviously, most of the ancient world agreed. However, none of the above were able to retrieve their buried treasures.

Christians usually rank their treasures as God first, Family second, Friends third: For “where your treasure is, there your heart will be also.” Matthew 6:2

What are your treasures and where are they stashed?—Article by Sandra Sweeny Silver