In Homer’s Odyssey, the famous Helen of Troy uses a special drug, a φάρμακον (Greek pharmakon from which we get our word “pharmacy”, a place where one gets “drugs.”)  Helen is called “the face that launched a thousand ships” because she “triggered” the 10-year Trojan War in c. 1194–1184 BC.

This writer would love to go on and on about the crucial importance Homer’s two books, the Iliad and the Odyssey, have had on the world in the last 3 thousand years and about Homer himself about whom we KNOW NOTHING definitively, but that is not the subject here.

The following is what Helen of Troy served to her guests:

“She (Helen) put a drug into the wine from which they drank. (The drug) was against sorrow and against anger. It made one forget all bad things.  Whoever swallowed it, once it was mixed with the wine into the mixing bowl, could not shed a tear from his cheeks for that day,  even if his mother and father died or if he had earlier lost a brother or his own dear son, killed by bronze weapons—even if he saw it all happen with his own eyes…. When Helen had put this drug in the bowl, and had told the servants to serve the wine round, she said:

‘Menelaus, son of Atreus, dear to Zeus, and you my good friends, sons of honourable men, which is as Zeus wills, for he is the giver both of good and evil, and can do what he chooses, feast here as you will, and listen while I tell you a tale in season…’” Odyssey 4.220–240 Sourcebook

As an aside, until 1871 experts and people with interest had always believed that Homer’s books were pure fiction/mythological. But a German businessman  named Heinrich Schliemann was raised by a mother who read the Illiad to him as a child and told him it was all true. He became a millionaire and with the Illiad in one hand and the spade in the other discovered the ancient ruins of Troy under the Hisarlik hill in Turkey.  And Schliemann married a Greek woman named Sophia, whom he called Helen.

It is widely assumed Helen’s narcotic was opium. Some assert this drug from the the poppy plant (Papaver somniferum) dates way back to 3400 BC to the Sumerians in Mesopotamia who called the drug “Hul Gil” meaning the “joy plant.”  This writer could find no objective evidence for this common assertion. But we do have evidence of the use of opium in Nimrud (1365–1050 BC), an ancient Assyrian city in the NIneveh plains in Upper Mesopotamia. The milky latex sap of opium poppies contains isoquinoline alkaloids. An alkaloid is any of a class of nitrogenous organic compounds of plant origin which have pronounced physical actions on humans

Hippocrates (460-357 BC), the “father of medicine,” acknowledged opium’s usefulness as a narcotic in The Corpus, a collection of 70 medical works. He prescribed for certain diseases “drinking the juice of the white poppy (below) mixed with the seed of nettle.” 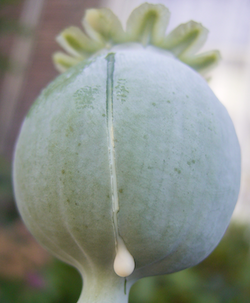 Dioscorides (40-90 AD), a Greek physician in his On Medical Material warns against overdosing on opium. “It kills,” he says wisely. Dioscorides was also familiar with cannabis/marijuana and reported that extensive use of that drug tended to sabotage the user’s sex life.

The Greek Herodotus (c. 484-425 BC) wrote The Histories  so-named from the Greek words Ἱστορίαι Historíai, meaning a detailed record of his “inquiry.” His books contain so much information about so many things, places, people who lived and were observed by him that he is called the Father of History.

Recounting the funeral ceremonies of the nomadic Scythians (in modern Ukraine and parts of Russia), the historian reports in Book 4: “The Scythians, as I said, take some of this hemp-seed, and throw it upon the red hot stones.” When the hemp began to smoke and release a vapor, the “Scyths, delighted, shouted for joy.”

Herodotus says the Scythians (500 BC—c.300 BC) made garments of hemp so fine they were like linen. They “make seeds from the hemp and throw them on red-hot stones, where (they smoulder) and give off fumes,…They cover this with mats and crawl under while fumes emerge so densely that no Greek steam bath could produce more. The Scythians howl with joy at their vapour bath.” Histories Book 4  Herodotus’ account represents the earliest evidence in writings of cannabis’ use as an hallucinogen.

The Assyrians (2334 BC—2154 BC) called marijuana qunubu, meaning “way to produce smoke”—a probable origin of the modern word “cannabis”. Cannabis is the scientific name for marijuana.  At the Jirzankal cemetery in the Pamir Mountains in western China was found the oldest evidence of marijuana use “equipment” (below) going back to c. 2500 BC. 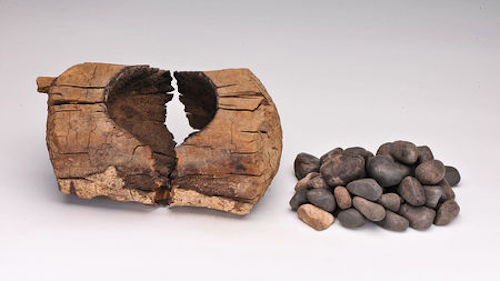 Medical uses of cannabis were supposed but few concrete evidence had been found. In the 1990’s a Roman tomb from the 300’s AD was found near Jerusalem. It contained a 14 year-old girl who had died in childbirth. Found in her womb was a substance at first thought to be incense, but upon scientific analysis it was tetralydrocannabinol, a component of cannabis. One hopes and imagines it was given to her during a difficult childbirth which ended in her death.

Chemical analyses recently confirmed that the earliest alcoholic beverage in the world was a mixed fermented drink of rice, honey, and hawthorn fruit and/or grape. The residues of the beverage, dated to c. 7000–6600 BC, were recovered from the early pottery below found in Jiahu, a Neolithic village in the Yellow River Valley in China. 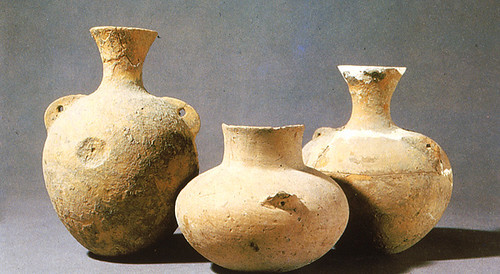 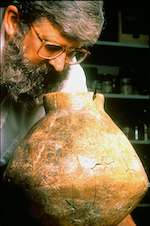 The earliest evidence for wine production (in the form of chemical residues inside pots) is from Iran at Hajji Firuz Tepe in the northern Zagros mountains (left).

The Ebla Tablets (discovered in Syria in 1974 AD) dating from 2500 BC, provide evidence that Sumerian Ebla was brewing significant quantities of beer at that time.

CLICK HERE for article on Hebrews in the Ebla Tablets

In 1944, the Sumerologist Samuel Noah Kramer provided a detailed and readable summary of the decipherment of the Sumerian language in his Sumerian Mythology. We are grateful to the epigrapher Kramer and all others who have spent their lives deciphering ancient languages for us.

In Mesopotamia (ancient Iraq) early evidence of beer is a 3,900-year-old Sumerian poem honoring Ninkasi, their goddess of beer (below). 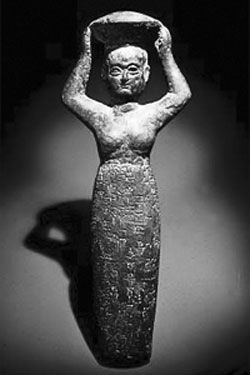 You are the one who holds with both hands the great sweet wort, Brewing with honey wine Ninkasi, You the sweet wort to the vessel,

Ninkasi and Beer appear often in Sumerian literature. In their story “Lugalbanda and the Anzud bird”, the king vows to entertain the Anzud bird and his family at a banquet, with:

“Ninkasi the expert who redounds to her mother’s credit. Her fermenting-vat is of green lapis lazuli, her beer cask is of refined silver and of gold. If she stands by the beer, there is joy, if she sits by the beer, there is gladness; as cupbearer she mixes the beer, never wearying as she walks back and forth, Ninkasi, the keg at her side, on her hips; may she make my beer-serving perfect.”

Confirmed written evidence of ancient beer production in Armenia can be obtained from Xenophon in his work Anabasis (5th century BC) when he was in one of the ancient Armenian villages where he wrote:

“There were stores within of wheat and barley and vegetables, and wine made from barley in great big bowls; the grains of barley malt lay floating in the beverage up to the lip of the vessel, and reeds lay in them, some longer, some shorter, without joints; when you were thirsty you must take one of these into your mouth, and suck. The beverage without admixture of water was very strong, and of a delicious flavour to certain palates, but the taste must be acquired.”

We see evidence of drugs in all of ancient Europe. What about ancient Mesoamerica?

The alcoholic drink Pulque, or octli is made from the fermented juice of the maguey aka the century plant. Pulque is found on Native American/Mesoamerican  stone carvings dating to c. 200 AD.

Balché is the name of a honey wine brewed by the Maya. The bark of the balche tree was fermented in water along with the honey of the indigenous honey bee. It, like ancient alcohols, was associated with a Mayan deity,  Acan.

Chicha comes from the Andes (Inca civilization) of South America. It can be made of maize, manioc root (also called yuca or cassava) or fruits among other things. It is still brewed and consumed today.

The Iroquois Indians in northern America fermented sap from the sugar maple tree to produce a mildly alcoholic beverage. That is still to be “re-invented” in the US of A—MAYBE.

The Bible, also, has a few things to say on “fermented drinks” and on LIFE.

Deuteronomy 32:33 – “Intoxicating wine is like the poison of serpents, the cruel venom of asps.”

Psalm 104:14-15 “He (God) makes grass grow for the cattle, and plants for people to cultivate— bringing forth food from the earth: wine that gladdens human hearts, oil to make their faces shine, and bread that sustains their hearts.”

Proverbs 23:29-35  “Who has woe? Who has sorrow? Who has strife? Who has complaining? Who has wounds without cause? Who has redness of eyes? Those who tarry long over wine; those who go to try mixed wine. Do not look at wine when it is red, when it sparkles in the cup and goes down smoothly. In the end it bites like a serpent and stings like an adder. Your eyes will see strange things, and your heart utter perverse things. ..”

1 Timothy 6:17 “As for the rich in this present age, charge them not to be haughty, nor to set their hopes on the uncertainty of riches, but on God, who richly provides us with everything to enjoy”

Proverbs 2:1-22 “My son, if you receive my words and treasure up my commandments with you, making your ear attentive to wisdom and inclining your heart to understanding; yes, if you call out for insight and raise your voice for understanding, if you seek it like silver and search for it as for hidden treasures, then you will understand the fear of the Lord and find the knowledge of God.” 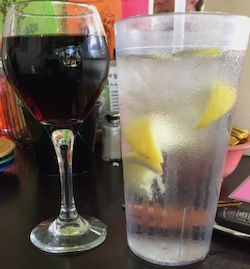