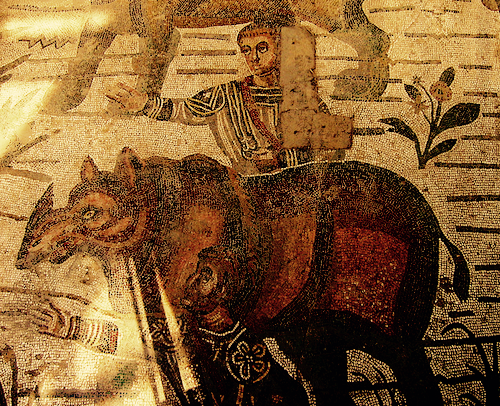 For wild animal hunts (Lat. venationes), the entire arena in the Colosseum was landscaped to resemble a lush jungle. Lions, leopards, bears, wild boars, jaguars, panthers, ostriches, tigers, ibex, rhinos, wild sheep, elephants and any animal that was not tame and was foreign and unusual was captured, presented to the Roman people for their pleasure and then “hunted” and killed. Roman ships sailed to Africa and Asia to hunt exotic animals for the venationes. 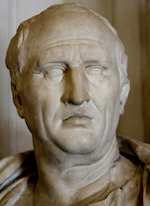 Many people were involved in the business of procuring exotic animals for the popular wild animal hunts in the Colosseum, among whom was the orator and statesman Cicero (106-43 BC) who saw nothing strange about capturing wild animals to be killed in the Circus Maximus or the Colosseum.

In fact, his friend Rufus constantly asked him to provide pantherae for all the games. Pantherae was generic for leopards, lions, jaguars or panthers. Cicero was at this time governor of Cilicia in Asia Minor (Turkey) and had access to people whose business it was to hunt and sell wild animals. Cicero wrote to Rufus:

“About the panthers, the usual hunters are doing their best on my instructions. But the creatures are in remarkably short supply….the matter is receiving close attention, especially from Patiscus….Whatever comes to hand will be yours, but what that amounts to I simply do not know.” Letters 2.11.2

Even though Cicero was making a lot of sesterces by being a middle man in the capturing and shipping of animals to be killed in the hunts, he seemed to have had a few qualms when he actually saw a hunt:

“The rest of the hunt took place twice a day for five days. They were magnificent, nobody denies that. But what pleasure can there be for a civilized man when either some powerless man (a Christian perhaps?) is ripped to shreds by a powerful beast or some magnificent animal is transfixed by a spear?” Letters 7.1.1-3 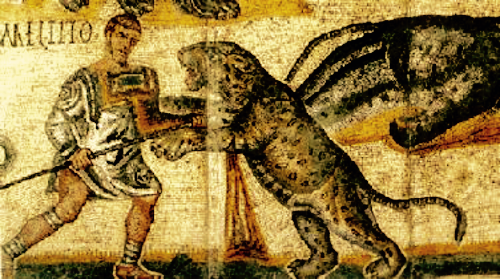 Obviously Cicero became a “civilized man” once he saw what happened to the animals he supplied.

There was another nameless man, the owner of the now-famous Villa Romana del Casale in Piazza Armerina, Sicily. The mosaic floors and walls of his massive Villa cover 37,673.69 square feet of well-preserved mosaics related to hunting, capturing and shipping back to Rome hundreds of wild animals from Africa and India.

The wealthy owner of this country villa obviously liked to hunt locally, also, because many of the mosaics depict Roman scenes of hunting with their dogs and friends. His children liked to hunt rabbits. 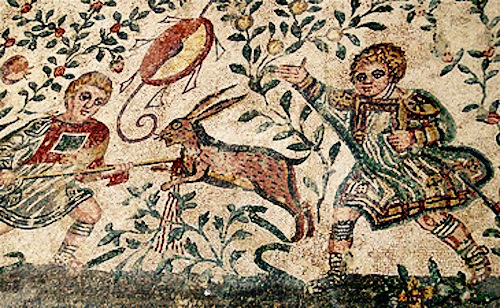 The Roman ritual of young manhood (perhaps his teenage son?) was the killing of his first boar. 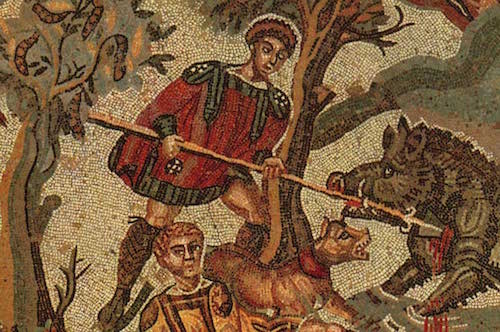 The 4th century owner of the Villa, let’s call him Argenteus, made so much money in his “foreign animals business” and added so many rooms and mosaics to his grand Villa that almost two thousand years later these varied early 300’s AD mosaics, inside and even outside the Villa, have been designated as a UNESCO World Heritage Site. The Villa and mosaics have been so well-preserved because a landslide in the 12th century covered it all. 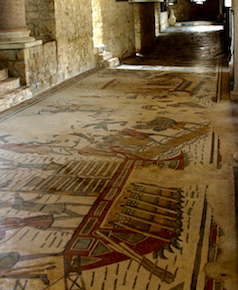 Early in the 19th Century, pieces of mosaics and some columns were found at the Villa.The first official archaeological excavations were carried out later in that century. They found the richest, largest and most complex collection of Roman mosaics in the world. This swath of a floor (right) is only a small segment of one mosaic.

The mosaics at Villa Romana del Casale are so detailed and “true to life” one wonders if the owner of the Villa actually went with his men to Africa and Asia and participated in the Hunt. 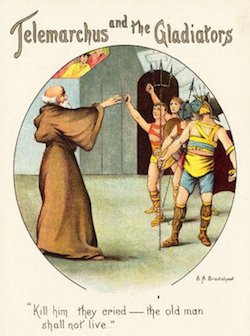 An Egyptian Christian monk named Telemachus visited the Roman Colosseum for the first time in 404 AD. He was appalled by all the slaughter and all the blood shed in the gladiator “games.” He began to shout aloud over and over again, “Cease this in the name of Christ!” The Roman mob stoned him to death.

The Christian Emperor Honorius was convicted and issued a ban on all gladiator fights several days later on January 1, 404 AD. But events involving animals, the venationes, continued until 523 AD. And so did the profitable business of procuring exotic, wild animals for the Roman “games.”— Sandra Sweeny Silver