The Guinness Book of World Records “longest handshake relay in the world” consisted of 1,817 participants and was sponsored by Abu Dhabi Police in Abu Dhabi, UAE, on 29 January 2020 at Umm Al Emarat Park in Abu Dhabi. The Message for this unusual World Record was: “One World One Message.” It celebrated the 1 year anniversary of the signing of the “Document on Human Fraternity for World Peace and Living Together in the city.”

Some say “shaking another’s hand” is a mid-19th century “thing.” Others chase it back to the 1600’s. And others use this quote to illustrate it goes back into the 1500’s in Scotland: “…In 1607 the author James Cleland (believed to have been a Scotsman living in England) proclaimed that instead of things like bowing down to everyone’s shoes and kissing hands, he’d rather ‘retaine our good olde Scottish shaking of the two right hands togither at meeting with an vncouered head.’”

All of the above conjectures about the origin of handshakes are wrong. Shaking hands was done in very ancient times. Several ancient monuments survive which usually depict shaking hands between important people or the gods/goddesses. 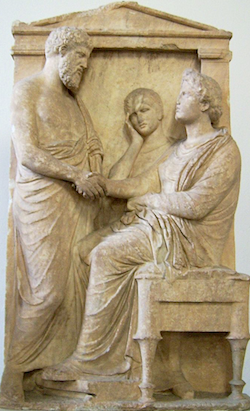 Perhaps this marble carving (left) shows the surviving, bearded husband Thrasea looking deeply into the eyes of his dead wife Euandria wearing a cloak and a chiton and sitting on a cushioned stool.

The husband, no doubt, had erected this monument to his beloved wife. They are shaking hands as a symbol of their love and a hope of their union again in death. The female slave in the background has her hand to her cheek in mourning and was, perhaps, not only a slave to Euandria but her best friend. In this instance, the clasping of hands is a touching gesture of great love.

CLICK HERE for Beards in the Ancient World article

The Assyrian King Shalmaneser III (reigned 859-824 BC) was lord of his world. He was a “conqueror” and many in the Middle East wanted to make peace with him rather than be taken over by him. Even the 10th King of northern Israel Jehu (Reign c. 841–814 BC) prudently sent tribute to him in c. 841 BC. Here Shalmaneser is shaking hands with the King of Babylon in order to assure peace after a revolt. 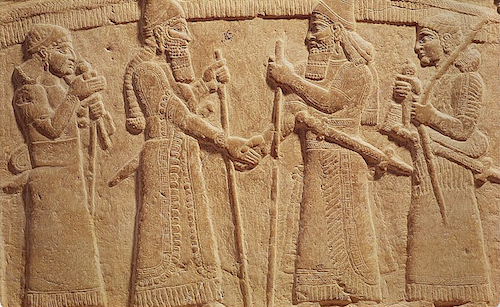 In the Biblical Book of Proverbs by the prolific Solomon references are made to hand shakes.

I Kings 4:32 says: “Solomon spoke three thousand proverbs and his songs numbered a thousand and five.” Solomon (c.970 to 931 BC), a son of King David, asked the Lord to give him wisdom when he became king after David’s death:

Many of the proverbs in the Book of Proverbs were written by this Solomon. There is a common simile today almost 3,000 years after Solomon lived—“like the wisdom of Solomon.”

In the official Hebrew text of the Old Testament called the Masoretic Text there are several references to hand shaking. Translating verbatim from the Masoretic:

Proverbs 6:1—“My son, if you become surety for your friend, if you have shaken in pledge for a stranger hands…” An alternate KJV version reads: “My son, if thou be surety for thy neighbor, if thou hast stricken thy hand with a stranger…”

In the NIV translation of Proverbs 11:15: “Whoever puts up security for a stranger will surely suffer, but whoever refuses to shake hands in pledge is safe.” In the Hebrew in these references to hand shaking, the words are “strike the hand.”

The mentions of “shaking hands” between people goes back to c. 1000 BC or before that. In our modern world hand shaking is often and very casual. Apparently in the ancient world, it was only done when “official” events were happening like this modern one below.

If the reader would like to see many “funny/awkward” modern hand shakes, click the link below.— Sandra Sweeny Silver