There are extra-Biblical historical evidences that not only support the existence of Moses and the Israelites in ancient Egypt but confirm the Exodus itself. Diodorus Siculus (90—30 BC) was a Greek historian whose treatise Bibliotheca Historica (Historical Library) is extant today.

Diodorus traveled and wrote, but his most important contribution to history is his inclusion of other more ancient historians and authors whose works have been lost to us. His books are a treasure trove of ancient history. Diodorus chronicles the Classical Age of the Greeks (c. 510—323 BC) and reaches back over a thousand years into all of ancient history. We will focus on Diodorus’ account of the “origin of the Jews and their customs” in his Historical Library 40.3 and see how his history coincides with the Biblical accounts. 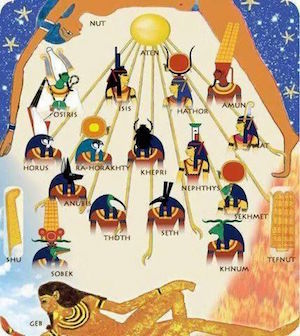 Diodorus begins: “Once we are about to give an account of the war against the Jews, we consider it appropriate, before we proceed further, in the first place to relate the origin of this nation and their customs. In ancient times a great plague occurred in Egypt (See Exodus 12:29,30), and many ascribed the cause of it to the gods (right), who were offended with them. For since the multitudes of strangers of different nationalities, who lived there, made use of their foreign rites in religious ceremonies and sacrifices, the ancient manner of worshipping the gods, practiced by the ancestors of the Egyptians, had been quite lost and forgotten.

Therefore the native inhabitants concluded that, unless all the foreigners were driven out, they would never be free from their miseries.”

Exodus 12:31-33 “During the night Pharaoh summoned Moses and Aaron and said, ‘Up! Leave my people, you and the Israelites! Go, worship the Lord as you have requested. Take your flocks and herds, as you have said, and go. And also bless me.’ The Egyptians urged the people to hurry and leave the country. ‘For otherwise,’ they said, ‘we will all die!’”

Diodorus continues: “The leader of this colony was one Moses, a very wise and valiant man, who, after he had possessed himself of the country, amongst other cities, built that now most famous city, Jerusalem, and the temple there, which is so greatly revered among them.” (Moses did not build Jerusalem. He died before entering Canaan—Deuteronomy 34:5-7)

“(Moses) instituted the holy rites and ceremonies with which they worship God; and made laws for the methodical government of the state. He also divided the people into twelve tribes, which he regarded as the most perfect number; because it corresponds to the twelve months within a whole year. “ (The 12 tribes of Israel came from the 12 sons born to Jacob in Genesis 49:1-28.)

Diodorus: “Moses made no representation or image of gods, because he considered that nothing of a human shape was applicable to God; but that heaven, which surrounds the earth, was the only God, and that all things were in its power.

But he so arranged the rites and ceremonies of the sacrifices, and the manner and nature of their customs, as that they should be wholly different from all other nations; for, as a result of the expulsion of his people, he introduced a most inhuman and unsociable manner of life. He also picked out the most accomplished men, who were best fitted to rule and govern the whole nation, and he appointed them to be priests, whose duty was continually to attend in the temple, and employ themselves in the public worship and service of God. He also made them judges, for the decision of the most serious cases, and committed to their care the preservation of their laws and customs.”

Exodus 18:21,22 “But select capable men from all the people—men who fear God, trustworthy men who hate dishonest gain—and appoint them as officials over thousands, hundreds, fifties and tens. Have them serve as judges for the people at all times, but have them bring every difficult case to you; the simple cases they can decide themselves.”

“Therefore they say that the Jews have never had any king (Saul was appointed Israel’s first king in I Samuel 10:17) but that the leadership of the people has always been entrusted to a priest who excels all the rest in prudence and virtue. They call him the chief priest, and they regard him as the messenger and interpreter of the mind and commands of God.”

Diodolrus continues: “….the Jews are so compliant in these matters, that forthwith they prostrate themselves upon the ground, and adore him as the high priest, who has interpreted to them the will of God. At the end of the laws this is added: ‘This is what Moses has heard from God and proclaims to the Jews.’ (See Numbers 7:89) This lawgiver also laid down many excellent rules and instructions for military affairs, in which he trained the youth to be brave and steadfast, and to endure all miseries and hardships. Moreover, (Moses) (it was Joshua, not Moses who commanded the army that vanquished Canaan—Joshua 1:1-10) undertook many wars against the neighboring nations, and gained much territory by force of arms, which he gave as allotments to his countrymen, in such a way as that everyone shared alike….except the priests, who had a larger portion than the rest; so that, because they had a larger income, they might continually attend upon the public worship of God without interruption. Neither was it lawful for any man to sell his allotment, lest, by the greed of those that bought the allotments, the others might be made poor and oppressed, and so the nation might suffer a shortage of manpower.”

Leviticus 25:14 “If you sell land to any of your own people or buy land from them, do not take advantage of each other.”

Diodorus continues: “(Moses) also ordered the inhabitants to be careful in rearing their children, who are brought up with very little expense; and by that means the Jewish nation has always been very populous. As to their marriages and funerals, he instituted customs far different from all other people. But under the empires which rose up in later ages, especially during the rule of the Persians, and in the time of the Macedonians, who overthrew the Persians, through intermingling with foreign nations, many of the traditional customs among the Jews were altered. . . . This is what Hecataeus…has related about the Jews.” Historical Library 40.3

Diodorus writes at the end of this passage that he received his information about the Jews and their Moses from the then still extant works of the Greek historian/geographer Hecataeus (c.550—c.476 BC).

Hecataeus wrote two books, Journey Round The Earth and History of Egypt, but they survive only in fragments. About 400 years after Hecataeus wrote his books detailing what he had seen and observed of the Jews and their deliverer Moses, his material was read, absorbed and copied by Diodorus. The information conveyed is so precise regarding many of the laws in the Torah that Hecataeus possibly had been able to look at the Torah itself. If the historian Hecataeus went to Jerusalem to gather information for his book in c. 490 BC, the Jews would have returned from the Babylonian Captivity and would have been able to show Hecataeus their Torah, the first five books of the Old Testament. They would have eagerly told Hecataeus of their Leader Moses who led them out of Egypt and who wrote the first five books of their Old Testament. 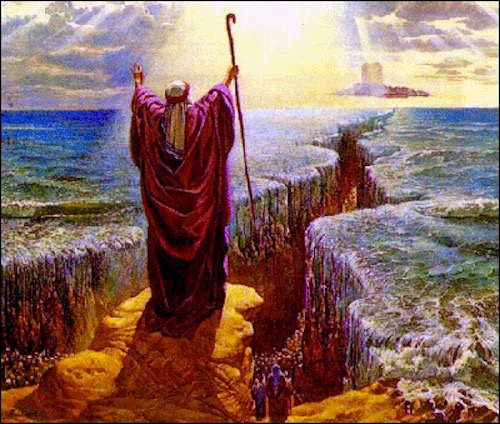 About 400 years after Hecataeus, Diodorus undertook to write another history of the world in his time. His account in Historical Library reiterates the plagues that drove the Israelites out of Egypt under their leader Moses; mentions the 12 Tribes of Israel; the laws and customs given to the Jews by Moses; their conquest of land and one of their 10 Commandments—no graven images, idols.

Diodorus along with Hecataeus and Tacitus, all pagan secular historians, considered the history of the Jews as recorded in the Biblical Torah as historical events and actual people.—Sandra Sweeny Silver

CLICK HERE For “Moses & The Exodus Were Real” Article