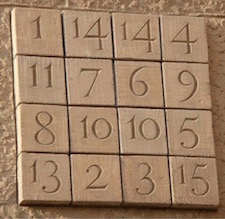 Subirachs’ Magic Square (left), fashioned in 1987, is next to a sculpture in the Sagrada Familia of Judas betraying Jesus with a kiss in the Garden of Gethsemane (below):

“While he was still speaking a crowd came up, and the man who was called Judas, one of the Twelve, was leading them. He approached Jesus to kiss him, but Jesus asked him, ‘Judas, are you betraying the Son of Man with a kiss?’” Luke 22:47,48 Antoni Gaudi (1852-1926) worked tirelessly on the Gaudi Basilica in Barcelona, Spain for 42 years until he died. Antoni Gaudí was dubbed “God’s Architect” by his contemporaries. 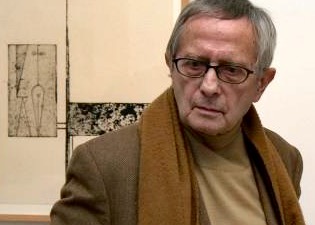 He said he worked “for the glory of God.” Work has continued “steadily and tirelessly” to this day to “finish” the magnificent Church.

Spanish sculpture/painter Joseph Maria Subirachs (left) is one of the many artists who has contributed his art to the Church.

The Square is a grid of numbers on the wall behind the two embraced figures. Judas’ betrayal that Thursday night sealed Jesus’ death, traditionally seen as at age 33. The number 33 can be found by adding any row, column or diagonal from the square. If one adds up from the bottom or down from the top or across beginning at either side or diagonally starting at each end, one “magically” comes up with the number 33. 33 is the “magic constant” in the square.

In the magic square at the Sagrada Família (meaning “Holy Family”) the genius Subirachs has hidden in the numbers that repeat in the Roman alphabet—the initials INRI.

The initials INRI mean Iesus Nazarenus Rex Iudaeorum (Jesus of Nazareth King of the Jews). This is the sign, called the “titular,” that Pontius Pilate had made and insisted be put over the head of Jesus when they crucified Him:

“Pilate had a notice prepared and fastened to the cross. It read: jesus of nazareth, the king of the jews. Many of the Jews read this sign, for the place where Jesus was crucified was near the city, and the sign was written in Aramaic, Latin and Greek. The chief priests of the Jews protested to Pilate, ‘Do not write ‘The King of the Jews,’ but that this man claimed to be king of the Jews’ Pilate answered, ‘What I have written, I have written.’” John 19:19-22—Article by Sandra Sweeny Silver 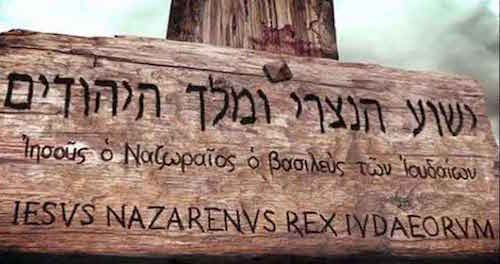