April 14, 1828 Noah Webster (1758-1843) published An American Dictionary of the English Language. In his preface he states his purpose for writing his voluminous dictionary was:

“It is not only important, but, in a degree necessary, that the people of this country, should have an American Dictionary of the English language; for, although the body of the language is the same as in England, and it is desirable to perpetuate that sameness, yet some differences must exist. Language is an expression of ideas; and if the people of one country cannot preserve an identity of ideas, they cannot retain an identity of language.”

Since our childhoods, most American people have turned to Webster’s Dictionary for all definitions of English words. Webster’s original 1828 Dictionary defines the word “Amen:”

“AMEN. This word, with slight differences or orthography, is in all the dialects of the Assyrian stock. As a verb, it signifies to confirm, establish, verify; to trust, or give confidence; as a noun, truth, firmness, trust, confidence; as an adjective, firm, stable. In English, after the oriental manner, it is used at the beginning, but more generally at the end of declarations and prayers, in the sense of, be it firm, be it established. ‘And let all the people say amen’ Psalms 104:1. The word is used also as a noun. ‘All the promises of God are amen in Christ; ‘ that is, firmness, stability, constancy.”

Webster’s Dictionary has over the almost two centuries become a general name for the many dictionaries published under Noah Webster’s name. For the etymology of the word AMEN, Wiki has:

“The word amen (/ˌɑːˈmɛn/, /ˌeɪˈmɛn/)[a] (Hebrew אָמֵן, Greek ἀμήν, Arabic آمِينَ) is a declaration of affirmation first found in the Hebrew Bible and subsequently in the New Testament. It is used in Jewish, Christian and Muslim worship as a concluding word or response to prayers. Common English translations of the word amen include “verily” and “truly”. It can also be used colloquially to express strong agreement, as in, for instance, amen to that.”

Many who read English translations of the Bible will be shocked to discover Jesus in His teachings used the word , amen, “amhn” often (c. 99 times) because the translators chose to translate the Greek word ἀμήν as “Truly” or “Verily.”

John 3:5 KJV
“Jesus answered, Verily, verily, I say unto thee, Except a man be born of water and of the Spirit, he cannot enter into the kingdom of God.” 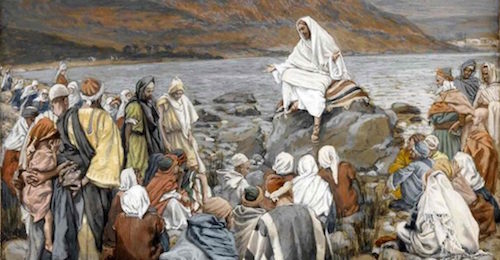 In these verses the English translations are “Truly, truly” and “Verily, verily,” much like the original Webster’s Dictionary explained it: “amen…but more generally at the end of declarations and prayers, in the sense of, be it firm, be it established.”

The New Testament uses the word AMEN about c. 129 times:

Romans 1:25: “They exchanged the truth of God for a lie, and worshiped and served what has been created instead of the Creator, who is praised forever. Amen.”

Revelation 19:4: “The twenty-four elders and the four living creatures fell down and worshiped God, who was seated on the throne. And they cried: ‘Amen, Hallelujah!’”

In contrast, the Old Testament uses the word only about 30 times: 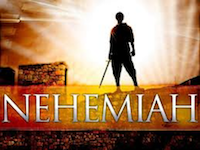 Nehemiah 5:13: “I also shook out the folds of my robe and said, ‘In this way may God shake out of their house and possessions anyone who does not keep this promise. So may such a person be shaken out and emptied!’ At this the whole assembly said, ‘Amen,’ and praised the LORD. And the people did as they had promised.”

The Jew Nehemiah (c.445/444 BC), returning from Babylonian Exile, amid the ruins of Jerusalem (Nehemiah 2:13): “And I went out by night through the Valley Gate to the Serpent Well and the Refuse Gate, and viewed the walls of Jerusalem which were broken down and its gates which were burned with fire.”

Psalm 41:13: “Praise be to the LORD, the God of Israel, from everlasting to everlasting. Amen and Amen.”

In the last book of the Bible, the Book of Revelation, the Hebrew and Greek word AMEN finds its culmination in JESUS AS THE AMEN, the beginning Alpha and the ending Omega, the SO BE IT Witness to TRUTH. (“TRULY”)

Revelation 3:14 (King James Version: “And unto the angel of the church of the Laodiceans write; These things saith the Amen, the faithful and true witness, the beginning of the creation of God.”

The video below is the final scene in the 1963 film LILIES OF THE FIELD directed by Ralph Nelson. It’s the scene where Homer Smith, played by Sidney Poitier, leaves Mother Maria, played by Lilia Skala, after building them a chapel. After taking one last look at the chapel he built, Smith, knowing that his work is done, slips into his car and drives quietly off into the night. The film popularized the song AMEN written by Jester Hairston (1901—2000).—Article by Sandra Sweeny Silver