“On the evening of that first day of the week (the Sunday of His Resurrection), when the disciples were together, with the doors locked for fear of the Jewish leaders, Jesus came and stood among them and said, “Peace be with you!” After he said this, he showed them his hands and side. The disciples were overjoyed when they saw the Lord.

Again Jesus said, “Peace be with you! As the Father has sent me, I am sending you.” And with that he breathed on them and said, “Receive the Holy Spirit. If you forgive anyone’s sins, their sins are forgiven; if you do not forgive them, they are not forgiven.”

Now Thomas (also known as Didymus), one of the Twelve, was not with the disciples when Jesus came. So the other disciples told him, “We have seen the Lord!”

But he said to them, “Unless I see the nail marks in his hands and put my finger where the nails were, and put my hand into his side, I will not believe.”

A week later his disciples were in the house again, and Thomas was with them. Though the doors were locked, Jesus came and stood among them and said, “Peace be with you!”

Then he said to Thomas, “Put your finger here; see my hands. Reach out your hand and put it into my side. Stop doubting and believe.”

Thomas said to him, “My Lord and my God!”

Then Jesus told him, “Because you have seen me, you have believed; blessed are those who have not seen and yet have believed.” John 20:19-29

The above is the passage in John’s Gospel where Thomas received his name, “Doubting Thomas.” “A skeptic, like Thomas,  is a person who doesn’t believe something is true unless they see evidence—coming from the Greek word skeptikos, which means “thoughtful or inquiring.”

There is a lot of clear evidence from Christians in India that Thomas went all the way to India from Palestine and brought many to the Lord even though they had not seen the Resurrected Jesus: “blessed are those who have not seen and yet have believed.”

How did Thomas born in the early 1st century AD and died in 72 AD get to India? He could have taken the normal Silk Road overland to the East as most traders did. But that route did not go into India. It scratched the tippy top of India.

This writer believes: Thomas took the sea route in a trading ship beginning in Rome and ending at Barigaza in northern India or Muziris in southern India. Perhaps he traveled with a Jewish man named Abbanes about whom nothing is known. However, there were in Thomas’ arrival and still are today Jewish communities in India some of whom assert their ancestors went to India in the days of King Solomon in the 900’s BC. To this writer that is an astonishing fact!

We must take the words  of the “Saint Thomas Christians of India” (as they are called) that “the Apostle Thomas landed in Muziris (Cranganore) on the Kerala coast in AD 52 and was martyred in Mylapore near Madras in AD  72.” 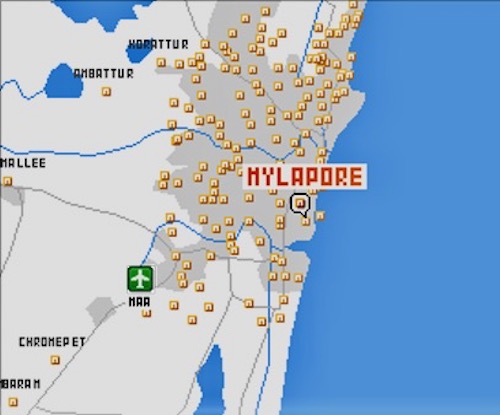 Saint Thomas Christians have passed along through the many generations their facts about Thomas. Some of the families claim Thomas baptized their original forebears: e.g. the Playoors, the Kokkamangalams, etc. in one of the seven churches Thomas established in Kerala. The religious historian Robert Eric Frykenberg said: “Whatever dubious historicity may be attached to such local traditions, there can be little doubt as to their great antiquity or to their great appeal in the popular imagination.” Is he a skeptic like Thomas was?

Thomas the Missionary was killed by uncertain people on July 3, 72 AD. Some say he  was “speared through” by Hindus. Others posit he was killed by natives who hated him for bringing Christianity to India. Others just say “Thomas was killed at St. Thomas Mount in Chennai on 3 July in AD 72, he was castrated, and his body was interred in Mylapore.” Ephrem the Syrian (Died 373) states that the Apostle was killed in India, and that his relics were taken then to Edessa. This is the earliest known record of his death. That is about all one can know for sure.

Thomas, the Doubting One, took the life and resurrection of Jesus of Nazareth almost 3,000 miles from Jerusalem to the people in India. He ministered for 29 years in that land. So many missionaries think their work is futile and will not last after they leave. Use Thomas’ example. He went to India. He did not know the language but God helped him learn it. He was apparently a good builder and God helped him build at least 7 churches for the people who responded to the GOSPEL. He rattled with his message some people who eventually murdered him. BUT you must know that your ministry as a missionary will not be “forgotten, will not have been for naught.”

Thomases’ Jesus Christ is now the 2nd most popular person in India and daily the faith in Him is growing. As of 2020, the population of India was 1.38 Billion. Following  were the number and percentages (of total population) of the four major religions as of 2011: 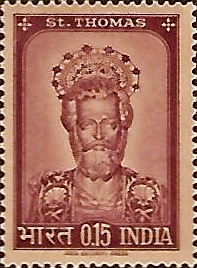 India even made a 1964 modern stamp with Thomas’  name on it. That illustrates all of India is proud Thomas was SENT to India and carried his Lord with him. And India calls him St. (“Saint” meaning “preeminent for holiness”) Thomas. One has to have a STAMP on an envelope before it is SENT OUT LIKE THOMAS WAS SENT OUT.— Sandra Sweeny Silver