The first martyrs for Christ were all Jews who had accepted Jesus of Nazareth as the long-awaited (Hebrew) Mashiach, the Messiah. Stephen, the first Christian martyr, the protomartyr, was a Jew and was stoned to death in Jerusalem in c. 34. (Acts 7:54-60)

Philip the Apostle was scourged, thrown into prison and crucified in c. 54 in Hieropolis (Turkey).

The Apostle Matthew, author of the Gospel of Matthew, was killed by a sword while he was preaching in Ethiopia in c. 60.

James the Just, the Jew Jesus’ brother, was thrown from a parapet in Jerusalem and then clubbed to death in c. 62.

In c. 62 the Apostle Andrew, Peter’s brother, was crucified in Edessa (Turkey) on a cross with two ends affixed to the ground (called the St. Andrew’s Cross).

During the persecution of Christians in Rome under Nero in c. 64-67, the Jewish Apostle Peter was crucified upside down and the Jewish Paul, the Apostle to the Gentiles, was beheaded. Mark, Peter’s amanuensis and author of the Gospel of Mark, was dragged to pieces in Alexandria (c. 68). Matthias, chosen to replace Judas as the twelfth Apostle, was stoned and then beheaded in Jerusalem. The Apostles Jude aka Thaddeus and Simon the Zealot were both crucified in c. 72, Jude in Edessa, Simon in Britain. Doubting Thomas. who doubted Jesus’ Resurrection, went all the way to India to preach the Gospel. He was martyred there in c. 72.

“Then he said to Thomas, ‘Put your finger here; see my hands. Reach out your hand and put it into my side. Stop doubting and believe.’” John 20:27 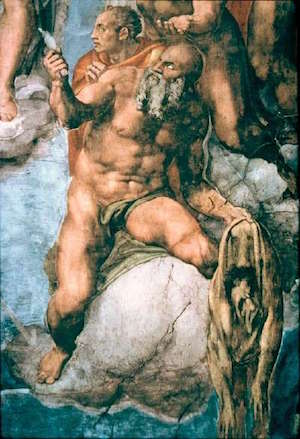 Thomas’ fellow Apostle known as Nathaniel in the East and Bartholomew in Judea was skinned alive in India (or Armenia) at about the same time. Behind the altar of the Sistine Chapel in Rome is a massive fresco called The Last Judgment depicting the Biblical Day of Judgment of all souls. St. Bartholomew is painted displaying the empty envelope of his flayed skin in his left hand. The distorted, tortured face on the limp skin is supposedly the face of the painter Michelangelo (left).

Of all the paintings in the Sistine Chapel where Michelangelo could have chosen to hide his own face, he chose the limp skin of the Biblical character he most admired whom Jesus described as “a true Israelite in whom there is nothing false.” (John 1:47)

Michelangelo was a complicated genius who believed his talent came from God. When he first accepted the commission to do the Sistine Chapel ceiling, he refused pay. Later, he wrote to his brother Leonardo: “Many believe, and I believe, that I have been designated for this work by God….I do not want to give it up; I work out of love for God and I put all my hope in Him.” 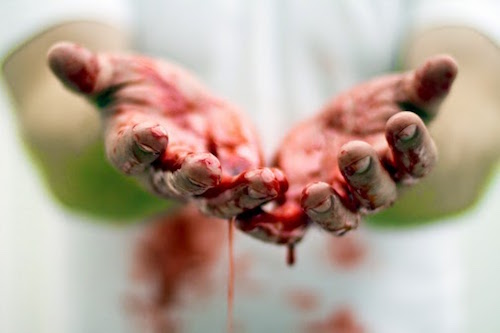 It must be told that the greatest amount of martyred Christians we know from very early Christian historical records were Jewish Christians: all of the Apostles of Christ, except John; all the Seven Deacons of the Early Church; most of the 70 Disciples of Christ and the Jewish Christians in Jerusalem who were slaughtered and/or exiled after the stoning of the Jewish Stephen, the first martyr for Christ. Jews who accepted Jesus of Nazareth as the long-promised in the Hebrew Scriptures Mashiach, the Messiah, were the first to shed their blood for Jesus Christ.—Sandra Sweeny Silver