The dead Egyptian Pharaoh, Amenhotep I (died 1504 BC) is described by the architect Ineny who designed his many royal gardens. When Amenhotep was alive, “he yearned to walk in his garden of the West, cool under its sycamores, and admire its grand and beautiful growths of trees which he had planted while he was on earth.”

One of the many pleasures of a garden is looking at it and walking in or around it. Some of us have planted our own gardens and know the work is hard and never-ending. But if you are a Pharaoh in ancient Egypt, you neither planted your own gardens nor tended to “your” gardens. Amenhotep’s gardens and many of the ancient gardens of the wealthy seemed to have been mainly trees and ponds.

There have ALWAYS been gardens. Mankind was born in a garden, the fabled Garden of Eden. “Eden” is etymologically related to the Hebrew edhen, meaning “pleasure, delight.” Others posit “Eden” comes from the Ugaritic base dn meaning “a place that is well-watered throughout.” When Adam in Eden tasted whatever forbidden fruit given to him by his wife Eve, humankind FELL into SIN and were driven out of the Garden by God. (See Genesis 3)

Nothing has been the same since then. Man forfeited “Paradise,” from an Iranian source similar to Avestan pairidaeza meaning “a park, an enclosure.” (Avestan is within the Indo-European language groups.) And people have forever been seeking the Edenic state in AND out of their gardens. 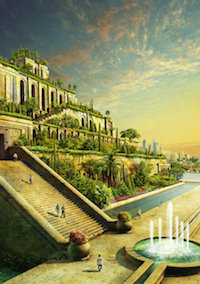 Ancient Persian gardens were legendary. The most legendary and famous garden of the ancient world is the Hanging Gardens of Babylon, one of the Seven Wonders of the Ancient World (left).

It was built by Nebuchadnezzar (king of Babylon from c. 605-562 BC) for his wife Amytis, homesick-for-the-greenery of her native Media . Babylon was just expanses of barren, tan desert, so Nebuchadnezzar who was king of kings in his world, built a c.400 ft wide, c.400 ft long and c.320 ft high Tower of Greenery right there in the middle of the desert. Amytis was very pleased.

Strabo (63-BC-24 AD) says about the tiers and tiers of trees and plants rising magically like a mirage in the desert: “It consists of vaulted terraces raised one above another and resting upon cube-shaped pillars….hollow and filled with earth to allow trees of the largest size to be planted in them.” But how did one water a garden in the air? No one has really figured out with certainty, but Strabo tantalizes us: “The ascent to the highest story is by stairs and at their side are water engines by means of which people appointed expressly for the purpose are continually employed in raising water from the Euphrates into the gardens.”

No one has definitely proved how the gardens in the air were watered from the Euphrates River. A stab was made 500 years ago by a Dutch painter (above), but his engraving does not explore the question of HOW.

Maybe the Hanging Gardens of Babylon are first responsible for the fame of Persian Gardens (above)? Their Persian Carpets were/are filled with gardens (below). The ancient Persians wove their gardens into their homes or tents and enjoyed them under foot. They sat and enjoyed their pleasing patterns inside living rooms just as they watched their gardens outside. 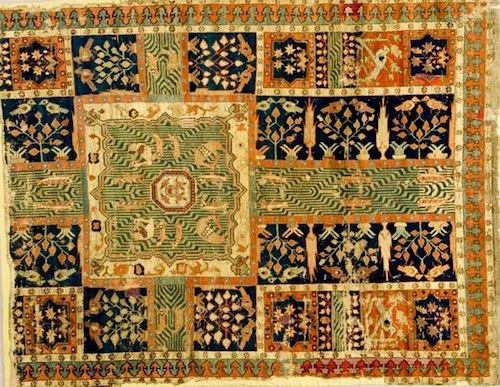 “Charbagh,” meaning “four gardens” Is a Persian/Islamic quadrilateral layout for gardens based on the four gardens in Paradise in the Qur’an. (below). 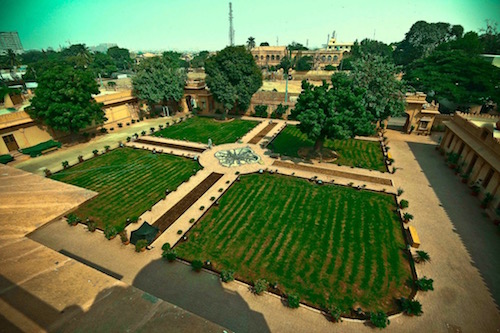 “And a river went out of Eden to water the garden; and from thence it was parted, and became into four heads. The name of the first is Pison: that is it which compasseth the whole land of Havilah, where there is gold; And the gold of that land is good: there is bdellium and the onyx stone. And the name of the second river is Gihon: the same is it that compasseth the whole land of Ethiopia. And the name of the third river is Hiddekel: that is it which goeth toward the east of Assyria. And the fourth river is Euphrates.” KJV

The Qur’an, written between December 609 CE, when Muhammad was 40, and concluded in 632, divides Paradise into gardens bordering those four rivers.

The ancient world loved their gardens as we do today. When we think “gardens,” we often think flower or vegetable gardens. The ancients did grow flowers and vegetables, but for them, gardens were pools of water amid intentionally planted trees and shrubs in a prescribed or proscribed pattern intended to evoke beauty, awe and refreshment. 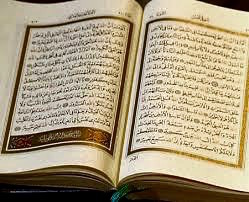 The Muslims believe their Paradise is a garden:
“Allah has promised to the believing men and the believing women gardens, beneath which rivers flow, to abide in them, and goodly dwellings in gardens of perpetual abode; and best of all is Allah’s goodly pleasure; that is the grand achievement.” Qur’an 9.72—Article by Sandra Sweeny Silver