The following contracts from ancient times did not consume much papyrus.

“In the consulship of our masters Licinius Augustus for the 6th time and Licinius the most eminent Caesar for the 2nd time. To Aurelius Eugenius, gymnasiarch and senator of Hermopolis, from Aurelius Psenumis son of Colluthus and Melitina, flute-player, of Hermopolis, greeting. I acknowledge that I have contracted and agreed with you the landlord to present myself at the village of . . . at the vintage of the vineyards which are there along with the appointed grape-treaders and without fault assist the grape-treaders and the other workers by my flute-playing and not leave the grape-treaders until the completion of the vintage of the approaching auspicious 10th indiction; and for the flute-playing and the entertainment I shall receive the prescribed fee from those responsible. This agreement, which I have issued in a single copy, is valid, and in answer to the formal question I have given my consent. The aforesaid consulship, Choiak 24.”

{Signed}   “ I, Aurelius Psenumis, will fulfil the terms of the engagement as stated above. I, Aurelius Pinution, assistant of Anicetus, have written for him, he is illiterate.”

It is interesting to the writer that the owner of this vineyard  below was kind enough to pay for music to accompany the people (or slaves) whom he had assembled and to distract  them from and perhaps enjoy the hard job of the grape-treaders who had to stomp the grapes with their bare feet for hours and hours and hours. 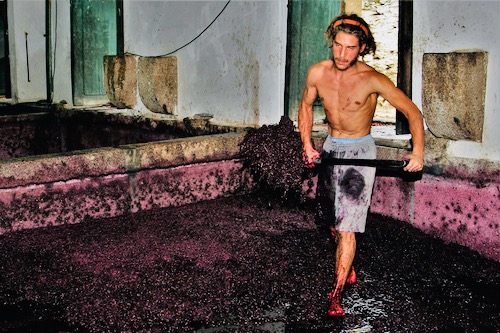 This contract sent to Isadora, a castanet dancer, by the unknown person who is employing her was probably made in June (Pauni). The person who is engaging her was going to have a celebration or a party and wanted his guests to be entertained. Isadora maybe had a “castanet business” and would bring two other dancers with her for six days of performances.

Hope their places of residence were near each other because he was sending two donkeys to get them and then two donkeys to take them back to their town again. Isadora probably made for those six days about $650.00 for those three castanet  dancers; paid each of the other dancers $150.00 and pocketed $350 for herself. Plus the women were swimming in grain and loaves of bread.

“To Isidora, castanet dancer, from Artemisia, of the village of Philadelphia. I wish to engage you with two other castanet dancers to perform at my house for six days from the 24th of the month Pauni according to the old reckoning, receiving between you for wages 26 drachmas for each day and for the whole six days 4 artabas (weights of grain) of barley and 20 pairs of loaves, and whatever garments or gold ornaments you bring down we will safely guard, and we will provide two donkeys for you when you come down and the same when you return. The 14th year of Lucius Septimius Severus Pius Pertinax and Marcus Aurelius Antoninus Pius, Augusti, and Publius Septimius Geta Caesar Augustus, Pauni 16.”

A MARRIAGE CONTRACT WRITTEN BY A “LAWYER”

This contract for a marriage between a woman Thermion and the man Apollonius was apparently written by a lawyer. By this time Rome had a class of lawyers who were called iuris consulti (jury consults). They were not trained in schools of law but were wealthy  men who were interested in laws/contracts and consulted those in need. Perhaps Greece had those men, too. The normal age for a man to be married in the ancient civilized world was about 16-20. The girl was usually about 12-14.

“In the Beginning” God created every thing in the universe and He created a man and a woman on the planet earth. The plan was for them to mate, produce children, take care of the earth and to be together forever until one of them dies:

“Then God said, “Let us make mankind in our image, in our likeness, so that they may rule over the fish in the sea and the birds in the sky, over the livestock and all the wild animals, and over all the creatures that move along the ground.” So God created mankind in his own image in the image of God he created them; male and female he created them….God saw all that he had made, and it was very good. And there was evening, and there was morning—the sixth day.” Genesis 1:26-27; 31

Just as there was “trouble” in the Garden of Eden (See Genesis 3) there are “troublesome” marriages which end in divorce. The word “divorce” comes from the Latin word divortium meaning “separation, dissolution of marriage.” In Middle English in the 14th century the word was divorcen meaning “to dissolve the marriage contract between by process of law.”

Divorces have been recorded as far back as 604 BC. It was usually the man who divorced his wife. But in the 2nd century AD, married women could divorce their husbands as a result of Christian influences.

“Soulis, grave-digger, of the toparchy of Kusis, to Senpsais daughter of Psais and of Tees, grave-digger, of the same toparchy, greeting. Since through some evil spirit it has come about that we have separated from each other in respect of our common wedded life, I, the aforesaid Soul, herewith acknowledge that before sending her away I have received in full all the objects given to her by me in any manner whatsoever and that I will not hereafter take proceedings against her about cohabitation or wedding-gift, but that she is free to depart and marry whom she chooses; and I, the aforesaid Senpsais, acknowledge that I have received in full from him, the aforesaid Soul, all that was given to him by way of dowry, including certain separate objects of my own, or in any other way whatsoever; and we will not henceforth take proceedings against each other about any matter at all of any kind, written or unwritten, because the separation is absolute. This deed of separation, written in duplicate and signed, shall be valid and guaranteed as if deposited in a public record-office, and in answer to the formal question I have given my assent. The 14th year of our lords Constantius and Maximianus Augusti and the 2nd year of . . . [the Caesars Severus and Maximinus].”

RECEIPT FOR WAGES FOR BREAST NURSING

From the beginning of having babies, women have breast-fed their babies. It was the natural way for infants to be fed.

The Old-Babylonian fired clay plaque to the right depicts a woman nursing (breastfeeding) her infant. She has a wonderful hairstyle and wears necklaces and ankle-length dress, and sits on what appears to be a throne or chair.

Because of the creation of the plaque and the woman’s hairstyle and necklaces, she was probably from the upper-class of her time. No matter what class you were in, as a woman, you breast-fed your baby. Until…breast-feeding your own baby became a choice.

One could hire a “wet nurse” to feed your baby. This was especially popular among royal families and the well-to-do in ancient Rome and in the ages to come.

In the below contract a man Chosion is acknowledging that he has received the “400 silver dachmas” (c. $10,000.00) because he had loaned his slave Sarapias to wet nurse Tanenteris’ baby daughter Helena for two years. Wonder how much of that was given to his slave Sarapias? And wondering how the “illiterate” Tanenteris and her “gauardian” Demetrius came up with all that money?

“Chosion son of Sarapion son of Harpocration, his mother being Sarapias, of Oxyrhynchus, to Tanenteris daughter of Thonis son of Thonis, her mother being Zoilous, of the said city, with her guardian Demetrius son of Horion and Arsinoe, of the said city, greeting. I acknowledge that I have received from you through Heliodorus and his fellow supervisors of the bank at the Serapeum by Oxyrhynchus, for which Epimachus issued the promise of payment, 400 silver drachmas of Imperial coin for nurse’s wages, oil, clothing, and all other expenses of the two years for which my slave Sarapias nursed your daughter Helena, styled as daughter of her male parent, whom you have received back after having been weaned and treated with every attention, and that I neither make nor will make any claim upon you nor will take any proceedings about this or about any other matter whatsoever up to the present day. This receipt is valid. The 28th year of the Emperor Caesar Marcus Aurelius Commodus Antoninus Pius Felix Augustus

“If a man fails to fulfill an agreed contract – unless he had contracted to do something forbidden by law or decree, or gave his consent under some iniquitous pressure, or was involuntarily prevented from fulfilling his contract because of some unlooked-for accident – an action for such an unfulfilled agreement should be brought in the tribal courts, if the parties have not previously been able to reconcile their differences before arbitrators (their neighbors, that is).” The Laws, Book 11 – Plato