“A “eunuch” is “a man who has been castrated (= had the sex organs that produce sperm removed).” Cambridge English Dictionary

The Hebrew word for eunuch is “sars, סָרִיס”  pronounced “saw-reece.” In the Old Testament that word is mentioned 45 times. Eunuch (in Greek eunouchos) is referred to in only two passages in the New Testament—Matthew 19 and Acts 8. The word, also, indicates an “official” who is castrated and put in charge of harems or other duties.

In c. 35 AD—After Philip (the Evangelist—one of the 12 Deacons in Acts 6:1-6) left Samaria, he was commanded by the Lord to go to the 50-mile stretch of road that led south from Jerusalem to Gaza where a Godly, seeking and eager black eunuch from Ethiopia became the first black Gentile whose conversion story is detailed in the New Testament:

“Now an angel of the Lord said to Philip, ‘Go south to the road, the desert road, that goes down from Jerusalem to Gaza. So (Philip) started out, and on his way he met an Ethiopian eunuch, an important official in charge of all the treasury of Candace, queen of the Ethiopians. This man had gone to Jerusalem to worship, and on his way home was sitting in his chariot reading the book of Isaiah the prophet. The Spirit told Philip, ‘Go to that chariot and stay near it.’ Then Philip ran up to the chariot and heard the man reading Isaiah the prophet. ‘Do you understand what you are reading?’ Philip asked. ‘How can I,’ he said, ‘unless someone explains it to me?’ So he invited Philip to come up and sit with him.

The eunuch was reading this passage of Scripture: ‘He was led like a sheep to the slaughter and as a lamb before the shearer is silent, so he did not open his mouth. In his humiliation he was deprived of justice. Who can speak of his descendants? For his life was taken from the earth.’ (Isaiah 53:7,8) The eunuch asked Philip, ‘Tell me, please, who is the prophet talking about, himself or someone else?’ Then Philip began with that very passage of Scripture and told him the good news about Jesus. As they traveled along the road, they came to some water and the eunuch said, ‘Look, here is water. Why shouldn’t I be baptized?’

And he gave orders to stop the chariot. Then both Philip and the eunuch went down into the water and Philip baptized him. When they came up out of the water, the Spirit of the Lord suddenly took Philip away, and the eunuch did not see him again, but went on his way rejoicing.” Acts 8:26-39

That unnamed, everlastingly renowned Ethiopian eunuch was chosen to be the first to bring the Gospel to Africa. Though he was castrated and unable to have children, the promises in Isaiah 56:3-5 aptly apply to him:

“…let not any eunuch complain, ‘I am only a dry tree.’ To the eunuchs who keep my Sabbaths, who choose what pleases me and hold fast to my covenant—to them I will give within my temple and its walls a memorial and a name better than sons and daughters; I will give them an everlasting name that will not be cut off.”

The billions who know this story over the millennia revere and know “that African eunuch” who had his genitals cut off but his “everlasting name will never be cut off.”

Interestingly, it was an Ethiopian eunuch in the Old Testament who rescued the prophet Jeremiah from certain death:

“But Ebed-Melek, an Ethiopian, an ‘official’ in the royal palace (likely, also a eunuch), heard that they had put Jeremiah into the cistern. While the king was sitting in the Benjamin Gate, Ebed-Melek went out of the palace and said to him, “My lord the king, these men have acted wickedly in all they have done to Jeremiah the prophet. They have thrown him into a cistern, where he will starve to death when there is no longer any bread in the city.”

Then the king commanded Ebed-Melek the Ethiopian, “Take thirty men from here with you and lift Jeremiah the prophet out of the cistern before he dies.”

So Ebed-Melek took the men with him and went to a room under the treasury in the palace. He took some old rags and worn-out clothes from there and let them down with ropes to Jeremiah in the cistern. Ebed-Melek the Ethiopian said to Jeremiah, “Put these old rags and worn-out clothes under your arms to pad the ropes.” Jeremiah did so, and they pulled him up with the ropes and lifted him out of the cistern. And Jeremiah remained in the courtyard of the guard.” Jeremiah 38:7-13 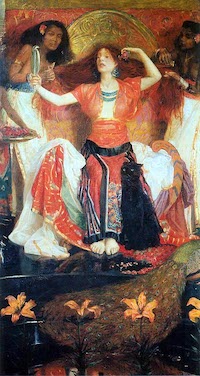 Jezebel in the Bible was a wicked women who married the Jewish King Ahab in the 800’s BC. She had the king introduce to the Jews her pagan god Baal-Melkart and had most of the prophets of Yahweh killed. “Jezebel” has became a by-word for “a wicked woman.” Eunuchs caused her “down-fall.”

“Then Jehu went to Jezreel. When Jezebel heard about it, she put on eye makeup, arranged her hair and looked out of a window. As Jehu entered the gate, she asked, “Have you come in peace, you Zimri, you murderer of your master?”

He looked up at the window and called out, “Who is on my side? Who?” Two or three eunuchs looked down at him. “Throw her down!” Jehu said. So they threw her down, and some of her blood spattered the wall and the horses as they trampled her underfoot.

Especially during the BC’s, most of the cultures in the ancient world had men whom they castrated and appointed as “officials.” The men were castrated so they would have no distractions other than the King’s business. All ancient civilizations have a history of “making” eunuchs—a long-storied history.

“Princes were wont to keep eunuchs in their houses in those countries.” 2 Kings 9:32—Article by Sandra Sweeny Silver