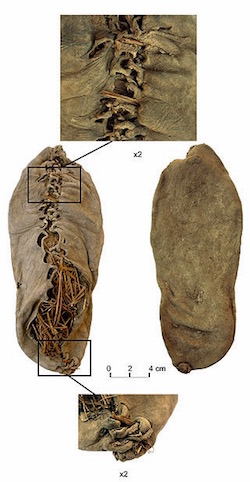 As long as human beings have been walking around on the planet earth, they have had to wear leather shoes to protect their tender feet. The world’s oldest shoe yet found is c. 5,500 years old (left). Called the “Areni-1 shoe,” it was found by an international team of archeologists in an Armenian cave in 2008. Combined with the cool and dry conditions in the cave, the floor of the cave was covered with a thick layer of sheep dung which sealed and preserved the size 7 shoe.

Notice the tanned leather and leather shoe laces. The straw found in the shoe has been dated as old as the shoe. Perhaps it was an extra padding for warmth and rocks.

In 1991 some hikers in the Austrian Alps near the Italian border discovered the Ice Man in a melting glacier. At the age of 5,300 years old, the Ice Man made international headlines because he is the oldest, preserved in tact person ever found. Even though he is several hundred years younger than the “oldest shoe in the world,” his shoes are similar to the oldest shoe. (Scientists have concluded the Ice Man was murdered.) 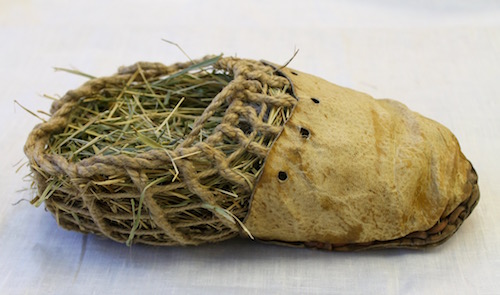 The shoes of the Ice Man (above) were made of deer hide. The soles of the shoes were bear skin and for insulation and warmth the insides of the shoes were stuffed with soft grass. One academic posited that because of the complexity of the shoes, there were probably cobblers around in very ancient times.

If we skip thousands of years forward to the times when the early Christians and the ancient Romans mingled in the market places and battle fields, we see that shoes WERE made by professional cobblers and they have been “refined,” not “re-designed,” because they still are made of leather and still are indispensable to walking around. Or to running around as in the case of a 2,000-year-old Roman shoe (on the left) discovered in 2016 in a ditch at a Roman fort, Vindolanda, near Hexham Northumberland. To the discoverers, the Roman shoe looked very similar to the one worn 2,000 later by David Beckham, the English professional footballer. 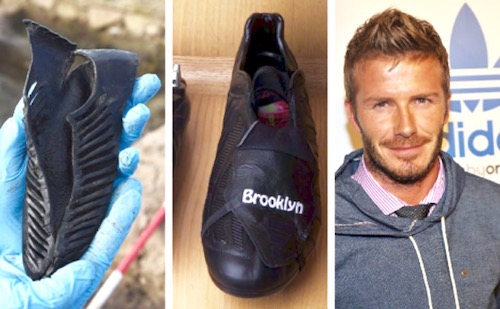 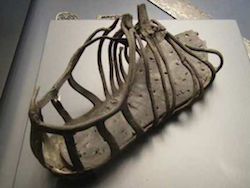 Because ancient Rome was warmer than the “oldest shoes” found in northern Europe, they primarily wore what we wear in the summer, sandals. 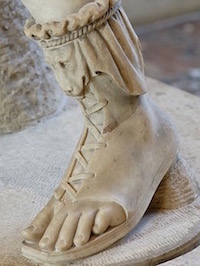 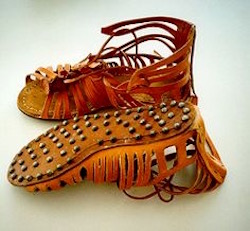 On the left above is a simple sandal worn by the Roman and Christian people in the 200’s AD.

On the right are “fancy” sandals worn by the goddess of the hunt Artemis on a statue in the Louvre, Paris

Soldiers in Rom’e legions wore caligae (left), heavily-soled hobnailed (cleated) boots. They were made of leather. As has been seen, shoes have been made from the skins of animals for…ever. A pitiful death was caused by those cleated shoes during the Battle for Jerusalem in 70 AD when the Romans were besieging the Jews.

The Jews eventually lost Jerusalem, but they fought tooth and nail for every part of it. The Romans had taken possession of the Tower of Antonia in mid-July of 70 but they fell back to reconnoitre. When a valiant Roman auxiliary soldier named Julian saw that his mates were retreating, in a rush of heroism he ran after the Jews and killed many of them. Titus, the Roman general, and his soldiers watched in admiration, but something happened.

Josephus in his Wars 6.1.8 describes the scene: “… as Julian had shoes all full of thick and sharp nails as had every one of the other soldiers (caligae—cleats on the soles of shoes), so when he ran on the (smooth marble) floors of the temple, he slipped and fell down upon his back with a very great noise, which was made by his armor. This made those Jews that were running away to turn back….the Jews got about him in crowds and struck at him with their spears and with their swords on all sides….yet did (Julian), as he lay stab many of them with his sword….he pulled his neck close to his body, till all his other limbs were shattered and nobody came to defend him and then he yielded to his fate….(Titus) was deeply affected…especially since he was killed in the sight of so many (soldiers)…such as could (have helped him) but were too terrified to attempt it.”

Josephus is one of the only writers in antiquity or anytime who describes a death as a result of shoes. The hobnailed/cleated shoes of the military were, also, used by commoners for hiking and walking in rough terrain.

All Roman footwear was flat-soled. High-heels did not come into fashion until the late 1500’s. The Romans essentially always wore a variation of the open sandal, each with its own name. 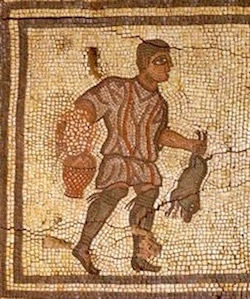 Notice the calceus (a usually hobnailed, thick-soled walking shoe) on the hunter from this mosaic (left) from Villa Romana del Casale in Sicily—300’s AD.

The hunter is wearing a colorful tunic and heavy woolen protection on his legs.

Hunters, however, in ancient Roman times hunted, like some hunt now, for the sport of it and because it was considered a type of “military training.”

Shoes in ancient times as in modern times often told the status of the person. Here (below) one sees the normal Roman man’s high-strapped sandal, the normal woman’s sandal secured, as it is today, with a leather thong between her toes and the somewhat effete closed red shoes that a Roman senator was forced to wear. 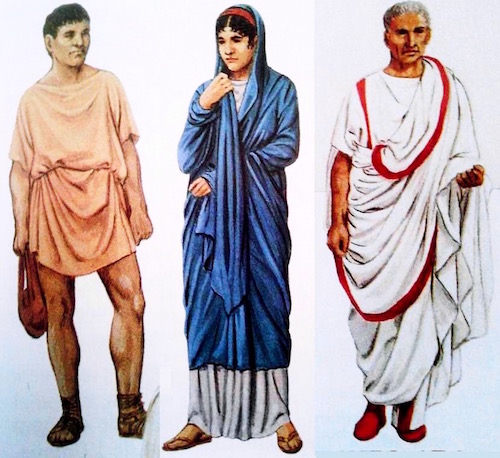 Shoes have always shown status. The more fancy the sandal, the higher the price. The very wealthy in Rome paid many sesterces for their shoes. In our modern world the highest price ever estimated for a pair of shoes was for a replica of the red shoes Judy Garland, as Dorothy, wore in The Wizard of Oz.

Designed by Harry Winston (American jeweler 1896-1978) Jewelry Company these Ruby Slippers were replicated as a tribute to The Wizard of Oz on the eve of the 50th anniversary of the film’s release in 1989. It has 1,350 carats of rubies and 50 carats of diamonds. At $3 million they are the most expensive pair of shoes in the world. Although the “Areni-1” shoe and the shoes the Ice Man wore are the most valuable in the world.—Sandra Sweeny Silver