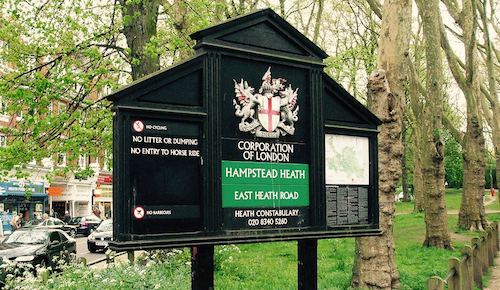 “On Tuesday, as I walked across Hampstead Heath something blue among the stones on the path caught my eye; nearby were other shards of pottery and glass. Some of these are very small. But wouldn’t they look great as a huge painting?” — An English woman from her diary

2,000 years after the Romans made this pottery in Rome, shards of it still turn up as far away from Rome as London, England (c.1,125 miles).

The first Roman general to “invade” England was Julius Caesar in 55-54 BC. His foray into this “foreign/new” territory was not a success. In 52 BC Caesar conquered Gaul (modern-day France, parts of Belgium, western Germany, and northern Italy). So he went back to Rome a NATIONAL HERO with an over-sized ego.

CLICK HERE  for article on the Assassination of Julius caesar

In 43 AD the Roman Emperor Claudius ordered four legions to conquer Britain. It took many battles for Rome to win that little isle but by 100 AD the Roman military had built most of the 8,000 miles of Roman roads in Britain which allowed troops and goods to travel easily across the country.

The discovery of a substantial c. 300’s AD family settlement of Roman people in East Yorkshire, England is believed to be one of the earliest Roman settlements in Britain. Archaeologists found not only remnants of homes but of infants buried near the homes. The many shards of fine pottery, mosaics, and elaborate bowls which have been unearthed suggests trading links with their native home Rome. 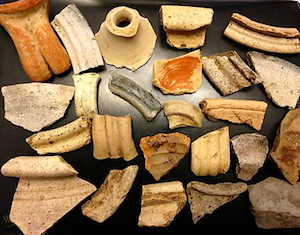 The Romans exported and imported wine and olive oil, the gas/fuel/light of the ancient world. These pottery shards (left) were found in Holland (1028 miles away from Rome) at a frontier Roman military fort in Vechten have yielded over the many years not only pottery shards but a Roman ship. From a visit by an Emperor in the 40’s AD, archeologists uncovered the remains of a wine barrel from Emperor Caligula’s personal vineyard.

Many Roman artifacts have been discovered all over the known world at that time. The Romans travelled by seas a distance of 4,087 miles all the way to India where they had brisk reciprocal trade: the Romans took back from India pepper, sandalwood, ivory, indigo, peacocks, et al. The Indians wanted coral, horses, olive oil, wine, GOLD, et al.

CLICK HERE  for artiicle on Ancient Roman Trade with India

Of course, once the Romans saw Chinese Silk, there was a clamor for MORE, MORE. So. Roman entrepreneurs walked/caravanned the 4,350 miles LONG Silk Road; got the silk Roman, mainly Roman women, craved; walked their loads back to Rome and became very wealthy.— Sandra Sweeny Silver