The first part of the word “Tetris” comes from the Greek word “tetra” meaning the number 4. The goal of the video game Tetris is to drop blocks of four into a playing field to create lines. This video game, created by Russian Alexey Pajitnov in 1984, is the best-selling video of all time with more than 500 million downloads; Game Boy sold 35 million. 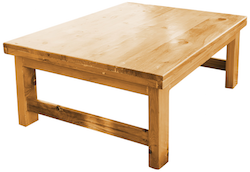 As the 4th of all the numbers, the number tetra in Greek and 4 in English has equality on both sides and symbolizes security and stability like this table with its four “legs.” 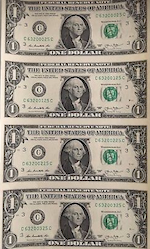 A “drachma” was in ancient Greece a currency. The word probably meant “a handful/ to grasp.” In America and Canada a “dollar” is our currency. “Dollar” comes from the 1550’s word daler or taler which  was a large silver coin in Germany. We have broken up our dollar into 4 pieces—4 quarters equal 1 dollar or 4 dollars are just four dollars.

As trade increased, the ancient Greeks created a drachma called the τετράδραχμον, tetrádrakhmon. In English the word is “tetradrachm.” which combined 4 (tetra) drachmas into 1 (Gr. enas) currency called a tetradrachm, meaning worth 4 drachmas.

“While Jesus was in Bethany in the home of Simon the Leper, a woman came to him with an alabaster jar of very expensive perfume, which she poured on his head as he was reclining at the table.

When the disciples saw this, they were indignant. ‘Why this waste?’ they asked. ‘This perfume could have been sold at a high price and the money given to the poor.’ Aware of this, Jesus said to them, ‘Why are you bothering this woman? She has done a beautiful thing to me. The poor you will always have with you, but you will not always have me.When she poured this perfume on my body, she did it to prepare me for burial. Truly I tell you, wherever this gospel is preached throughout the world, what she has done will also be told, in memory of her.’ Then one of the Twelve—the one called Judas Iscariot—went to the chief priests and asked, ‘What are you willing to give me if I deliver him over to you?’ So they counted out for him thirty pieces of silver.” Matthew 26:6-15

The Greek word used in Matthew 26:15 ἀργύρια, argyria means “silver coins”—“twenty pieces of silver coins.” Some scholars think the coins could have been tetradrachms of Tyre aka Tyrian shekels or Ptolemaic tetradrachms. The silver troy weight of these 30 coins today would be about $150.—$200./$300.00. Was it worth it, Judas?

But that number of silver coins was prophesied by the Old Testament prophet Zachariah 500 years before Jesus of Nazareth was even born.

“And I said unto them, If you think good, give me my hire; and if not, forbear. So they weighed for my hire thirty pieces of silver. And Jehovah said unto me, Cast it unto the potter, the goodly price that I was prized at by them. And I took the thirty pieces of silver, and cast them unto the potter, in the house of Jehovah.” Zechariah 11:12-13 (c. 500 BC)

“So Judas threw the money into the temple and left. The chief priests picked up the coins and said, ’It is against the law to put this into the treasury, since it is blood money.’ So they decided to use the money to buy the potter’s field as a burial place for foreigners. That is why it has been called the Field of Blood to this day. “ Matthew 27:5-8 (c. 60-70 AD)

Emperor Nerva was born in 30 AD and died in 98 AD. He lived and ruled during the times of Jesus and the Early Christians. As Emperor he temporarily ended the persecution of Christians and Jews.

Nerva chose Trajan as his successor. Although Emperor Trajan did not kill Christians en masse like other emperors, he executed Christian leaders including Ignatius, Bishop of Antioch, and Simeon, Bishop of Jerusalem, who was a cousin of Jesus of Nazareth.

The Roman gold aureus below was struck under Nerva’s successor Trajan (53—170 AD). The reverse of this coin struck in c, 115 commemorates both Trajan’s natural father, Marcus Ulpius Traoanis (right) and his adoptive father, the Deified Nerva (left).

Apparently the tetradrachms Judas received were not worth it:

“When Judas, who had betrayed him, saw that Jesus was condemned, he was seized with remorse and returned the thirty pieces of silver to the chief priests and the elders. ‘I have sinned,’ he said, ‘for I have betrayed innocent blood.’ ‘What is that to us?’ they replied. ‘That’s your responsibility.’ So Judas threw the money into the temple and left. Then he went away and hanged himself.” Matthew 27:3-5

This is the second longest word to appear in the Oxford English Dictionary.—Sandra Sweeny Silver