There are many frescoes in the catacombs connecting fish with the celebration of Communion/Eucharist. In the Catacomb of Callixtus in the Cubicles of the Sacraments (c. 300’s AD) there is a unique representation of the imposito manum, “the laying on of hands,” the blessing of the Communion bread. A tripod/altar holds a loaf of bread and a fish. A man is laying his hands on the bread. A female on the right has her hands raised in praise. 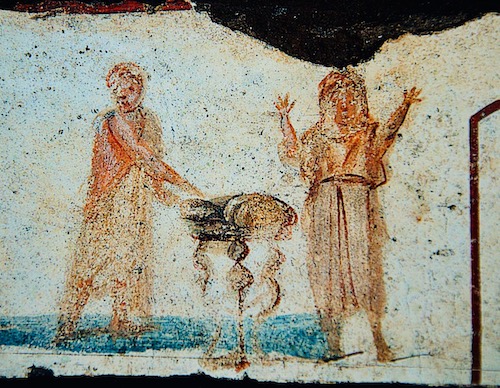 From the same Catacomb there is a depiction of the Eucharist bread on the back of a Large fish. 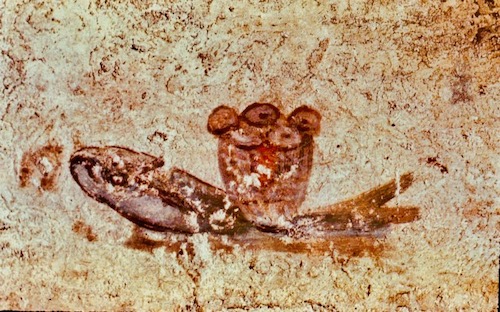 Jesus’ intimate association with fish/meals/the Eucharist is further illustrated in His third post-resurrection appearance to seven disciples by the Sea of Galilee. (John 21:1-14) The seven had been fishing all night but had caught nothing. As morning dawned, Jesus stood on the shore and called out to them, “Friends, haven’t you any fish?” “No,” they answered. He said, “Throw your net on the right side of the boat and you will find some.” Some fishermen on the Lake used a dragnet hundreds of feet long, but Simon and the disciples were probably using a 55 square foot circular fishing net. They obeyed Jesus and caught 153 large fish. John immediately said to Peter, “It is the Lord!” Peter impetuously jumped into the water, swimming to Jesus as the other disciples towed the net full of fish to the shore. When they all arrived:

“…they saw a fire of burning coals there with fish on it and some bread….Jesus said to them, ‘Come and have breakfast.’ None of the disciples dared ask him, ‘Who are you?’ They knew it was the Lord. Jesus came, took the bread and gave it to them and did the same with the fish.”

“While they were eating, Jesus took bread, gave thanks and broke it, and gave it to his disciples saying, ‘Take it; this is my body.’ Then he took the cup, gave thanks and offered it to them, and they all drank from it. ‘This is my blood of the covenant which is poured out for many,’ he said to them.” Mark 14:22-24

Rather than emphasize Jesus’ sacrifice on the cross as the Passover meal in the Upper Room did, this seaside breakfast obviously included the command to “go fish,” to evangelize. It included a miracle of fish, the fishermen, the Great Fisherman Himself, fish and bread.

At Jesus’ first post-resurrection appearance to His Apostles, He showed them His hands and feet and tried to allay their astonishment and to demonstrate He was a body and not an apparition by asking, “‘Do you have anything here to eat?’ They gave him a piece of broiled fish, and he took it and ate it in their presence.”(Luke 24:40-42) The eating of the fish convinced the Apostles that Jesus was alive again. Eating fish, meals of fish, miracles of fish. It is not totally enigmatic that the early Christians may have had fish on the Communion table and portrayed Jesus as the Ichthus, the Fish, the Christos. Even in Greek, the lingua franca of their world, His acrostic name was Fish.

CLICK HERE for article on the meaning of ICTHUS

One of Jesus’ miracles most represented in the catacombs is the Multiplication of the Loaves and Fishes. This miracle perhaps illuminates more profoundly the prominence of the fish in early Communion celebrations:

“…the crowds followed him on foot from the towns. When Jesus landed and saw a large crowd, he had compassion on them and healed their sick. As evening approached, the disciples came to him and said, ‘This is a remote place, and it’s already getting late. Send the crowds away, so they can go to the villages and buy themselves some food.’ Jesus replied, ‘They do not need to go away. You give them something to eat.’ ‘We have here only five loaves of bread and two small fish,’ they answered. ‘Bring them to me,’ he said. And he directed the people to sit down on the grass. Taking the five loaves and the two fish and looking up to heaven, he gave thanks and broke the loaves (as He had done in the Upper Room). Then he gave them to the disciples, and the disciples gave them to the people. They all ate and were satisfied, and the disciples picked up twelve basketfuls of broken pieces that were left over. The number of those who ate was about five thousand men, besides women and children.” Matthew 14:13-21

It was supernatural for Jesus to heal physical infirmities. But there were, are and will be miraculous healers in the world. It was, however, beyond human imagination or comprehension to cause two brined, dried fish and five loaves of small, flat, unleavened barley bread to increase exponentially into enough food to feed five thousand men, not including women and children. It was considered important enough to be the only miracle of Jesus mentioned in all four Gospels. (Matthew 14:31-44; Mark 6:31-44; Luke 9:10-17; John 6:1-15). Two of the Gospel writers record a second miracle of multiplication that fed four thousand people from just seven loaves of bread and “a few small fish.” (Matthew 15:29-39; Mark 8:1-10) These two miracles involving bread and fish are often pictured in catacomb art.

The Fractio Panis (“Breaking of Bread”) fresco in the Catacomb of Priscilla on the Via Salaria is liturgically and theologically one of the most famous of catacomb paintings.

Seven people are reclined/seated at a table where there is a cup of red wine and two large plates. One plate contains five loaves of bread, the other two fish, replicating the numbers in the multiplication miracle from the Gospels.  A man (presbyter/priest?) at the end of the table has a small loaf in his hands. His arms are stretched out in front of him to show he is breaking the bread as Jesus broke the bread at the Last Supper and before He fed the five thousand and the four thousand. Near the man is a two-handled cup. On one side of the painting are four wicker baskets overflowing with bread. On the other side there are three baskets filled with bread representing the “seven basketfuls of broken pieces that were left over” (Mt. 15:37) after Jesus had fed the four thousand.

The Fractio Panis fresco, early 100’s, is the clearest example we have in catacomb art of the ritual of the Eucharist in the first one hundred years of the Gentile Church in Rome. In the New Testament book of Acts (c. 63-70) there are references to Christians gathering to “break bread:”

“They devoted themselves to the apostles’ teaching and to the fellowship, to the breaking of bread and to prayer.” 2:42

“They broke bread in their homes and ate together with glad and sincere hearts.” 2:46

The Fractio Panis fresco illuminates more clearly how the early catacomb Christians celebrated the Lord’s Supper. We see the Communion bread is broken and blessed by the laying on of hands. A cup of wine is present as are two fish. All three elements are on the table. Two millennia later Christian Communion is exclusively celebrated (Latin celebrare meaning “to assemble to honor”) as reflecting the Last Supper when Jesus pronounced the Bread His Body and the Wine His Blood. According to their iconography, the catacomb Christians gave the Eucharist a much broader context by including fish in the ritual.

There is a very early description of the correct way to celebrate the Eucharist in the Didache, a work cited by the Christian writers Clement of Alexandria (c. 150-215), Eusebius of Caesarea (263-339) and Athanasius (c. 293-373). Though known through those authors, the Didache in manuscript form had been lost for over 1,400 years until it was re-discovered in 1873 by a Greek Orthodox Metropolitan, Philotheos Bryennios, in the Jerusalem Monastery of the Most Holy Sepulcher in Istanbul. Bryennios published the Didache in 1883. It was immediately recognized as one of the most important manuscripts (Latin manu meaning “by hand” and scriptus meaning “written”) of the Early Church because it was obviously written before church hierarchy was firmly in place and was very close to the Jewish Apostolic Age. 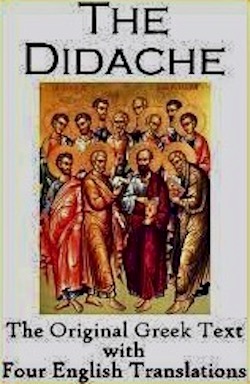 “The teaching of the Lord through the twelve Apostles to the Gentiles ( meaning ‘nations’).” According to the Teaching, this is how the Eucharist should be celebrated:

And with respect to the fragment of bread: ‘We give you thanks, our Father, for the life and knowledge that you made known to us through Jesus your child. To you be the glory forever.

As this fragment of bread was scattered upon the mountains and was gathered to become one, so may your church be gathered together from the ends of the earth into your kingdom. For the glory and the power are yours through Jesus Christ forever.’

But let no one eat or drink from your thanksgiving meal unless they have been baptized in the name of the Lord. For also the Lord has said about this, ‘Do not give what is holy to the dogs.’

And when you have had enough to eat, you shall give thanks as follows:

‘We give you thanks, holy Father, for your holy name which you have made reside in our hearts, and for the knowledge, faith and immortality that you made known to us through Jesus your child. To you be the glory forever.

You, O Master Almighty, created all things for the sake of your name, and gave both food and drink to humans for their refreshment, that they might give you thanks. And you graciously provided us with spiritual food and drink and eternal life through your child.

Above all we thank you because you are powerful. To you be the glory forever.

Remember your church, O Lord; save it from all evil, and perfect it in your love. And gather it from the four winds into your kingdom, which you prepared for it. For yours is the power and the glory forever.

May grace come and this world pass away. Hosanna to the God of David. If anyone is holy, let him come; if any one is not, let him repent. Maranatha! (“Come, Lord!”) Amen. (”So be it.”)

But permit the prophets to give thanks (or: ‘hold the eucharist’) as often as they wish.’” Didache 9. 10

Hmmm. Don’t see any fish swimming in those words. BUT see a lot of fish, ICTHUS, on the walls in the catacombs.—Sandra Sweeny Silver