“I see clearly now that God is not one to show partiality, but in every nation the man who fears Him and does what is right is welcome to Him.” The Apostle Peter tells the Gentile Roman centurion Cornelius in Acts 10: 34, 35

In China the centuries from about 600 AD to 1300 AD is often called the Golden Age of China. In 635 AD a Christian Nestorian missionary named Alopen arrived in China and was so well-received by the ruler Taizong that Christianity bloomed in China for hundreds of years. Taizong arranged for the Bible to be translated into their language and disseminated all over China. Many Christian churches were built and Alopen was appointed Bishop over them all. The Tang dynasty and Christianity faded c. 900 AD, but the Christian ideas and innovations had helped birth a Golden Age.

With the discovery of the Nestorian Stele in the 1620’s, the missionary Alopen and the spread of Christianity in ancient China became known again. 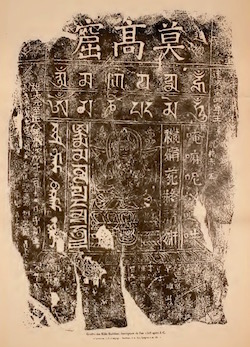 n the late 1800’s/early1900’s Western explorers along the old Silk Road noticed ancient Chinese artifacts like the Stele of Sulaiman at the Mogao Caves near an oasis called Dunhuang.

The Stele of Sulaiman (left) was erected in 1348 to commemorate the donations of Sulaiman, Prince of Xining. A Taoist man named Wang Yuanlu had been “tending” the site for some time. While clearing away the sand which had accumulated for centuries over the caves, he noticed a walled up area. Behind the wall, he found on June 25, 1900 a small cave stuffed to the ceiling with textiles, paintings, artifacts and manuscripts—including the Jesus Sutras.

The manuscripts date from between the 4th century AD and 635 AD, the year of the missionary Alopen’s arrival in China, to c. 1000 AD when the cave at Mogao was sealed for whatever reasons. Some speculate they were sealed because of the persecution of Christians and Buddhists c. 850. According to an unnamed source, more than 3,000 monks of the “Luminous Religion” (Christianity) were ordered to return to their secular lives. Ever since that time some who specialize in ancient Chinese Christianity have been looking for Alopen’s Scriptures which were translated into Chinese. 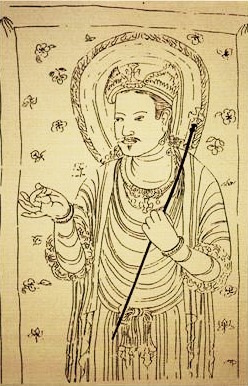 The Sanskrit word Sūtra (Sanskrit: सूत्र, Pali: sūtta, Ardha Magadhi: sūya) means “string, thread”. The root of the word is siv, that which sews and holds things together. The word is related to sūci (Sanskrit: सूचि) meaning “needle, list”,[13] and sūnā (Sanskrit: सूना) meaning “woven”. The word Sutra normally refers to a group of aphorisms/teachings in Hindu or Buddha religion/philosophy.

The Jesus Sutras found in Cave 17 are astoundingly Biblical but some Buddhist and Taoist thought and phrases are found in the Sutras.

To the left is a restoration of a T’ang dynasty picture of Jesus Christ found in Cave 17 at Magoa Caves, Tunhwang. The original work dated back to the 800’s.

5. Taking Refuge in the Trinity
6. Invocation of the Dharma Kings and Sacred Sutras, or Let Us Praise
7. The Sutra of Returning to Your Original Nature
8. The Christian Liturgy in Praise of the Three Sacred Powers, or The Supreme

The Jesus Sutras teach that because people’s innate good nature had become confused and obscured God had to come to Earth as Ye Su (Jesus).

“Therefore, my Lord Ye Su (Jesus/Yeshua) the One emanating in three subtle bodies, hid his true power, became a human, and came on behalf of the Lord of Heaven to preach the good teachings.” (Sutra 2:17).

“There was no other way to free us from sins but for Him to enter this world. So He came and suffered a life of rejection and pain before returning. To know this is to know who He was, to know that the One Sacred Spirit became incarnate in the Holy Sacred Spirit. Knowing this, you should do as is commanded: follow these teachings and worship the One Sacred Spirit. A benevolent act done in the knowledge of this suffering is the only truly benevolent act, acceptable only by these teachings and none other.” (Sutra of Cause, Effect, and Salvation 5:17-21)

This Sutra contains the doctrine of original sin by Adam and reflects Jesus as taking on Himself the sins of man.

“As a lamb goes silently to be slaughtered so he was silent, not proclaiming what he had done, for he had to bear in his body the punishment of the Law. Out of love he suffered so that what Adam had caused should be changed by this.” Isaiah 53:7; I Peter 2:24; I Corinthians 15:22

“While his Five Attributes passed away, he did not die but was released again after his death. Thus is it possible for even those who fail to live after death.” (Sutra 4:20-21)

“Those who believe will be raised after death from the Yellow Springs (Underworld), every one of them.” (Sutra 6:14)

“Through the holy wonders of the Messiah all can escape becoming ghosts. All of us are saved by his works. You don’t need strength to receive him, but he will not leave you weak and vulnerable, without qi (chi).” (Sutra 4:22-24) Qi pronounced “Chi” is from Chinese qì meaning “air, breath.”

“You may have been taught that people cannot save themselves. This is why the Heavenly Honored One sends the spirit force to all places to save everyone. It goes to all that live and teaches the truth. This is different from what the various deities and spirits do.” (Sutra 7:36-39)

The following are Jesus Sutra sayings from the teachings of the four Gospels:

“Always tell the truth. Do not give pearls to swine; they will trample and destroy them. You will only be blamed by them for your actions and incur their anger. Why don’t you realize this yourself.” Matthew 7:6

“Look at the birds in the air. They don’t plant or harvest, they have no barns or cellars. In the wilderness the One Spirit provided for the people and will also provide for you. You are more important than the birds and should not worry.” Matthew 6:26, 27

Here is how the Jesus Sutras relate the story of Jesus:

“The Lord of Heaven sent the Cool Wind to a girl named Mo Yen. It entered her womb and at the moment she conceived. The Lord of Heaven did this to show that conception could take place without a husband. He knew there was no man near her and that people who saw it would say, ‘How great is the power of the Lord of Heaven’… Mo Yen became pregnant and gave birth to a son named Jesus, whose father is the Cool Wind.” (Sutra of Jesus Christ 5:1-4) Luke 1:26-38. The Holy spirit in Greek is Άγιο πνεύμα meaning “Holy Wind.”

“… When Jesus Messiah was born, the world saw clear signs in heaven and earth. A new star that could be seen everywhere appeared in heaven above. The star was as big as a cart wheel and shown brightly. At about that time, the One was born in the country of Ephrath in the city of Jerusalem. He was born the Messiah and after five years he began to preach the dharma.” Matthew 2:1,2 is Star in the East; Ephrath is “Ephratah (Bethlehem) in Micah 5:2; Dharma means “firm” like a law.

“… From the time the Messiah was 12 until he was 32 years old, he sought out people with bad karma and directed them to turn around and create good karma by following a wholesome path. After the Messiah had gathered 12 disciples, he concerned himself with the suffering of others…

Those who had died were made to live. The blind were made to see. The deformed were healed and the sick were cured.” Karma in Hinduism and Buddhism “is the sum of a person’s actions in this and previous states of existence, viewed as deciding their fate in future existences.” 12 Disciples Matthew 10:1-4; Jesus raised the dead Luke 7:11-15 & John 11:1-4; Jesus healed all the sick Matthew 12:15

“… For the sake of all living beings and to show us that a human life is as frail as a candle flame, the Messiah gave his body to these people of unwholesome karma. For the sake of the living in this world, he gave up his life.” I John 3:16

“… After the Messiah had accepted death, his enemies seized the Messiah and took him to a secluded spot, washed his hair and climbed to “the place of skulls,” which was called golgotha. They bound him to a pole and placed two highway robbers to the right and left of him. They bound the Messiah to the pole at the time of the fifth watch of the sixth day of fasting. They bound him at dawn and when the sun set in the west the sky became black in all four directions, the earth quaked and the hills trembled. Tombs all over the world opened and the dead came to life. What person can see such a thing and not have faith in the teaching of the scriptures? To give one’s life like the Messiah is a mark of great faith.” John 19:17; Matthew 27:51-53; Matthew 27:54

Today there are millions of Chinese Christians. In the last decades in China, there has been an exponential rise in believers in Christ. Some estimates say China may have the world’s largest population of Christians by 2030.

Below is a Christian worship service in a contemporary Chinese Home Church. Home Churches are forbidden by the atheistic Chinese Communist government and many “pastors” of Home Churches have been imprisoned or killed. 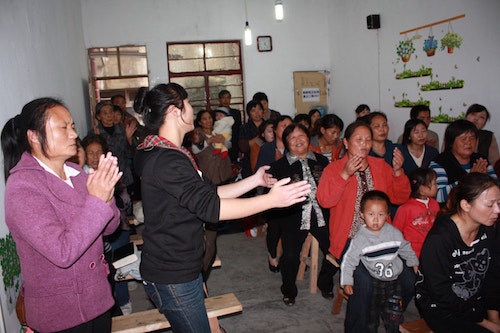 “The next day an evil spirit from God came forcefully on Saul. He was prophesying in his house, while David was playing the lyre, as he usually did. Saul had a spear in his hand and he hurled it, saying to himself, ‘l’I pin David to the wall.’ But David eluded him twice. Saul was afraid of David, because the Lord was with David but had departed from Saul.” I Samuel 18:10-12— Article by Sandra Sweeny Silver