“As (Jesus) went along, he saw a man blind from birth. His disciples asked him, ‘Rabbi, who sinned, this man or his parents, that he was born blind?’ ‘Neither this man nor his parents sinned,’ said Jesus, ‘but this happened so that the works of God might be displayed in him. As long as it is day, we must do the works of him who sent me. Night is coming, when no one can work. While I am in the world, I am the light of the world.’ After saying this, he spit on the ground, made some mud with the saliva, and put it on the man’s eyes. ‘Go,’ he told him, ‘wash in the Pool of Siloam’ (this word means “Sent”). So the man went and washed, and came home seeing.” John 9:1-7

In His miracles, Jesus usually just touched a person with His hands. For this man who was born blind, Jesus uses His spit and mud applied to the man’s eyes in order to restore the man’s sight. It is interesting that the man has been in darkness from birth. He has never seen the light of day. Jesus “saw” the man’s darkness and said, “As long as it is day (light), we must do the works of Him Who sent me. Night (darkness) is coming…While I am in the world, I am the light of the world….man came home seeing (in the light).” The contrasts in this narrative bounce between darkness and light and this miracle of darkness to light is one of the times Jesus proclaims Himself “the light of the world.”(John 8:12)

But what about the spit and the mud combination Jesus put on the man’s eyes? 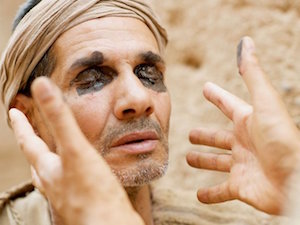 The ancient Chinese believed that saliva and blood were “brothers.” One could extrapolate from this: man was created from the earth under his feet and then he fell into sin and Jesus’ blood saves us from our sins. The people at that time believed “sin” was the reason he was born blind. Interesting thesis, but— just interesting. In imitation of this miracle, some Irish rural people still use a combination of spittle and clay for eye problems.

Jesus uses His saliva two other times in the New Testament. In Mark 7:31-35: “Then Jesus left the vicinity of Tyre and went through Sidon, down to the Sea of Galilee and into the region of the Decapolis.

There some people brought to him a man who was deaf and could hardly talk, and they begged Jesus to place his hand on him. After he took him aside, away from the crowd, Jesus put his fingers into the man’s ears. Then he spit and touched the man’s tongue. He looked up to heaven and with a deep sigh said to him, ‘Ephphatha!’ (which means “Be opened!”). At this, the man’s ears were opened, his tongue was loosened and he began to speak plainly. Jesus commanded them not to tell anyone. But the more he did so, the more they kept talking about it. People were overwhelmed with amazement. ‘He has done everything well,’ they said. ‘He even makes the deaf hear and the mute speak.’”

In this miracle the man is totally deaf either before or after his birth and thus he could barely talk. One has to hear in order to speak. Jesus puts His fingers into the man’s ears so he could hear. Then He spit into His hand and touched the man’s tongue with His spit.The deaf and mute man could hear and speak. The Man called the Logos (the Word in Greek)) in John 1:1 brought words into that man’s life. And the man could hear The Word. 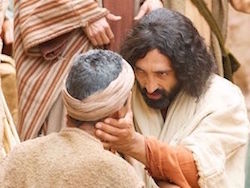 “They came to Bethsaida, and some people brought a blind man and begged Jesus to touch him. He took the blind man by the hand and led him outside the village. When he had spit on the man’s eyes and put his hands on him, Jesus asked, ‘Do you see anything?’ He looked up and said, ‘I see people; they look like trees walking around.’ Once more Jesus put his hands on the man’s eyes. Then his eyes were opened, his sight was restored, and he saw everything clearly.”

The blind man’s friends asked Jesus “to touch” the blind one. So “He took the blind man by the hand and lead him outside the village.” He touched him. When they were alone, He spit into the man’s eyes and touched him again. The blindman saw but he did not see clearly. So Jesus “touched” him again, “put his hands on the man’s eyes. Then his eyes were opened, his sight was restored and he saw everything clearly.””

Some see this miracle as in two parts. The first part Jesus’ spit does restore some sight. But when he again touches the man’s eyes, he sees completely. “The “Touch of the Master’s Hand.”

In all these miracles saliva is a form of the Greek verb ptuó, “to spit.” (Maybe that is why we say “Ptoo” when someone spits?) It must be said that in Jesus’ time, He is the only one in his small world Who KNEW the healing value of Saliva. The Old Testament saw spittle as an insult, a bad thing. 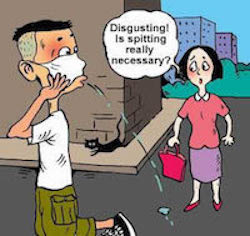 Job 17:6 “God has made me a byword to everyone, a man in whose face people spit.”

Job 30:10 “They detest me and keep their distance; they do not hesitate to spit in my face.”

Isaiah 50:6
“I offered my back to those who beat me, my cheeks to those who pulled out my beard; I did not hide my face from mocking and spitting.”

Later the Talmud recognized saliva as a healer.

The Roman naturalist and writer Pliny the Elder (23-79 AD) who was contemporary with Jesus has a whole chapter in his Natural History on the many, often ridiculous and fanciful, diseases/injuries that can be cured by “fasting saliva” (meaning saliva in the morning before breakfast). He mentions in 28.7: “lichens and leprous spots may be remedied by early morning application of fasting spittle….eyes may be cured by early morning fasting spittle.” So the student of Nature Pliny did at least know the healing properties of saliva.

Thousand of years later in our day microbiologists have turned their attention and experiments to the half gallon of our saliva generated each day. (We don’t swallow our saliva when we are asleep—hence “fasting saliva.”)

They have found histatins in our spit. Histatins, a protein, are a group of histidine-rich cationic peptides which are antibacterial and antifungal and are found only in humans and primates. They, also, found neutrophils with their abundance of white blood cells which are the micro cells that protect our body against infectious diseases and foreign invaders. And they found laminim in our saliva! 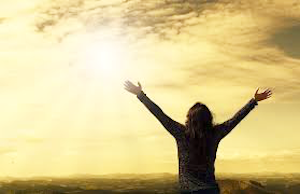 If one believes that Jesus was the Son of God, it is not enigmatic He knew the healing powers of saliva two thousand years ago.

“I will praise Thee, for I am fearfully and wonderfully made; marvelous are Thy works, and that my soul knoweth right well.” King David Psalm 139:14 KJV—Article by Sandra Sweeny Silver