The Zodiac Man (Homo signorum) is an early 16th century reproduction of a drawing from the 1480’s. This painting is in the King’s College in London Science Photo Library and is from a compilation of knowledge from the time, called Margarita philosophica,  prepared as a textbook for young students of college age. Written by the German author George Reisch (c. 1467-1525) and published in Freiburg in 1503, the Zodiac Man was in the medical section of the book to illustrate when it was most propitious according to the moon and stars to do an operation or procedure.

The idea behind the Zodiac Man goes back thousands of years to Babylonia where man was considered to be a body that corresponded to the heavenly bodies. Over the millennia some have always incorporated the entire universe into their bodies and psyches. According to the Zodiac Man, if a procedure on your reproductive system, sexual organs, bowels or excretory system was required, the days of Scorpio (October 23-November 21) were especially benevolent for those operations. If nowadays one should require a hip or knee replacement, it would be best to have those operations during the days of Capricorn (December 22-January 19) according to the theory. 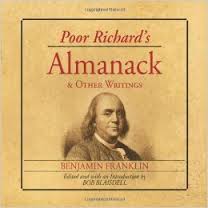 The influence of astrology was still great in the Middle Ages but began to wane shortly thereafter. Ben Franklin in the late 1700’s, however, used the Zodiac Man illustration in several of his Poor Richard Almanack editions. Note the genitals of our Zodiac Man here have been scribbled over by an antique pen so as not offend.—Sandra Sweeny Silver

CLICK HERE for article on Astrology and Early Church Fathers