“Excellent well; you are a fishmonger.” William Shakespeare, said by Hamlet to Polonius. (Hamlet Act 2, Scene 2) At that time in the 16th century AD “fishmonger” could, also, mean “fleshmonger” or “pimp,” as in this Shakespearean allusion.

“Monger” comes from the Latin word mango meaning “dealer, trader, slave-trader.” It is related to the Latin mangonium meaning “displaying of wares” and the Greek word manganon which means “a means of charming or bewitching.” So a fishmonger, one who sold fish, has always had a bad smell about his name.

There is a strong distinction between a fishmonger and a fisherman. The former sells fish and the latter catches fish to sell. Four of Jesus’ closest friends, the Apostles Peter, Andrew, James and John were fishermen. They had boats and caught fish with nets in the Sea of Galilee. The four were partners in a fishing business in Capernaum, located on the northern shore of the Sea of Galilee, and would have exported fresh as well as dried fish to Damascus, Tyre, Jerusalem and the villages around the Galilee.

Another of Jesus’ Apostles, Matthew who was a tax collector, could have been in charge of collecting the Roman tax for licenses to fish and then for the additional tax on the fishermen’s daily catch. Until he became an Apostle, the four businessmen (Peter, Andrew, James and John) would, no doubt, have had little regard for the tax collector Levi (Hebrew  “joined”), whose name was later changed to the Greek Matthew (“gift of Jahweh”).

In Jesus’ day, fishing was an important part of the Galilean economy and the tilapia, sardines and carp from this large fresh water lake were prized all over the region. Being a fisherman was then and is now a crucial and an honorable profession.

But fishmongers, sellers of fish, have ALWAYS had a bad reputation. Amphi (4th century BC Athenian comic poet), in The Wandering Juggler said: “It is easier, by a million degrees, to get access to the General Staff, and demand a conference and receive an answer to one’s questions than it is to approach the damned fishmongers in the market….Whenever a purchaser picks up one of their wares on display and addresses to them a question, the dealer, never stopping to pronounce his words entire, but clipping a syllable here and there, answers ‘ ‘Twda cost y’ eight pence.’ ‘And this sept-fish?’ ‘Steen-pence.’ Such is the jargon the purchaser must hear.”

There have always been women, also, who “hawked” fish. The Egyptian woman in Cairo (below) promotes feseekh, the potentially deadly, fermented, smelly and salty mullet fish eaten for thousands of years in Egypt. 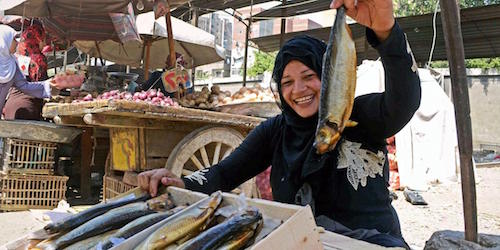 The legendary Molly Malone, famous for the song “Molly Malone” which has become the unofficial song of Ireland, supposedly was a fishmonger in the 17th century who sold fish in the daytime and was a prostitute at night. She had a statue on Grafton Street in Dublin commemorating the new millennium, but her statue is now on Suffolk Street (below). Her statue has been groped by Dubliners and tourists so much that the bronze has begun to wear off on her bosom. Maybe she would have liked that? 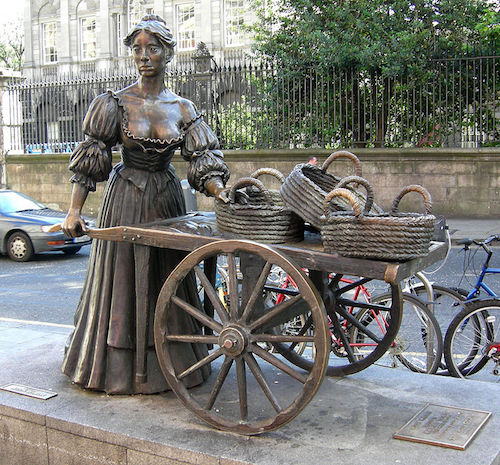 Fishmongers have forever been accused of charging too much for their dead, often stale, fish. Alexis (c. 375-275 BC) the Greek comic poet in The Meeting at Pyale laments the exaggerated prices fishmongers get for their wares : “I vow to Athena, but I am lost in wonder at the fishmongers. How in the world is it that they are not all rich, since they receive royal tributes? Only tributes? Don’t they sit at their ease in our cities and take tithes of our property, and rob us of our entire estates every day?”

Sometimes and in some times fishmongers were prized. The Worshipful Company of Fishmongers in London were recognized as an organized community when Edward I granted them their first charter in c. 1272. They are to this day a prized organization. Was a pious idea to include the word “Worshipful” in their company.

But overall, throughout history, fishmongers have had a bad name. Antiphanes (444-385 BC) the Athenian comic playwright in his Knave-Hater describes the most depraved, conniving people of his day: “….Yes, excepting the mendicant priests, by Zeus; for as a rule that is the foulest breed of all. Unless, by Zeus, one should want to call fishmongers the foulest. But only after the money-lenders. There is no more pestiferous than they.”

“The church of St. Michael’s, Crooked Lane, standing a short distance from Billingsgate, is enriched with the tombs of many fishmongers of renown; and as every profession has its galaxy of glory and its constellation of great men, I presume the monument of a mighty fishmonger of the olden time is regarded with as much reverence by succeeding generations of the craft, as poets feel on contemplating the tomb of Virgil or soldiers the monument of a Marlborough or Turenne.” Washington Irving c. 1819. The Sketchbook of Geoffrey Crayon