An article appeared on a science news website, livescience.com, in mid-January 2015—”Mummy Mask May Reveal Oldest Known Gospel.” If the information that the fragment from Mark’s Gospel dates from c. 80-90 AD is correct, it would be the oldest piece of papyrus containing a part of the New Testament yet discovered. 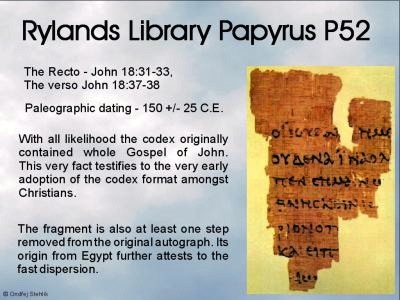 Until the recent discovery of the Mark fragment, the oldest known fragment of a New Testament book was the Rylands Library Papyrus P52 containing on both sides parts of 7 lines in Greek from the Gospel of John (18:31-33 and 18:37-38). That fragment of a codex (ancient book made of pages of papyrus, parchment or velum) came from Egypt in c. 1920 and has had many decades of peer review and study in order to confirm its date of c. 120-125 AD, only about 30 years after John wrote his Gospel.

The fragment from Mark, if the c. 80-90 AD date is eventually confirmed, would antedate Papyrus 52 and would mean it was written or copied before Mark’s martyrdom in Egypt in c. 68. The Mark text and other texts in the mummy mask were scheduled to be published in 2015. The date has now been given as 2017. Philologists and epigraphists are anxiously waiting to examine this purportedly important ancient fragment.

How did a fragment of Mark’s Gospel end up in a mummy mask? Most have seen the 24 lbs. of solid gold mummy mask of the young King Tutankhamen (ruled Egypt c. 1332-1333 BC). His tomb in the Valley of the Kings was discovered by Howard Carter in 1922. It made international news and was immediately identified as one of the greatest archeological finds ever. Below is a 4 minute video account, shot in the 1920’s, of Carter’s discovery of King Tut’s tomb.

In October, 2015 while King Tut’s mask in the Egyptian Museum in Cairo was being cleaned, they broke off his beard. In an attempt to reattach it, the epoxy leaked into the face of the mask and dried. In an attempt to remove the dried epoxy, they scratched the mask. Not good.

There are hundreds of funerary masks of ordinary people and they are not museum-quality. Most ancient Egyptians could not afford expensive gold masks like King Tut could. To make a mummy mask for an ordinary person like the mask of the mummy that contained the Mark fragment, strips of linen and pieces of discarded papyrus mixed with plaster were used to form paper-mache masks. They were then molded to the heads of the dead and facsimiles of features were painted on them. Some of the mummy masks used “cartonnage” to mold the features. That type of material was made of linen and papyrus mixed with lapis lazuli, glass, plaster and other pigments. Often, as in the case of the Fayum mummies, hot wax was poured over the masks and were then painted. These masks are called “encaustic painting masks.”

[CLICK for article on examples of encaustic painting technique.]

Look into the eyes of this humble woman. Imagine her age. Imagine her life. Imagine how she died. Imagine the person who molded this mask to her face. Imagine him picking up discarded scraps of papyrus and linen and mixing them with plaster. Imagine he had no idea that one of those little scraps of papyrus would 2,000 years later be the subject of international news. Look at that woman’s face with the wrinkled plaster and the sorrowful eyes. Imagine REAL gold would be hidden inside there. See it? I do.—Sandra Sweeny Silver