Of all the symbols commonly used by early Christians, the fish was the most mystic. One recalls Africanus’ translation of The Narrative of Events that supposedly happened in Persia at the time of Christ’s birth when the statues cried out: “(Mary) bears in her womb, as in the deep, a vessel of myriad talents’ burden….This stream of water sends forth the perennial stream of spirit, a stream containing a single fish, taken with the hook of Divinity, and sustaining the whole world with its flesh as though it were in the sea.” If these golden plates go back to the Magi and the birth of Jesus, this is the earliest allusion to Christ as Fish.

CLICK HERE to read Africanus’ Narrative on the Magi

Tertullian (c. 160-220) in his treatise on baptism, De Baptismo 1, reasons that as water sustains fish, “we, little fishes, after the image of our ichthus, Jesus Christ, are born in the water (of baptism) nor are we safe but by remaining in it.”

By calling Christians “little fishes,” Tertullian evokes Mark 1:16-18 where Jesus, the Big Fisherman, called fishermen to become fishers of men: “As Jesus walked beside the Sea of Galilee, he saw Simon and his brother Andrew casting a net into the lake, for they were fishermen. ‘Come, follow me,’ Jesus said, ‘and I will make you fishers of men.’ At once they left their nets and followed him.” 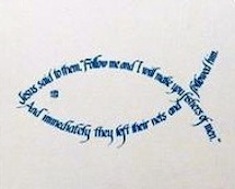 Tertullian calls Jesus Christ “our ichthus.” Ichthus is a Greek word meaning “fish.” Clement of Alexandria (c. 150-215) who was the teacher of Origen recommends his readers have their personal seals engraved with either a dove or a fish. Pedagogus 3.11 Since Clement does not explain why he suggests a dove or a fish, it can be inferred that the symbols were common and needed no explanation.

Most of these early 2nd century literary references to Jesus as Fish probably postdate the Christian practice of referring to Christ as Ichthus. The holy acrostic below was the original credo, the fundamental article of faith for the earliest Christians.

In the first three centuries of persecution, Christians used to identify each other by casually drawing the Ichthus, the fish in the dirt or sand. If the other person responded, it was good. If they did not, it was just an idle doodle.

“Ichthus” was perhaps used as an abecedary, as a mnemonic tool for new Christian believers. Abecedaries were, and still are, rhymes or lists used to teach the alphabet to young children as in the English Alphabet Song.

Groups of individual letters of the Greek and Latin “alphabet,” itself a word derived from the first two letters of the Greek alphabet (alpha and beta), have been found on ancient gravestones and in the catacombs. The letters obviously meant something then, but defy translation now. If the meaning of the grouping of the letters “I-CH-TH-U-S” had not been preserved through the ages, it would, also, be mystifying.

Augustine (354-430) elaborates: “Of these five Greek words (Iesous, Christos, Theou, Uios, Soter), should you group together the letters, you would form the word ichthus, fish, the mystical name of Jesus the Christ who, in the abyss of our mortality, as though in the depths of the sea, was able to remain alive, that is, free from sin.” The City of God 23

Symbols, allegories, acrostics, similes and metaphors are forms of poetic thought and must be caught rather than taught. One of the things Augustine was saying is that Jesus, the mystical Big Fish, was in the waters, in the sea of human mortality, yet He did not succumb to sin as we do but remained alive, remained free from sin, remained clean. (The fish has the added advantage of its association with baptismal water as well as its Greek acrostic resonance.) The early Christians caught it. And they comprehended that if Christians were fishers of men and, by induction, fishes, then Jesus who called them to be little fishes and fishermen would Himself be the Big Fish, the Ichthus. And, amazingly, this simple symbol, composed of two slanted lines, is meaningful enough and powerful enough that it is still used by Christians two thousand years later.—Sandra Sweeny Silver