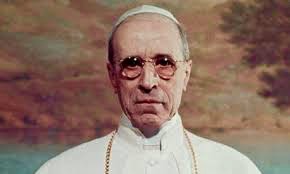 St. Peter’s Basilica in Rome is sited on a huge tract of land called by the ancient Romans the Circus of Nero where Peter was killed. “A space was enclosed in the Vatican valley where Nero might manage his horses, without the spectacle being public. Soon he actually invited all the people of Rome, who extolled him in their praises, like a mob which craves for amusements and rejoices when a prince draws them the same way.” Tacitus (58-120 AD) Annals 14.14

Not as large as the Circus Maximus, Nero used his private Circus for personal as well as public entertainments such as the killing of Christians, one of whom was the Apostle Peter. Today St. Peter’s Square occupies most of the oval area of that ancient playground.

There is a crude brick tomb below the Papal Altar of Confession in St. Peter’s Basilica (below).

It has been greatly embellished in the last hundreds of years (below). 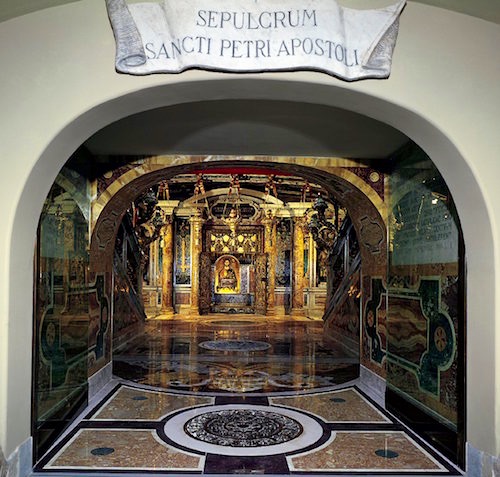 The tomb is now accessed by two semi-circular ramps that descend to the 4th century Constantinian Basilica. The ancient brick tomb, covered with red plaster, is scribbled with the names of people who had visited the tomb in ancient times and there are many invocations to Christ on it.

Almost two thousand years after Peter’s death in Pope Pius XII’s Christmas message on December 23, 1950, he startled the world with the announcement that the tomb of Peter had been found: “The relics of St. Peter have been identified in a way we believe convincing.”

Another Pope, John Paul VI, confirmed the discovery 18 years later on June 26, 1968: “We believe it our duty…to give you this happy announcement….we are right in believing that the few but sacred mortal remains have been traced of the Prince of Apostles, of Simon son of Jonah, of the fisherman named Peter by Christ.”

Apparently, the analyses of the bones of a c. 67-year-old man from the 1st century found in that 2,000-year-old brick tomb under the Papal Altar of Confession in St. Peter’s Basilica was convincing enough for the judicious Vatican to justify the announcements. Perhaps Petr…en, “Peter is here.”

An 8-foot-long marble sarcophagus inscribed with the words PAULO APOSTOLOMART (“PAUL APOSTLE MARTYR”) was discovered in 2002 during excavations around the church on the Via Ostiense (below left).

Three years later, in 2005, Vatican archaeologists announced they had identified the tomb of the Apostle to the Gentiles Paul under the Basilica in Rome that bears his name, Basilica of St. Paul Outside The Walls (below right).

In June of 2009 Pope Benedict XVI aka Joseph Aloisius Ratzinger announced that carbon testing on the bone fragments found in the marble sarcophagus dates to the 1st century AD.

The journey of the two most famous Christian martyrs and their bones continues.—Sandra Sweeny Silver