“As Jesus went on from there, he saw a man named Matthew sitting at the tax collector’s booth. ‘Follow me,’ he told him, and Matthew got up and followed him. While Jesus was having dinner at Matthew’s house, many tax collectors and sinners came and ate with him and his disciples. When the Pharisees saw this, they asked his disciples, ‘Why does your teacher eat with tax collectors and sinners?’ On hearing this, Jesus said, ‘It is not the healthy who need a doctor, but the sick. But go and learn what this means: I desire mercy, not sacrifice. For I have not come to call the righteous, but sinners.” Matthew 9:9-13

Notice it is Matthew, the despised tax collector, recounting this episode in his Gospel. The incident took place in Mathew’s own home, so it is a verifiable first-person narrative of events. We know from Jesus’ comment there were doctors in Israel in the first century AD.

The Hebrew word for doctor is rofe which means “to mend or sew together, bandager.” Perhaps the first time the nomadic Jews encountered physicians was in Genesis 50:2: “Then Joseph directed the physicians in his service to embalm his father Israel (Jacob). So the physicians embalmed him.”

It is difficult to be totally accurate about the time-frames of the early Patriarchs, but they probably lived c. 1900’s BC. Assume that Joseph became “second only to the Pharaoh in Egypt” (Genesis 41:39,40) and brought his father Jacob and family to Egypt in c. 1900 BC. When Joseph’s father died in Egypt, he had him embalmed by the embalmers who were called “physicians.” Perhaps it was from Egyptian embalmers the Jews fashioned their word for doctor rofe, “bandager.”

CLICK HERE to study and be convinced that Egyptian “embalmers” were, indeed, highly specialized and knowledgable about the external and the internal body like our physicians are.

One of the oldest books in the Bible is the Book of Job. This writer believes its date is very early—c. 1800-1600 BC. Nonetheless, Job’s three “comforters” are no comfort to Job in his extreme circumstances. He speaks angrily to them:

“What you know, I also know; I am not inferior to you. But I desire to speak to the Almighty and to argue my case with God. You, however, smear me with lies; you are worthless physicians, all of you!” Job 13:2-4

When we skip to a man who was living at the time of Jesus, the Roman naturalist Pliny the Elder (23 AD-79 AD), and his still extant and published book Natural History, he explores every subject one could imagine.

When Pliny writes about Medicine and Doctors in the first century AD, he, uncharacteristically, goes on a rant against the Greek doctors who had invaded his Rome:

“The medical art, so often modified and renewed as it has been, is still on the change from day to day, and still are we impelled onwards by the puffs which emanate from the ingenuity of the Greeks. It is quite evident too, that every one among them that finds himself skilled in the art of speech, may forthwith create himself the arbiter of our life and death: as though, forsooth, there were not thousands of nations who live without any physicians at all, though not, for all that, without the aid of medicine….And then besides, there is no law in existence whereby to punish the ignorance of physicians, no instance before us of capital punishment inflicted. It is at the expense of our perils that they learn and they experimentalize by putting us to death, a physician being the only person that can kill another with sovereign impunity.” Pliny the Elder, Natural History 29

By the way, Pliny the Elder’s own death had nothing to do with the Greek physicians he so despised. He died while exploring the Eruption of Mt. Vesuvius in August 79 AD.

CLICK HERE to read the written account of Pliney’s death by his nephew Pliny the Younger. It is a first person account of the Eruption of Mt Vesuvius. 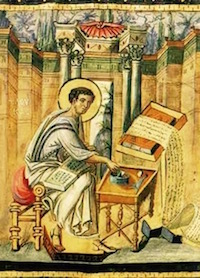 Luke (right), the author of the third Gospel and the Book of Acts, was a physician. Paul in Colossians 4:14 described Luke as a ”beloved physician.” Dr. Luke was a constant companion and perhaps physician to Paul who seemed to have chronic health problems. In one of Paul’s last letters to his young protege Timothy he writes: “…only Luke is with me.” (II Timothy 4:11)

Dr. Luke’s constant care of his “patient” Paul, in spite of the dangerous risks he took, demonstrates that “good physicians” have always been there for people in the ancient world and in our own day and age.

“Now a woman, having a flow of blood for twelve years, who had spent all her livelihood on physicians and could not be healed by any, came from behind and touched the border of His garment. And immediately her flow of blood stopped.

And Jesus said, ‘Who touched Me?’

When all denied it, Peter and those with him said, ‘Master, the multitudes throng and press You, and You say, ‘Who touched Me?’
But Jesus said, ‘Somebody touched Me, for I perceived power going out from Me.’ Now when the woman saw that she was not hidden, she came trembling; and falling down before Him, she declared to Him in the presence of all the people the reason she had touched Him and how she was healed immediately.

Confirming this miracle c. 300 years later is the first and great historian of the early church Eusebius of Caesarea (263-339 AD). Eusebius in his Church History or Ecclesiastical History, wrote the first history of the Christian Church, based on earlier literary sources, from his own time back to the times of the Apostles.

The following is from Eusebius’ Church History 7.18: 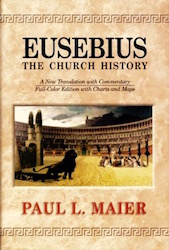 “Since I have mentioned this city (Caesarea Philippi), I should not omit a story that should be recorded also for those who follow us. The woman with a bleeding hemorrhage who was cured by our Savior, as we learn from the holy Gospels (Matthew 9:20–22, Mark 5:25–34,Luke 8:43–48), came from here, they claim. Her house was pointed out in the city and amazing memorials of the Savior’s benefit to her were still there. On a high stone base at the gates of her home stood a bronze statue of a woman on bent knee stretching out her hands like a suppliant. Opposite to this was another statue of the same material—a standing figure of a man clothed in a handsome double cloak and reaching his hand out to the woman….This statue, they said, resembled the features of Jesus and was still extant in my own time. I saw it with my own eyes when I stayed in the city…. I have examined likenesses of his apostles also—Peter and Paul—and in fact of Christ Himself preserved in color portrait paintings.”

In this passage we learn for the first time that the Biblical woman “subject to bleeding for twelve years” was a Gentile who lived in Caesarea Philippi within the Golan Heights. To honor her healing, she had, apparently, commissioned two statues, one of her and one of Jesus, to be placed at the gates of her home. 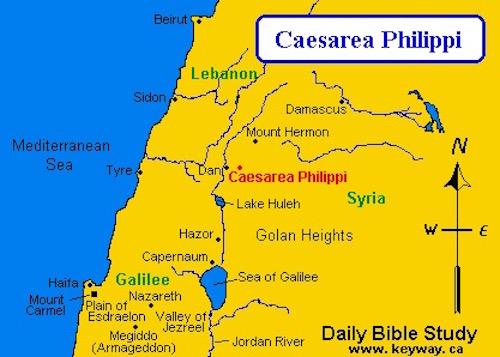 Eusebius refers to the many color portraits of Jesus and the Apostles still extant in his time. They have all disappeared into the fog of history. But there are in our own day testimonies by doctors and patients of healings as a result of prayer. Doctors have been crucial in the history of not only Biblical times but in all times, present and future. We thank God for those physicians (Latin physica “natural science”), for those seeking to relieve and to cure all of us from the fragility of our flesh.

BUT—my son Jesse wrote in an email to this writer:

“Seeing is not believing.
Believing is seeing.”

Very similar to what Jesus said to the menorrhagic woman.—Sandra Sweeny Silver