“Sindonology” from the Greek word sindon meaning “muslin sheet “is the scientific study of the Shroud of Turin. The Shroud of Turin is an ancient. sepia-colored, rectangular, 14.3 x 3.7 foot linen cloth woven in a three-to-one herringbone twill composed of flax fibrils with the front and the back image of a naked man with his hands folded across his groin on it. The Shroud is currently in the Cathedral of Saint John the Baptist in Turin, Italy.

The image of the man is best seen from afar. The closer one gets to the Shroud, the image becomes blurred and all one sees is the rust-colored blood stains on the cloth. Believers have always considered the Shroud as the linen cloth the dead Jesus was wrapped in after He was crucified:

“As evening approached, there came a rich man from Arimathea, named Joseph, who had himself become a disciple of Jesus. Going to Pilate, he asked for Jesus’ body, and Pilate ordered that it be given to him. Joseph took the body, wrapped it in a clean linen cloth, and placed it in his own new tomb that he had cut out of the rock. He rolled a big stone in front of the entrance to the tomb and went away. Mary Magdalene and the other Mary were sitting there opposite the tomb.” Matthew 27:57-61

Details on the image of the Shroud could not be adequately discerned until a miracle happened. An Italian lawyer and amateur photographer named Secondo Pia (1855-1941) took photos of the Shroud during a rare public exhibition of it in 1898 (see below). When he developed the film, he jumped back. The photographic negatives of the Shroud fleshed out all the features of the man on the Shroud.

Scientists and technicians took note and have studied the Shroud ever since. Some have concluded it is the true burial shroud of Jesus. Others have pronounced it a medieval forgery. But in 1978 a noted Swiss criminologist, Dr. Max Frei, took sticky tape samples from the Shroud lifted up from the fibers and found—POLLEN GRAINS.

Enter into the pollen/floral discussion two Israeli professors: Botanist Avinoam Danin of Jerusalem’s Hebrew University who published nine books on the flora of the Middle East and Dr. Uri Baruch, a palynologist (science of pollen and spores) and authority on Israeli antiquities.

Avinoam and Baruch found that of the hundreds of floral patterns and pollen grains found on the Shroud twenty-eight of them are from plants still growing in Israel and 70% of them are  found in the area from Jerusalem to Jericho (e.g. Gundelia tournefortii, Zygophyllum dumosum, Cistus creticus, Capparis aegyptis). Half of the floral images and pollen grains from the plants are found only in the Middle East or other similar areas but never in Europe, the favored location of the forgery of the Shroud.

As was the Jewish burial custom in the time of Jesus, most of the flowers were clustered around the head and chest of the man on the Shroud. All twenty-eight of the flowers would have been available in Jerusalem markets for fresh and burial bouquets. Many would have been growing along the roadside or in nearby fields and could have been gathered to honor the dead man. Twenty-seven of the identified plants are in bloom in March and April. Jesus was crucified in Jerusalem during the Passover in the Spring of c. 30 AD. (Matthew 26:12; Mark 14:1; Luke 22:1,7: John 18:28)

The scientists’ analyses positively identified many grains of pollen of the Gundelia tournefortii which has large thorns and blooms in Israel between March and May. Most of the grains of pollen from that plant have been recovered near the man’s shoulder. Could it have been the crown of thorns:

“They (Roman soldiers) stripped him and put a scarlet robe on him, and then twisted together a crown of thorns and set it on his head. They put a staff in his right hand. Then they knelt in front of him and mocked him. ‘Hail, king of the Jews!’ they said. They spit on him, and took the staff and struck him on the head again and again.” Matthew 27: 28-30 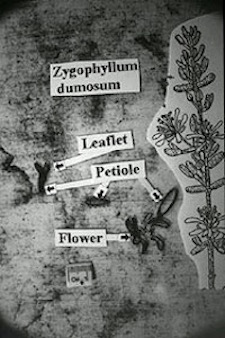 There were, also, small images of flowers on the Shroud. A flower seen in a clear image on the chest area of the Shroud is of the Zygophyllum dumosum species (left). The leaflet, petal and flower of Zygophyllum on the Shroud are highlighted in black.

According to Dr. Danin, the botanist, the plants Gundelia and Zygophyllum only coexist in a small area bounded by the lines linking Jerusalem and Jericho in Israel and Madaba and Karak in Jordan. “This combination of flowers can be found in only one region of the world,” Danin stated. “The evidence clearly points to a floral grouping from the area surrounding Jerusalem.” The two scientists are convinced from the pollen and floral patterns on the Shroud that the Shroud originated in Israel.

In addition to being unable to explain so many things about the Shroud of Turin, did it ever occur to modern skeptics that no medieval forger would have been able to forge pollen grains and floral images. Pollen grains are able to be seen only through a microscope. A medieval artist/forger did not even KNOW about individual GRAINS of pollen, could never ever have seen a microscopic grain of pollen—until the 1800’s AD.—Sandra Sweeny Silver