Modern readers can understand ancient Romans’ men and horses pitted against each other, betting, winning and losing. We can understand the Circus Maximus. What is impossible for us to understand is their blood sport. Not the drawing of blood during sport, but the spectacle of humans led into a sports arena to be torn to shreds by wild animals or forced to fight to the death while tens of thousands of people are watching, cheering, taunting, eating, talking and laughing.

Ignatius, the Christian Bishop of Syrian Antioch, was torn to pieces by lions in the Colosseum as 87,000 Romans approved and applauded. The following is a rendition of his trial in c. 107 before the Roman Emperor Trajan (reigned 98-117). It is taken almost verbatim from the ancient manuscript Martirium Colbertinum aka The Martyrdom of Ignatius:

Emperor Trajan looked down at the man in his seventies who was clasping iron chains around his stomach. “Who are you, wicked wretch, who transgress our commands and persuade others to do the same so that they should miserably perish like you will?” he growled.

Ignatius replied, “No one ought to call Theophorus a wicked wretch! All the evil spirits and demons you worship have departed from us who are the servants of the one God.” Ignatius, dragging his chains, moved closer to the Roman emperor. “But if because I am an enemy to these spirits, you call me wicked in respect to them, I quite agree with you. For because I have Christ the King of heaven within me, I destroy all the devices of these evil spirits.” 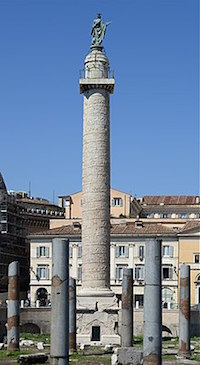 Trajan asked the scribe to hand him the list. He began to read the names of the people who were coming before him that day. This old wretch in front of him was supposed to be the leader of an unruly group in Antioch called Christians. Trajan was fresh from his victories over the Dacians ((101-102, 105-106 Romania/Bulgaria). While he was in Antioch taking care of this type of local business, he had instructed 80 million cubic yards of earth and rock be removed from Quirinal Hill in Rome in order to construct the Forum of Forums to celebrate this victory. At his death (10 years after Ignatius’ trial), his ashes were set into the base of the 125-foot column topped with a statue of him. Trajan’s Column (right) is still standing.

Powerful and omnipotent, the conqueror Trajan was confident he could deal with these commoners who were defaming the gods all over his empire. His Procurator in Antioch had been lobbying him to come to his city for some time.

“Theophorus. Theophorus,” Trajan said. “I see no ‘Theophorus’ on this list. Why are you talking about Theophorus? Who is Theophorus?” The emperor threw down the list. “I am Theophorus, the one who has Christ within his breast.” “I was told you were Ignatius. Well then,” said Trajan, “ be whoever you want to be. But, a question. Do I, your emperor, not seem to you to have the gods in my mind, too? The very gods whose assistance we enjoy in fighting against our enemies like the Dacians?”

Ignatius was emboldened. “You are in error, emperor, when you call the demons of your nation gods. For there is but one God who made heaven, earth, the sea and all that are in them. And one Jesus Christ, the only-begotten Son of God.”

“Jesus. Oh, yes, that Jesus.” The emperor knew the sect of Christians. He knew they believed that some Jew named Jesus was the Christ and had risen from the dead. It was there in Antioch that the people first called them “Christians” meaning “little christs” after christos the Greek word for “messiah.” Both the Hebrew word moshiach (messiah) and the Greek word christos mean “anointed one.”

“You mean the Jesus who was crucified under our Procurator Pontius Pilatus?”

Ignatius jumped in. “I mean the one who crucified sin along with its inventor, Emperor. And all the deceit and malice of the devil he has put under the feet of those who carry Him in their heart. That’s the Jesus I mean.” 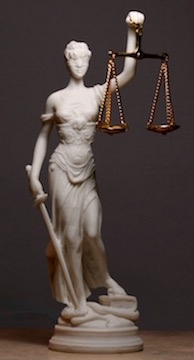 “Carry Him in their heart!” Trajan smiled and leaned forward. “So you are saying you carry within you that Jesus who was crucified. That’s not believable. How can you carry a god within you?” The emperor stood up and pointed to the marble statue of Justitia (left).

“I can’t take this statue of Justitia (Justice) and shove it inside me! I’ve heard enough.”

Trajan turned to the scribe. “I command that Ignatius who says that he carries about within him this Jesus who according to our Acta was crucified, dead and buried, I command that he be bound by soldiers, carried to the great Rome, and be there devoured by the beasts for the gratification of the people of Rome. Get him out of here!”

As Ignatius was hurried away by the soldiers, he cried out, “I thank you, Lord, that You have honored me with a perfect love toward You and that I will be bound with these chains like your apostle Paul!”

Trajan walked over to the scribe. “These Christians are insane! He’s going to be torn to pieces by a lion and he’s happy. Who’s next on the list?”

The account of Ignatius’ trial before the emperor in c. 107 in Antioch (modern Antakya in southern Turkey) is reputed to have been written by two eyewitnesses—Philo, a deacon from Tarsus and Rheus Agathopus, a Syrian. Scholars consider the account to be accurate. (For the original wording of the trial and the account of Ignatius’ long journey to Rome, see the Martirium Colbertinum or The Martyrdom of Ignatius.)

News of the Bishop of Antioch’s inspired eloquence and boldness before the emperor and of his death sentence spread swiftly throughout the nascent Christian communities in Asia Minor. All along the journey to Rome, Ignatius was greeted by Christians who comforted, encouraged and rendered homage to him.

Ignatius was already famous among early Christians because Jesus Himself had embraced him. Ignatius was the little child Jesus took into His arms in Matthew 18:1-5, Luke 9:46-48 and in Mark’s gospel 9:33-37:

“They came to Capernaum. When he (Jesus) was in the house, he asked them (the disciples): ‘What were you arguing about on the road?’ But they kept quiet because on the way they had argued about who was the greatest. Sitting down, Jesus called the Twelve and said, ‘If anyone wants to be first, he must be the very last, and the servant of all.’ Jesus took a little child and had him stand among them. Taking him in his arms, he said to them. ‘Whoever welcomes one of these little children in my name welcomes me, and whoever welcomes me does not welcome me but the one who sent me.’”

Ignatius called himself Theophorus meaning in Greek “God-Bearer” because Jesus had taken him as a young child into His arms. By this appellation, Ignatius witnessed to that event and to the God within his heart.

The trip to Rome with the Roman soldiers was grueling for the older man. In one of Ignatius’ letters he says: “From Syria even to Rome I fight with wild beasts, by land and sea, by night and by day, being bound amidst ten leopards…a company of soldiers who only grow worse when they are kindly treated.” The long journey with rough Roman soldiers prodding him on was a training camp for his contest in the Colosseum and he knew it.

The closer Ignatius got to Rome the more he anticipated his death:

“How I look forward to the lions that have been prepared for me! All I pray is that I will find them swift. I am going to make overtures to them so that…they will devour me with all speed. And if they are reluctant, I shall have to use force on them…Fire, cross, beast-fighting, hacking and quartering, splintering of bone and mangling of limb, even the pulverizing of my whole body. Let every horrid and diabolical torment come upon me provided only that I can win my way to Jesus Christ!” 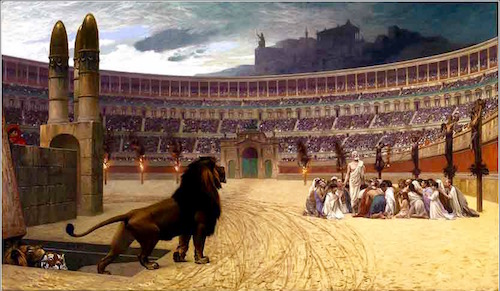 The church in Rome had many influential believers who wanted to intercede with the authorities on behalf of Ignatius. In his letter to them, he begs them to allow his death: “Permit me to be an imitator of the passion of my God. If any man has Him within himself, let him understand what I desire….If you (will) remain silent and leave me alone, I am a word of God. But if you save my flesh, then shall I be a mere cry.”

When they arrived at the Colosseum, the soldiers immediately hustled Ignatius into the arena:

“Then, being immediately thrown in according to the command of Trajan given some time ago, the spectacles (were) just about to close…it was a solemn day (dedicated to a god)…the people were assembled in more than ordinary numbers. They came together zealously (and Ignatius) was thus cast to the wild beasts close beside the temple.” 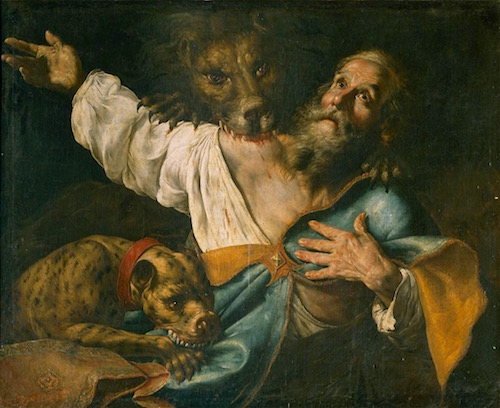 When Philo and Rheus claimed Ignatius’ body, “only the harder portions of his holy remains were left.” The lions had eaten all of him except his bones. His friends wrapped the gnawed bones in linen and took them back to Antioch. His relics were removed to Rome in the 7th century where they reside under the high altar in the Basilica di San Clemente.

A bus to “Colosseo” takes the modern tourist to the Basilica. The ruins of that blood-soaked amphitheater are very near the crypt that contains Ignatius’ revered relics. 2,000 years after the old Bishop’s death in 107, there are over 900 Christian churches in Rome. Ignatius of Antioch, the great Christian soldier, would not be amazed.—Sandra Sweeny Silver