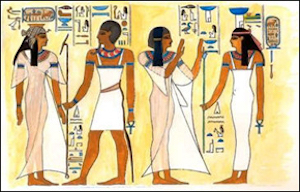 But throughout the ancient world from the Egyptians (c. 3000 BC) all the way into the Middle Ages (c. 1350) people have always worn some form of tunics and togas. The Egyptians lived in a predominantly hot climate so their garb (left) was more scant than in Greece, Rome or Europe, but the primary style was the same.

The wealthy in ancient times and in the Middle Ages were always able to color and to adorn the linen or wool fabric on their togas or tunics. As far back as Joseph and his “technicolor tunic” given to him by his father Jacob, the wealthy like Jacob (c. 2000 BC) could afford clothes with color and beauty:

“Now Israel (aka Jacob) loved Joseph more than all his brothers, since he was born to him in his old age, so he had made a richly-embroidered tunic for him.” Genesis 37:3 ISV translation 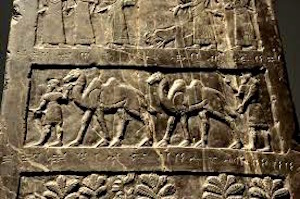 On the Black Obelisk of Shalmaneser III, an Assyrian king in the 9th century BC, we see the everyday wear of the tunic in the man leading a caravan (right). 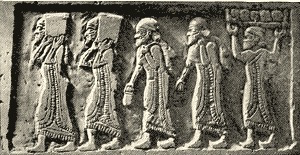 On the same obelisk are captives of the 9th century BC Jewish King “Jehu son of Omri” (so identified in cuneiform script) in their toga-like, short-sleeved, ankle-length robes with fringes on the sides and bottoms. The fringe embellishments show they were “royal” captives .

Sir Austen Henry Layard ( 1817-1894) at the age of 28 discovered the ruins of Nineveh and the Lachish reliefs in the Assyrian King Sennacherib’s palace. Sir Layard was a committed Christian and was thankful his discoveries of Nineveh and the reliefs recounting the Battle of Lachish in 701 BC had confirmed Biblical writings:

“Here (on the walls of the palace), therefore, was the actual picture of the taking of Lachish, the city as we know from the Bible, besieged by Sennacherib, when he sent his generals to demand tribute of (King) Hezekiah, and which he had captured before their return; (it is) evidence of the most remarkable character to confirm the interpretation of the inscriptions, and to identify the king who caused them to be engraved with the Sennacherib of Scripture. This highly interesting series of bas-reliefs contained, moreover, an undoubted representation of a king, a city, and a people, with whose names we are acquainted, and of an event described in Holy Writ.”
Austen Henry Layard, Discoveries Among the Ruins of Nineveh and Babylon, 1853

In addition to verifying historical truth in the Bible, for our purposes the reliefs show that the dress in 701 BC was the short tunic worn by men and young boys and a simple long toga worn by women and girls.

In II Chronicles 32:9, there is but one verse devoted to the Battle of Lachish. The Battle was a major defeat for the Jews, of course, and a major victory for the Assyrians as seen by the room of reliefs in Nineveh devoted to that Battle!

In the Middle Ages the monks and nuns (strongly tied to the ancient Roman world) wore the simple long dress of the toga. (Below) 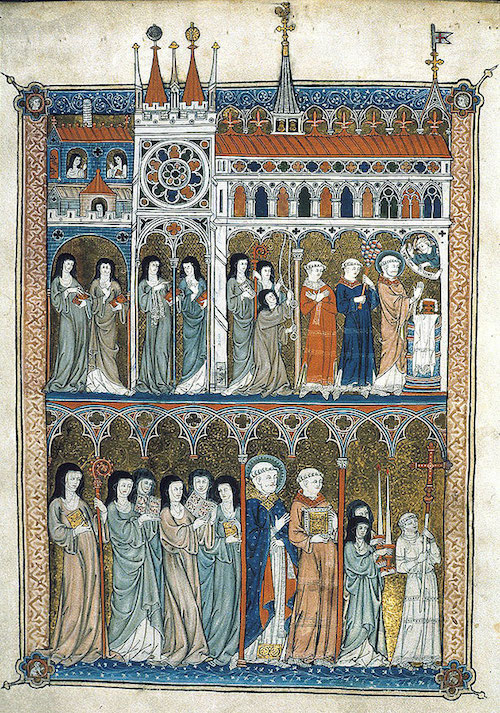 Over the centuries as the Christian Church moved farther north in Europe, woolen stockings, pants for the legs, hats for the head, fur coats and jackets were adopted. But in their paintings, we still see the classic cuts of the toga. (Below)

In the painting below, one can see the simple tunic with a cloth belt of the medieval peasant and the stockings and the hats. Notice how shoes cover the entire foot. The warmer-clime Romans only wore leather sandals.

From before the Roman to the medieval period and beyond, women usually wore long toga-like dresses. The toga was, as it was for thousands of years, just a long fabric panel, folded over with a neck-hole cut into the fold. Often sleeves were attached. Togas and tunics were sometimes belted with a fabric or leather belt. Peasants and soldiers had to keep their tunics at the knee or above in order to denote their standing/class in society. Rank and class in society have always been recognized by clothes.

We have over the centuries evolved our clothing by using other natural and synthetic fabrics. We have decorated our clothes with more sophisticated patterns and materials. We have added long pants, short pants, high boots, low boots, spandex enhancers, buttons, snaps, zippers, pajamas for sleeping instead of the same old tunics, holes/tears in dresses and pants to flaunt new fashions, neckties, starched shirts, et al. But clothing is still mainly a piece of material with a hole for the neck. It is in the ancient, medieval and modern world just a piece of cloth that covers our body.—Article by Sandra Sweeny Silver

“Clothes make the man. Naked people have little or no influence on society.”