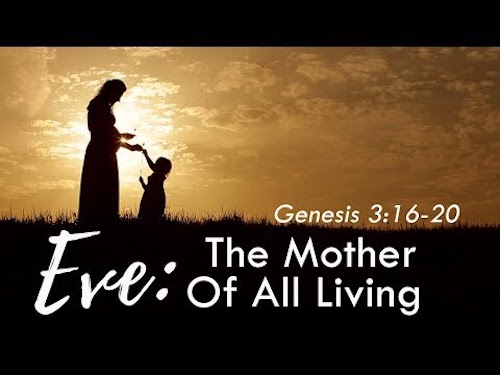 “Eve” /iːv/ is an English given name for a female derived from the Latin name Eva. It originates from the Hebrew חַוָּה Chavah/Havah – chavah, to breathe, and chayah, to live, or to give life. The traditional meaning of “Eve” is “life” or “living”. It can also mean “full of life” and “mother of life.”

In order to PROVE that Eve is the “mother of all living,” we have to have a little Biblical context of the first woman. The word “woman” comes from an Old English (O.E.) word “wimen” meaning “woman-man.”

“Now the Lord God had planted a garden in the east, in Eden; and there he put the man (Adam) he had formed… The Lord God said, “It is not good for the man to be alone. I will make a helper suitable for him.”… So the Lord God caused the man to fall into a deep sleep; and while he was sleeping, he took one of the man’s ribs and then closed up the place with flesh. Then the Lord God made a woman from the rib he had taken out of the man, and he brought her to the man. The man said, “This is now bone of my bone and flesh of my flesh she shall be called woman, for she was taken out of man.” From Genesis Chapter 2

There is the old joke—“Man’s first sleep was his last repose.” And there is a continued lie—“that’ s why men have one less ribs than women do.” The vast majority of men and women are born with 12 pairs of ribs—12 on one side and 12 on the other side. There are genetic anomalies in a few people. 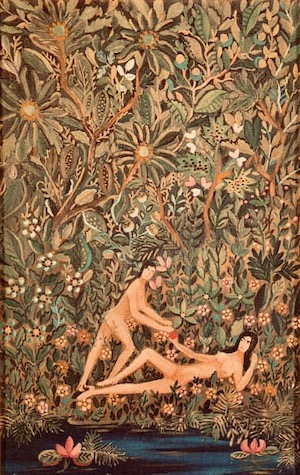 In Chapter 3:20 of Genesis it claims: “Adam named his wife Eve, because she would become the mother of all the living.”

Is the Edenic EVE, the wife of the first human Adam, really the “mother of all living?” That would have to mean that Eve’s DNA or something else would be passed forever  through all living creatures with a womb.

The PROOF of EVE as the “mother of all living” only began in the late 1800’s early 1900’s —many, many millennia after the death of Eve—it cannot be possible for us humans to determine, even within a reasonable timeline, WHEN God created mankind. But it is for sure that we did not evolve from a water thing, which went up on land and “evolved” into a  perfectly accurate/infinite human being.

Only a theory (“an idea used to account for a situation or justify a course of action”) and not subject to PROOF.

It is an unknown amount of time from Adam’s and Eve’s creation to the explanation of the question: “WHAT MAKES A MAN A MALE AND WHAT MAKES A WOMAN A FEMALE?” The PROOF came in the late 1800’s and the early 1900’s—i.e. VERY recently.

It’s all about CHROMOSOMES—structures within a cell’’s nucleus that contain a person’s genes. Hermann Paul August Otto Henking (16 June 1858 – 28 April 1942) was a cytologist who discovered the X chromosome in 1890 or 1891. He named this “X element” because its strange behavior made him not sure whether it was genuinely a chromosome. It later became the X chromosome after it was established that it was indeed a chromosome.

One can clearly see that Eve’s X chromosome is in females (XX) AND in males (XY)—she lives on as “the mother of ALL living.”

And if you say, “what about others that are NOT human?” “How about cows, for example?” What determines if a calf is a bull (male) or a heifer (female)?

When mating, the female cow will pass on 2 X chromosomes and the male bull’s sperm will pas on 1 X and 1 Y chromosome. The bull’s sperm is usually half X sperm and half Y sperm—50% chance of a heifer (female XX) and 50% chance a bull (male XY) .

But the first woman EVE, “the mother of ALL living” is always there in those living beings that have wombs.

Eve is called in some scientific circles “Mitochondrial Eve.” “Mitochondria” are known as the “power-house”  of protoplasm of a cell outside the cell’s nucleus. It keeps it going. It is Eve’s “power” to endure in all living things FOR EVER—as the Bible says:

“Adam named his wife Eve, because she would become the mother of all the living.” Genesis 3:20 — Article by Sandra Sweeny Silver