Emperor Nero was one of the most diabolical of Rome’s Twelve Caesars. He practiced Machiavellian rules 1,400 years before Machiavelli wrote them. He used the absolute power he possessed to preserve himself at all costs. To Nero, the end always justified the means. When he burned Rome to the ground in July 64 AD and his heinous act became known, he cast about for a scapegoat to preserve the State—himself. “Not my fault. It’s their fault.” “Change the subject from me to them.” Politics: from Aristotle’s ta Politika, the science of government.

Tacitus on the Christians

“But all human efforts, all the lavish gifts of the emperor (Nero) and the propitiations of the gods, did not banish the sinister belief that the conflagration (burning of Rome in 64 AD) was the result of an order (given by Nero). Consequently, to get rid of the report, Nero fastened the guilt and inflicted the most exquisite tortures on a class hated for their abominations, called “Chrestians” by the populace. Christus, from whom the name had its origin, suffered the extreme penalty during the reign of Tiberius at the hands of one of our procurators, Pontius Pilate, and a most mischievous superstition, thus checked for the moment, again broke out not only in Judea, the first source of the evil, but even in Rome, where all things hideous and shameful from every part of the world find their center and become popular. Accordingly, an arrest was first made of all (Christians) who pleaded guilty; then, upon their information, an immense multitude was convicted, not so much of the crime of firing the city, as of hatred against mankind. Mockery of every sort was added to their deaths. Covered with the skins of beasts, they were torn by dogs and perished, or were nailed to crosses, or were doomed to the flames and burnt, to serve as a nightly illumination, when daylight had expired.” Tacitus, Annals, 15.44

Rome was destroyed by fire in July 64; Tacitus’ story suggests that the Christians were killed in the same summer. An early Christian tradition adds some details, such as the decapitation of Paul and the crucifixion of Peter. 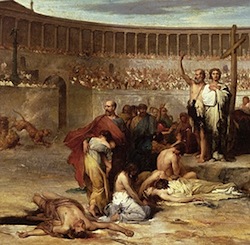 Why did Nero blame the Christians? The answer may be that they were living near the place where the fire started: the eastern part of the Circus Maximus. It should be noted that the first Roman Christians were Jews and probably lived with the other Jews. (The ways of Judaism and Christianity parted later.) One of the Jewish quarters in Rome was just east of the Circus, near the Capena Gate. It is described by the Roman author Juvenal as a slum area: “Now, the grove with its sacred spring and the shrine [of a water goddess] are rented to Jews, whose worldly goods are no more than a basket and some hay. The woods has become the haunt of beggars.”

That there were Christians living among the Jewish proletariat, is also suggested by the presence of a very ancient church, the SS. Nereo ed Achilleo,  which is, in a venerably old legend, connected with Peter’s last days. Both the Capena Gate and this church are situated on the Appian Road, which was also connected with the last days of Peter.

So, there were Jews living near the place where the fire started, and there was another reason to suspect the people near the Capena Gate: their part of the city was not destroyed by the fire. But Nero could never punish the Jews of Rome: there were thousands of them. The Christians, on the other hand, were an easy target.

Moreover, there may have been some element of distorted truth in the accusation, because the Christians believed that Rome would be destroyed during Christ’s return. They must have responded enthusiastically when they saw “Babylon” burning, and in fact, Tacitus tells us that at least some of them pleaded guilty, i.e. admitted something that their interlocutors interpreted as a confession.

Their execution (in a circus on the Vatican hill, where Nero’s family possessed a villa and a park) was a kind of comic relief to the badly hit Romans. Tacitus’ remark that “they were covered with the skins of beasts and torn by dogs” suggests that several Christians were the 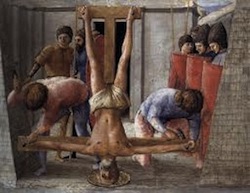 unwilling actors in a mythological tableau vivant: the death of Actaeon, a legendary hunter who was devoured by his own dogs. In the First letter of Clement, we also read about women being tortured as if they were the mythological Danaids or the legendary criminal Dirce (6.2). The climax of these cruel shows was the mockery of the crucifixion of Christ: according to a second-century tradition, the Christian leader Peter was crucified upside down.

[This article, Tacitus on the Christians and the Commentary, is from the website livius.org. It is a good site to access the works of some ancient authors and to read informed articles on ancient texts, ancient writers and ancient events.]