Aesop’s Fables, or the Aesopica, is a collection of fables credited to Aesop, a slave and storyteller believed to have lived in ancient Greece between 620 and 564 BC. Experts differ as to the race, the birthplaces, the literacy, the travels, the look of him (some say he was “extremely ugly”), the almost every thing about this man. By “experts” one means not only moderns but the ancient mentions of him: e.g. Aristotle (384—322 BC) in Rhetoric 2.20; Herodotus (5th century BC) in Histories 2.134. Aristophanes, a comic playwright in the 400’s BC speaks of “reading Aesop.” Even as early as the 400’s BC Aesop’s Fables were in manuscripts and scrolls.

Aesop was a man who lived and was read and appreciated for his stories and morals in ancient times as well as down through the ages to our time.

Many believe Aesop’s stories are only for children. Not so. Using animals as teaching symbols, Aesop teaches the adult as he/she reads these winsome stories to children.

Apollonius of Tyana, a 1st-century AD philosopher, best illustrates this Aesopian principle: “… like those who dine well off the plainest dishes, (Aesop) made use of humble incidents to teach great truths, and after serving up a story he adds to it the advice to do a thing or not to do it. Then, too, he was really more attached to truth than the poets are; for the latter do violence to their own stories in order to make them probable; but (Aesop) by announcing a story which everyone knows not to be true, told the truth by the very fact that he did not claim to be relating real events.”

The Country Mouse and the City Mouse told by Aesop, illustrated by Milo Winter in 1919 (below), is preserved in a collection in the Library of Congress. The Congressional Library was founded in 1800 with a core collection of 3,000 books. On August of 1814 British soldiers burned the Capitol Building in Washington and the books were destroyed. Wasting no time in reestablishing this oldest of federal cultural institutions, in January of 1815 the Congress approved the purchase of Thomas Jefferson’s extensive library of 6,487 books for a mighty sum in those days—$23,950.

Today, the Library of Congress in Washington, D.C. is the largest library in the world, with 39 million books, half of which are in 470 languages other than English. The Library, also, possesses millions of tapes, photographs, sheet music, etc. The Library occupies three buildings on Capitol Hill. The buildings are remarkable public spaces and public works of art. Each is named after a President of the United States who has a strong connection with the creation of Congress’s library. 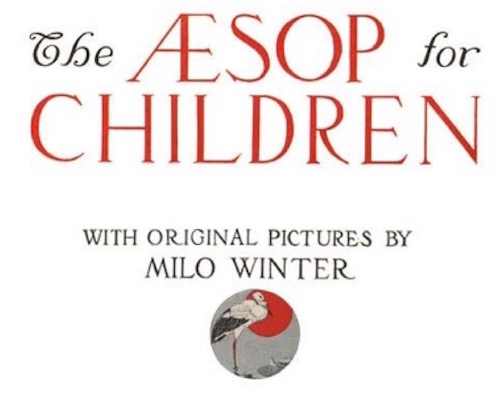 A Town Mouse once visited a relative who lived in the country. For lunch the Country Mouse served wheat stalks, roots, and acorns, with a dash of cold water for drink. The Town Mouse ate very sparingly, nibbling a little of this and a little of that, and by her manner making it very plain that she ate the simple food only to be polite.

After the meal the friends had a long talk, or rather the Town Mouse talked about her life in the city while the Country Mouse listened. They then went to bed in a cozy nest in the hedgerow and slept in quiet and comfort until morning. In her sleep the Country Mouse dreamed she was a Town Mouse with all the luxuries and delights of city life that her friend had described for her. So the next day when the Town Mouse asked the Country Mouse to go home with her to the city, she gladly said yes. 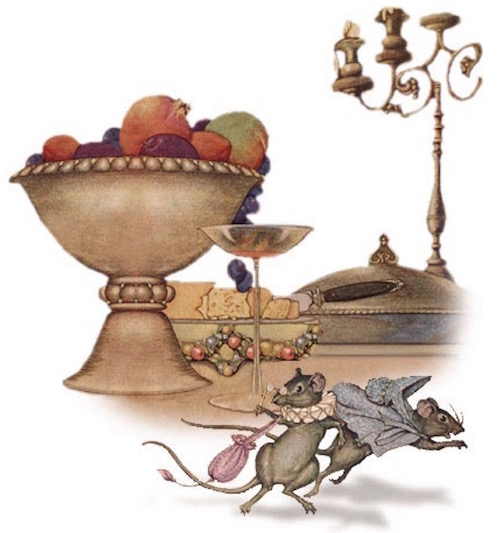 When they reached the mansion in which the Town Mouse lived, they found on the table in the dining room the leavings of a very fine banquet. There were sweetmeats and jellies, pastries, delicious cheeses, indeed, the most tempting foods that a Mouse can imagine. But just as the Country Mouse was about to nibble a dainty bit of pastry, she heard a Cat mew loudly and scratch at the door. In great fear the Mice scurried to a hiding place, where they lay quite still for a long time, hardly daring to breathe. When at last they ventured back to the feast, the door opened suddenly and in came the servants to clear the table, followed by the House Dog. 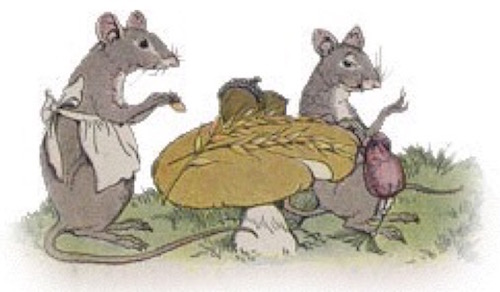 The Country Mouse stopped in the Town Mouse’s den only long enough to pick up her carpet bag and umbrella.

“You may have luxuries and dainties that I have not,” she said as she hurried away, “but I prefer my plain food and simple life in the country with the peace and security that go with it.”

Moral: “Poverty with security is better than plenty in the midst of fear and uncertainty.”  Aesop, born with wisdom

The Biblical Job with his wisdom born out of suffering:

Solomon (c. 950 BC) considered the Wisest Man who ever lived—“The Wisdom of a Solomon.”

Proverbs 6:6 “Go to the ant, you sluggard; consider its ways and be wise!”

Proverbs 30:27, 28 “The locusts have no king, Yet they all advance in ranks; The spider skillfully grasps with its hands, And it is in kings’ palaces.”—Article by Sandra Sweeny Silver