This article will not be sprinkled with images. No images could describe the last Great Persecution (aka Diocletian’s Persecution 303—313) of our early Christian brothers and sisters.. The Christian historian Eusebius (269-339) who was eyewitness to this last great persecution records:

“I myself was there when this was happening….to luminaries in Palestine and those in Tyre of Phoenicia…who under countless lashes and perseverance displayed (they were) champions of godliness: at the contests with man-eating beasts that followed the floggings, when they were attacked by leopards, bears of all kinds, wild boars and bulls goaded with hot irons….(and there was) incredible courage of these noble people in facing each of the beasts….You would have seen a youth not yet twenty (in front of lions) standing unchained, his arms spread in the form of a cross and his mind at ease, in leisure prayer to the Deity….You would also have seen others…thrown to a maddened bull….in Egypt….others courageously bared their necks to the executioners or died of torture or hunger. Some again were crucified as criminals usually are, while others, even more cruelly, nailed in the opposite way, head downward, and kept alive until they died of hunger on the cross….Need I cite the names or numbers of the rest of the varieties of their martyrdoms? Sometimes they were killed with an axe, as was the case in Arabia, or had their legs broken, as those in Cappadocia (part of modern Turkey). At other times they were hung upside down over a slow fire, so that smoke rising from the burning wood suffocated them, as in Mesopotamia. Sometimes noses, ears and hands were mutilated and the other parts of the body butchered, as was the case in Alexandria….At Antioch they were roasted on hot gridirons for prolonged torture and seared to death….In Pontus (area in Turkey around the Black Sea), others suffered things horrifying to hear: sharp reeds were driven into their fingers under the nail ends, or molten lead was poured down their backs, scalding the vital parts of their bodies. Others endured shameful, pitiful, unmentionable suffering in their private parts and intestines, which the noble, law-abiding judges eagerly invented, trying to outdo one another in devising new tortures as if contending for a prize. These tortures came to an end when their gruesome wickedness wore them out. Tired of killing and sated with blood, they turned to what they deemed mercy and humanity in no longer harming us….Instead, orders were now issued that their eyes be gouged out and one of their legs maimed—which was ‘humanity,’ in their opinion and ‘the lightest of punishments.’ As a result of such philanthropy on the part of godless men, it is now impossible to report the vast number of people who first had their right eye sliced out with a sword and cauterized with fire and the left foot rendered useless by branding irons applied to the joints. After this they were condemned to the copper mines in the provinces, less for work there and more for the abuse and hardship they would receive, as well as other ordeals too numerous to report. Their dauntless deeds exceed all calculation. In all these trials the magnificent martyrs of Christ were so distinguished throughout the (Roman) world that eyewitnesses of their courage under torture were astounded. (The martyrs) provided in themselves clear proof (to the heathen) that the power of our Savior is divine and ineffable indeed….they preferred to suffer for the faith rather than transfer to idols the reverence due to God. As for the women, inspired by the Divine Word, they showed themselves as manly as the men. Some were subjected to the same ordeals as the men and won the same prizes for valor.” Church History 8.7.8.12.14

“There were so many martyrs in Africa at this time that the Coptic Churches of Egypt and Abyssinia (Ethiopia) still date their calendars from the accession of Emperor Diocletian to the throne in 284. Eusebius describes one governor in Palestine as being so eager to kill Christians that in one day, November 2, 307, he had a man Dominus burned alive, some young men castrated, sent three virgins to the brothels and three young men to the gladiators, had a minister of the gospel exposed to wild animals and imprisoned a priest, a scholar and an apologist for the faith.” Eusebius, Martyrs of Palestine 7.3.7 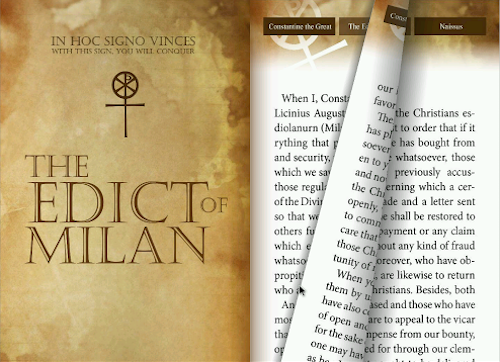 “… we thought to arrange that no one whatsoever should be denied the opportunity to give his heart to the observance of the Christian religion, of that religion which he should think best for himself, so that the Supreme Deity, to whose worship we freely yield our hearts, may show in all things His usual favor and benevolence. Therefore, your (Christian) worship should know that it has pleased us to remove all conditions whatsoever, which were in the rescripts formerly given to you officially, concerning the Christians and now any one of these who wishes to observe Christian religion may do so freely and openly, without molestation…. We thought it fit to commend these things most fully to your care that you may know that we have given to those Christians free and unrestricted opportunity of religious worship….”

Deeply depressed and struggling with an unknown illness, it is thought Diocletian probably/may have committed suicide December 3, 312.

As the early Christian author Tertullian (160—220 AD) wrote: “The blood of the martyrs is the seed of the Church.” Apologeticus, Chapter 50—Article by Sandra Sweeny Silver