The Nestorian Stele entitled 大秦景教流行中國碑 was erected in China in 781. On its heading in Traditional Chinese is:
大秦景教流行中國碑

The literal meaning in English is “Stele to the Propagation in China of the Luminous Religion of Daqin.” Daqin was what the Chinese called the Roman Empire or Syria in particular.

To the left is The Nestorian Stele on its Tortoise Pedestal (added after its find), in Beilin Museum, Xi’an, China. The Monument is a stele, a stone slab erected in 781 AD during the Tang dynasty documenting c. 150 years of Christian history (from c. 635 AD until 781) in China. The buried stele was unearthed in the late Ming dynasty (between 1623 and 1625 AD)

Written in Chinese and Syriac, the stone describes the existence of Christian communities in several cities in northern China. The Stele was buried in 845, probably during religious persecution. The Stele was not rediscovered until 1625, 780 years after it was buried.

Nestorianism was named after the Christian theologian Nestorius (386–450), Patriarch of Constantinople from 428 to 431. At that time in history (8th century AD), the Nestorian Christian church had been accepted as a legitimate religion by the Tang Emperor Taizong.

The missionary Alopen (Chinese: 阿罗本 pinyin: Āluóběn) in 635 AD stood before Emperor Taizong and presented to him the Bible and the words of Jesus Christ in the Gospels. The Syrian Alopen is the first missionary we know for sure (as a result of the Nestorian Stele) to have travelled the Silk Road all the way to China.

The following is an edited version (by this writer) of the contents of the Nestorian Stele.

In large capital letters at the top of the Nestorian Stele it reads: “THE TABLET OF THE SPREAD OF THE TA CH’IN ILLUSTRIOUS RELIGION IN CHINA.”

On the extreme right of the stele, in Chinese is:

“The Tablet of the Spread of the Illustrious Religion in China, Eulogy with introduction, composed by Ching-ching, monk of the Ta Ch’in monastery.” And in Syriac: “Adam, priest, chorepiscopos, and Fapshi of Sinestan.”

The main inscription, in Chinese, is as follows:

“Behold the unchangeably true and invisible, who existed through all eternity without origin; the far-seeing perfect intelligence, whose mysterious existence is everlasting; operating on primordial substance he created the universe, being more excellent than all holy intelligences, inasmuch as he is the source of all that is honorable. 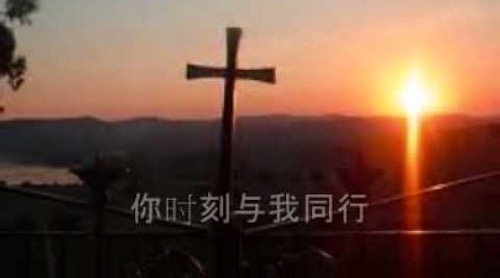 …This is our eternal true lord God, triune and mysterious in substance. He appointed the cross as the means for determining the four cardinal points, he moved the original spirit, and produced the two principles of nature; the somber void was changed, and heaven and earth were opened out; the sun and moon revolved, and day and night commenced; having perfected all inferior objects, he then made the first man; upon him he bestowed an excellent disposition, giving him in charge the government of all created beings; man, acting out the original principles of his nature, was pure and unostentatious; his unsullied and expansive mind was free from the least inordinate desire; until Satan introduced the seeds of falsehood, to deteriorate his purity of principle; the opening thus commenced in his virtue gradually enlarged, and by this crevice in his nature was obscured and rendered vicious; 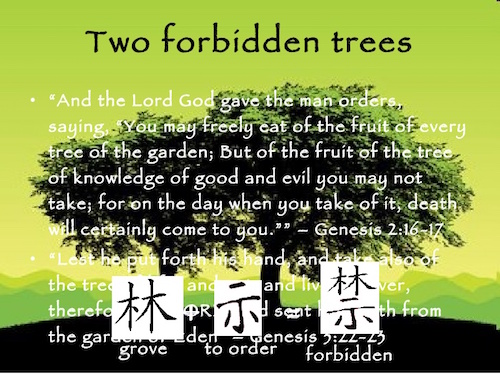 …(man’s) intellects and thoughts continually wavering, their minds and affections incessantly on the move, they never obtained their vast desires, but being exhausted and distressed they revolved in their own heated atmosphere; till by an accumulation of obscurity they lost their path, and after long groping in darkness they were unable to return. Thereupon, our Trinity being divided in nature, the illustrious and honorable Messiah, veiling his true dignity, appeared in the world as a man; angelic powers promulgated the glad tidings, a virgin gave birth to the Holy One in Syria; a bright star announced the felicitous event, and Persians observing the splendor came to present tribute;

…the ancient dispensation, as declared by the twenty-four holy men ( Old Testament prophets?), was then fulfilled, and he laid down great principles for the government of families and kingdoms; he established the new religion of the silent operation of the pure spirit of the Triune; he rendered virtue subservient to direct faith; he fixed the extent of the eight boundaries,  thus completing the truth and freeing it from dross; he opened the gate of the three constant principles, introducing life and destroying death; he suspended the bright sun to invade the chambers of darkness, and the falsehoods of the devil were thereupon defeated; he set in motion the vessel of mercy by which to ascend to the bright mansions, whereupon rational beings were then released, having thus completed the manifestation of his power, in clear day he ascended to his true station.

Twenty-seven sacred books (the number in the New Testament) have been left, which disseminate intelligence by unfolding the original transforming principles. By the rule for admission, it is the custom to apply the water of baptism, to wash away all superficial show and to cleanse and purify the neophytes. 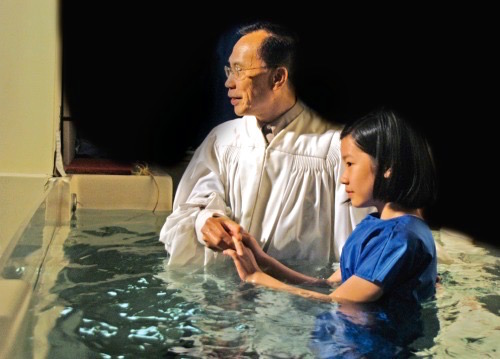 …As a seal, they hold the cross, whose influence is reflected in every direction, uniting all without distinction. As they strike the wood, the fame of their benevolence is diffused abroad; worshiping toward the east, they hasten on the way to life and glory; they preserve the beard to symbolize their outward actions, they shave the crown to indicate the absence of inward affections; they do not keep slaves, but put noble and mean all on an equality; they do not amass wealth, but cast all their property into the common stock; they fast, in order to perfect themselves by self-inspection; they submit to restraints, in order to strengthen themselves by silent watchfulness; seven times a day they have worship and praise for the benefit of the living and the dead; once in seven days they sacrifice, to cleanse the heart and return to purity.

It is difficult to find a name to express the excellence of the true and unchangeable doctrine; but as its meritorious operations are manifestly displayed, by accommodation it is named the Illustrious Religion. Now without holy men, principles cannot become expanded; without principles, holy men cannot become magnified; but with holy men and right principles, united as the two parts of a signet, the world becomes civilized and enlightened.

In the time of the accomplished Emperor Tai-tsung, the illustrious and magnificent founder of the dynasty, among the enlightened and holy men who arrived was the most-virtuous Olopun, from the country of Syria.

…Observing the azure clouds, he bore the true sacred books; beholding the direction of the winds, he braved difficulties and dangers. In the year of our Lord 635 he arrived at Chang-an; the Emperor sent his Prime Minister, Duke Fang Hiuen-ling; who, carrying the official staff to the west border, conducted his guest into the interior; the sacred books were translated in the imperial library, the sovereign investigated the subject in his private apartments; when becoming deeply impressed with the rectitude and truth of the religion, he gave special orders for its dissemination.

In the seventh month of the year A.D. 638 the following imperial proclamation was issued:

‘Right principles have no invariable name, holy men have no invariable station; instruction is established in accordance with the locality, with the object of benefiting the people at large. The greatly virtuous Olopun, of the kingdom of Syria, has brought his sacred books and images from that distant part, and has presented them at our chief capital. Having examined the principles of this religion, we find them to be purely excellent and natural; investigating its originating source, we find it has taken its rise from the establishment of important truths; its ritual is free from perplexing expressions, its principles will survive when the framework is forgot; it is beneficial to all creatures; it is advantageous to mankind. Let it be published throughout the Empire, and let the proper authority build a Syrian church in the capital in the I-ning May, which shall be governed by twenty-one priests.’

When the virtue of the Chau Dynasty declined, the rider on the azure ox ascended to the west; the principles of the great Tang becoming resplendent, the Illustrious breezes have come to fan the East….moreover, practicing the discipline of the Illustrious Religion, he (Emperor) distributed his riches in deeds of benevolence; every year he assembled those in the sacred office from four churches, and respectfully engaged them for fifty days in purification and preparation; the naked came and were clothed; the sick were attended to and restored; the dead were buried in repose; even among the most pure and self-denying of the Buddhists, such excellence was never heard of; the white-clad members of the Illustrious Congregation, now considering these men, have desired to engrave a broad tablet, in order to set forth a eulogy of their magnanimous deeds.

The true Lord is without origin,
Profound, invisible, and unchangeable;
With power and capacity to perfect and transform,
He raised up the earth and established the heavens.

Divided in nature, he entered the world,
To save and to help without bounds;
The sun arose, and darkness was dispelled,
All bearing witness to his true original.

….When the pure, bright Illustrious Religion
Was introduced to our Tang Dynasty,
The Scriptures were translated, and churches built,
And the vessel set in motion for the living and the dead;
Every kind of blessing was then obtained,
And all the kingdoms enjoyed a state of peace….”

The number of Christians in China today is estimated as 67 million. But there are millions more who attend “underground/home churches.”— Article by Sandra Sweeny Silver