Because of the Ice Man, we know that men, especially, have always had tattoos for at least thousands of years or more. The forever-marks on parts of the bodies illustrate beliefs in gods, desires, honoring of others and other self-identifying tattoos. That is the main purpose of the new fashion of tattooing. Tattoos “call attention” to the one who has the tattoo or tattoos.

But tattoos have traditionally been seen as “not a good thing.” In the Chinese Zhou dynasty (1046–256 BC), the longest-lived dynasty, authorities put facial tattoos on people as punishment for certain crimes and to permanently mark those who were prisoners or slaves. The ancient Romans put tattoos on slaves, gladiators and criminals. Even in our modern times, the Nazis tattooed numbers on the arms of Jews during the Holocaust and that was considered then and now bad, de-humanizing.

So there is a very long history of tattoos meaning “not a good thing,” meaning only the oppressed or criminals would have a tattoo. A tattoo was a “stigma.” None in the past went to a tattoo artist, paid them money and asked them for a tattoo.

There is in the Old Testament as far back as c. 1500 BC a law banning tattoos: “Do not cut your bodies for the dead or put tattoo marks on yourselves. I am the Lord.” Leviticus 19:28 NIV

The Egyptians tattooed themselves and in that time in BC history, the Jews had just been kicked out of Egypt and were on their Exodus. Moses was given by God the first five books of the Old Testament called the Torah, which included the Ten Commandments.

All the Jews had previously seen for c. 400 years during their captivity in Egypt were pagan religions, pagan dress, pagan practices. The Law against tattoos attempted to ban one of those heathen practices. But one may say, Yes, it is there but tattoos are banned only ONCE in the Bible. True. But here are other things that are banned ONLY ONCE in the Old Testament:

Does anyone think bestiality is now a good thing because it has scant mention in the Old Testament?

“Do not prostitute thy daughter, to cause her to be a whore; lest the land fall to whoredom, and the land become full of wickedness.” Leviticus 19:29 KJV

Does anyone think it is now okay for a parent to prostitute his/her daughter? 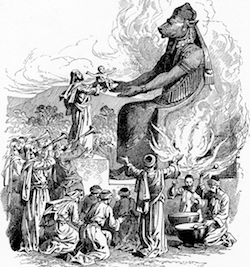 “Do not give any of your children to be sacrificed to Moloch, for you must not profane the name of your God. I am the LORD.” NIV

The Christian Emperor Constantine I banned tattoos on the face in 316 AD reasoning that “man has been created in the image of God and to so defile the face is to disgrace the Divine.”

The Christian theologian Basil of Caesarea aka St. Basil the Great (330—379 AD) wrote:

“No man shall let his hair grow long or tattoo himself as do the heathen, those apostles of Satan who make themselves despicable by indulging in lewd and lascivious thoughts. Do not associate with those who mark themselves with thorns and needles so that their blood flows to the earth.”

In 787 the Second Council of Nicea banned all tattoos as a “pagan practice.”

The propensity of man to tattoo him/her self goes WAAYY back as can be seen with the Ice Man. Tattooing was always in the recent (1860’s —to NOW) United States a “thing” sailors and soldiers did. But in the 1970’s, it became popular with young people. According to statistics c. 55% of 30-somethings are tatted. c. 35% of those aged 18—24 have tattoos.

Romans 12:2 “And be not conformed to this world: but be ye transformed by the renewing of your mind, that ye may prove what is that good, and acceptable, and perfect, will of God.” Romans 12:2 KJV—Article by Sandra Sweeny Silver