IF Jesus was born in c.6—4 BC and when He was at age 12 talking with and listening to the learned teachers/rabbis in the Temple in Jerusalem, that would have been in c. 6—8 AD. The rabbis listened to Him and even asked the very young Jesus questions. What language did Jesus and the rabbis speak? The rabbis who were usually born and raised in Israel could speak both Hebrew and Aramaic. The young Jesus spoke the Aramaic language of the people in Nazareth where he was raised. But for 3 days he had been speaking with rabbis who spoke and read Hebrew. This writer believes Jesus, also, spoke and read Hebrew with them which caused the rabbis to be “amazed at His understanding and His answers to questions.” 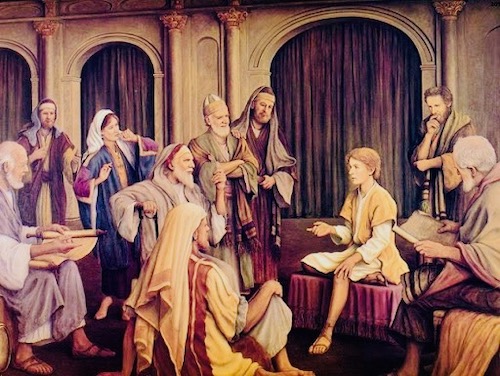 “Every year Jesus’ parents went to Jerusalem for the Festival of the Passover. When he was twelve years old, they went up to the festival, according to the custom. After the festival was over, while his parents were returning home, the boy Jesus stayed behind in Jerusalem, but they were unaware of it. Thinking he was in their company, they traveled on for a day. Then they began looking for him among their relatives and friends. When they did not find him, they went back to Jerusalem to look for him. After three days they found him in the temple courts, sitting among the teachers, listening to them and asking them questions. Everyone who heard him was amazed at his understanding and his answers. When his parents saw him, they were astonished. His mother said to him, “Son, why have you treated us like this? Your father and I have been anxiously searching for you.”

“Why were you searching for me?” he asked. “Didn’t you know I had to be in my Father’s house?” But they did not understand what he was saying to them.

Then he went down to Nazareth with them and was obedient to them. But his mother treasured all these things in her heart. And Jesus grew in wisdom and stature, and in favor with God and man.” Luke 2:41-52

About 18 years later when Jesus was about 30 years old, He began His public ministry: “Now Jesus himself was about thirty years old when he began his ministry.” Luke 3:23

One of the places Jesus visited in His early ministry was his hometown of Nazareth. 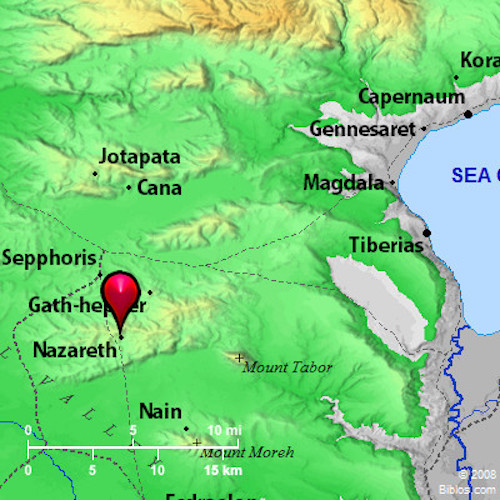 On the Sabbath He was given the book of Isaiah to read in Hebrew. He chose to read Isaiah 61:1,2:

“The Spirit of the Lord is on me, because he has anointed me to proclaim good news to the poor. He has sent me to proclaim freedom for the prisoners and recovery of sight for the blind, to set the oppressed free, to proclaim the year of the Lord’s favor.”

“He went to Nazareth, where he had been brought up, and on the Sabbath day he went into the synagogue, as was his custom. He stood up to read, and the scroll of the prophet Isaiah was handed to him. Unrolling it, he found the place where it is written:

“The Spirit of the Lord is on me, because he has anointed me to proclaim good news to the poor. He has sent me to proclaim freedom for the prisoners and recovery of sight for the blind, to set the oppressed free, to proclaim the year of the Lord’s favor.”

Then he rolled up the scroll, gave it back to the attendant and sat down. The eyes of everyone in the synagogue were fastened on him. He began by saying to them, “Today this scripture is fulfilled in your hearing.” Luke 4:16-21 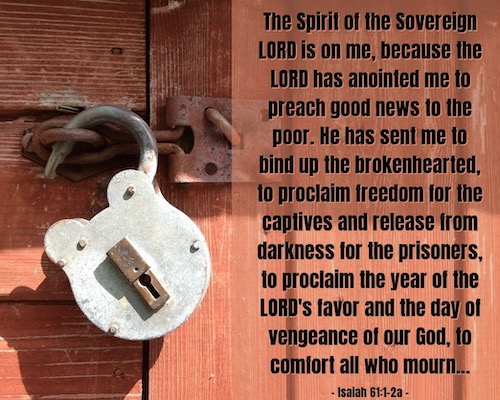 This episode in Luke 4:16-30 did not end well. Because He had declared Himself the Messiah by those words, they tried to throw him off the hill and kill him. But Jesus showed in this reading that He was intimately knowledgable of everything in the Hebrew Bible.

And if, as some assert, He was reading from the Greek Septuagint Bible, Jesus was, also, well-versed in the Greek language.

The Greek Alexander the Great  (July 356-June 323 BC) conquered all of the known world in his 33 years of life.

He conquered from Macedonia (Greece) to Egypt and from Macedonia to a part of India. As he conquered, he spread the Greek language and its culture over a huge part of his world. Greek had become the lingua franca (Italian meaning “Frankish tongue”), the common and commercial language of Jesus’ day.

Jesus was surrounded by Greek language and Greek culture. He was from the region of Galilee: “Land of Zebulun and land of Naphtali, the Way of the Sea, beyond the Jordan, Galilee of the Gentiles.” :Matthew 4:15

In His ministry it was Greek that was spoken often as the Gentiles in His world spoke Greek. The Galilee area was a center of trade in the Mediterranean; the Decapolis (meaning in Greek “Ten cities”) were Greek-speaking cities and Jesus’ fishermen disciples (the brothers James and John and the brothers Simon Peter and Andrew) all had to know Greek in order to function and do business.

“Jesus went throughout Galilee, teaching in their synagogues, proclaiming the good news of the kingdom, and healing every disease and sickness among the people.  News about him spread all over Syria, and people brought to him all who were ill with various diseases, those suffering severe pain, the demon-possessed, those having seizures, and the paralyzed; and he healed them. Large crowds from Galilee, the Decapolis, Jerusalem, Judea and the region across the Jordan followed him.” Matthew 4:23-25

CLICK HERE for Jesus and the Constant Crowds article

Jesus was in and out of the Hebrew/Aramaic world spoken by the Jews at that time. It is interesting that before the introduction of Arabic into the world of languages, the Syrians in Jesus’ day spoke Aramaic and it is still spoken among some Assyrians.

It is absurd to think that Jesus ONLY SPOKE ARAMAIC. Greek was the universal language in His Time and as one knows if one reads the four Gospels, Jesus travelled in and out of the cities and towns in a large area of the Middle East. And the “large crowds” from all over His world would not have gathered to just see and be with Him. They wanted to HEAR what He said and UNDERSTAND it. And Jesus would have wanted the SAME thing. As the Son of God, of course, He could learn very quickly whatever language which He needed for the WORK He had to do.

Latin was the language of the Roman people. But since Greek had been the universal language since Alexander the Great’s time, it was necessary for Romans who ruled or were educated to know Greek, too.

Pontius Pilate and Jesus had a discussion before Jesus’ crucifixion. Pilate was a Roman official who had been sent by the 2nd Emperor of Rome Tiberius (42 BC—37 AD) to “manage” the Jews in ancient Israel:

“Then the Jewish leaders took Jesus from Caiaphas to the palace of the Roman governor. By now it was early morning, and to avoid ceremonial uncleanness they did not enter the palace, because they wanted to be able to eat the Passover. So Pilate came out to them and asked, “What charges are you bringing against this man?”

“If he were not a criminal,” they replied, “we would not have handed him over to you.” Pilate said, “Take him yourselves and judge him by your own law.” “But we have no right to execute anyone,” they objected. This took place to fulfill what Jesus had said about the kind of death he was going to die. 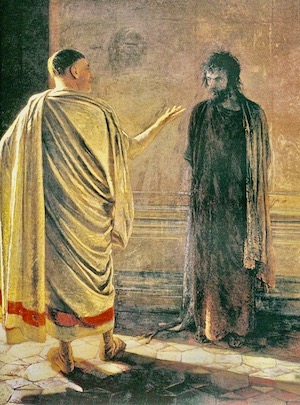 Pilate then went back inside the palace, summoned Jesus and asked him, “Are you the king of the Jews?”

“Is that your own idea,” Jesus asked, “or did others talk to you about me?”

“Am I a Jew?” Pilate replied. “Your own people and chief priests handed you over to me. What is it you have done?”

Jesus said, “My kingdom is not of this world. If it were, my servants would fight to prevent my arrest by the Jewish leaders. But now my kingdom is from another place.”

Jesus answered, “You say that I am a king. In fact, the reason I was born and came into the world is to testify to the truth. Everyone on the side of truth listens to me.”

“What is truth?” retorted Pilate.

With this he went out again to the Jews gathered there and said, “I find no basis for a charge against him. But it is your custom for me to release to you one prisoner at the time of the Passover. Do you want me to release ‘the king of the Jews’?”

At this time in Jesus’ life, he was maybe 33. He is in the palace before Pilate 21 years after His 3-days of conversations with the rabbis in the Temple in Jerusalem.

It is improbable that a Roman man like Pilate would have taken the time to learn the Aramaic or the Hebrew language of the people he was ruling. But even though the Romans considered Latin the  “only real language,” the Romans had bowed to the Greek language, also, because most of their Empire were Greek speakers.

It is probable that Jesus and Pilate spoke to each other in Greek. And Jesus did not learn Latin, the language of their rulers. But Pilate and his wife Procula are both considered saints in some churches because Pilate saw no reason to crucify Jesus and his wife had warned him to have nothing to do with Jesus:

“While Pilate was sitting on the judge’s seat, his wife sent him this message: “Don’t have anything to do with that innocent man, for I have suffered a great deal today in a dream because of him.” Matthew 27:19

Even though Pontius Pilate has a terrible reputation, he did make a sign and hung it over Jesus’ Body on the cross for all to see and read as they came in and out of Jerusalem. It is called “the titular.” He had the following words written in three languages—in Hebrew, in Greek and in Latin: “JESUS THE NAZARENE, KING OF THE JEWS”

“And Pilate wrote a title, and put it on the cross. And the writing was Jesus Of Nazareth The King Of The Jews. This title then read many of the Jews: for the place where Jesus was crucified was nigh to the city: and it was written in Hebrew, and Greek, and Latin.” John 19:19,20 — Article by Sandra Sweeny Silver