One summer in Warren, Ohio, when I was four and my sister was three, a childless woman in our neighborhood asked my mother if my sister and I could come to her home for a Vacation Bible School. My mother was pregnant with my brother and thought it was a good, harmless idea. I don’t remember the kind lady mentioning God or Jesus. She must have. But I do remember a song she   taught us as we all sat on the soft carpet with the big cabbage roses on it and ate graham crackers and sipped milk:

That barren woman is part of my conversion story fourteen years later.

Doors and gates have always had two purposes: to let people IN and to keep people OUT. Certainly the very first purpose was to let people IN once you possessed a dwelling. But the human race is a “fallen from grace” people, so as we progressed, it was imperative to keep robbers, rapists and killers OUT. INside the flaps of tents and yurts were sinews that could be tied/knotted together as the first line of defense against intruders. INside doors of adobe, wood, stone or brick homes were bolts of iron, wood or bronze to keep people snug, safe and sound in their leaf, straw, animal skin beds.

Locks and keys for doors have been around for c. 4,000 years (remember we are fallen from grace, so must keep pace with enemies of our households). We know the Egyptians had them and the Greeks and Romans improved on Egyptian security devices.

The oldest wooden lock was discovered in Iran at Khorsabad in a security gate in the palace of King Sargon II (722 to 705 BC). It is very similar to this wooden cane-tumbler lock. The pegs at the bit end of the key correspond to the tumblers or bars in the bolt. When inserted, the pegs could lift the tumblers, the bolt could be retracted and the door (or gate) could be opened. Remember the expression “Katie, bar (close and lock) the door?”

Tobiah, governor of Ammon (Jordan), was put in charge of Israel by the Babylonians when they destroyed the Jerusalem Temple and sacked the city in 586 BC. Tobiah is a Jewish name and one of his ancestors in Ezra 2:60 had been expelled from the Jewish community because he “could not show (genealogically) that their families were descended from Israel.” When the Persian King Artaxerxes I “opened the door” in c. 445 BC for some exiled Israelites to return to Jerusalem, Nehemiah et al came back to Jerusalem to rebuild the walls and the gates in the walls. (Nehemiah 1 & 2:1-10)  The Israelites  “set up the doors thereof, and the locks thereof, and the bars thereof.” Tobiah obstructed Nehemiah’s work over and over again. He finally left and built his own Palace in nearby Jordan. Tobiah’s family had been “shown the door” by the Israelites and he never recovered from that OUSTER (from Latin obstare, “to stand against, to block”).

Because doors and gates are ubiquitous and because they mean  entrance and egress, “doors” have come into our languages as idioms: If you ”open doors for someone,” you facilitate their agenda; if you have the “door closed in your face,” you are rejected immediately; if you sign a legal paper “behind closed doors,” you are “dumb as a doornail;” if you “never darkened the door of a church,” when you find yourself at “death’s door,” you may want “to open the door to belief.”

“Open for me the gates of the righteous; I will enter and give thanks to the Lord. This is the gate of the Lord through which the righteous may enter. I will give you thanks, for you answered me; you have become my salvation.” A Psalm of David 118:19-21 (c. 1000 BC) 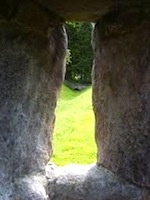 When Jesus makes His eight startling I AM claims in the Gospel of John, one of them is He Is The Only Door/Gate to eternal salvation:  “I am the gate; whoever enters through me will be saved. They will come in and go out, and find pasture.” John 10:9 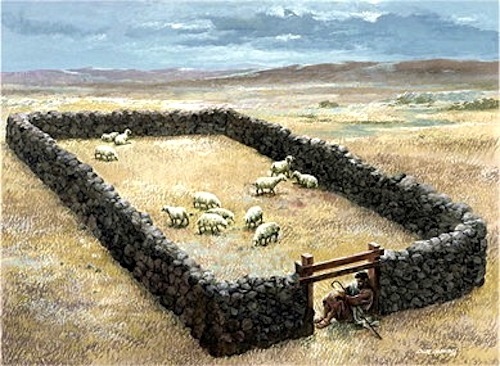 If we cycle back to the nursery song at the beginning of this article, we see it comes from Revelation 3:20: “Here I am! I stand at the door and knock. If anyone hears my voice and opens the door, I will come in and eat with that person, and they with me.”

The small window in Sallman’s door (at the beginning of this article) shows how dark it is INside that dwelling compared to the light OUTside where He stands knocking. Notice in Sallman’s painting the door has no OUTside handle. It must be opened from the INside.—Sandra Sweeny Silver