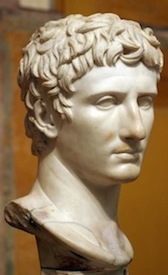 The first Roman Emperor Augustus (ruled 27 BC-14 AD) loved boxing whether it was an official match with a referee or simply a street brawl:

“His chief delight was to watch boxing, particularly when the fighters were Italians — and not merely professional bouts, in which he often used to pit Italians against Greeks, but slogging matches between untrained roughs in narrow City alleys….Augustus expelled Pylades not only from Rome, but from Italy too, because when a spectator (at a boxing match) started to hiss, he called the attention of the whole audience to himself with an obscene movement of his middle finger.” Suetonius Lives: Augustus

That middle finger goes way back in history. As does “thumbs up.”

One notices the Roman statue seems to depict wrestling rather than boxing. In ancient Greek and Roman times wrestling was often combined with boxing into a sport call Pankration, meaning “with all might/force.” In ancient times there were no rounds, no boxing gloves and no time limit to the contest between the two naked men. The contest was over when one man raised his index finger or it became obvious that one could not win and the other was proclaimed the winner. There were only three rules: you could not gouge out the eyes of your opponent nor could you bite him or attack the genitals. All else was fair game. There was a referee with a switch to make sure no one violated the rules or died and a judge to oversee the fight and declare a winner.

Boxing had been around long before the Greeks and Romans popularized it. Here are two Minoan boxers from a painted relief in Knossus from c. 1400 BC.

In a terra cotta relief from Iraq in c. 1200 BC, we see two men boxing to the accompaniment of music. Roman gladiators who fought to the death of one of them, also, had musical accompaniments! With our marching bands accompanying football games we retain that sports/music combination. 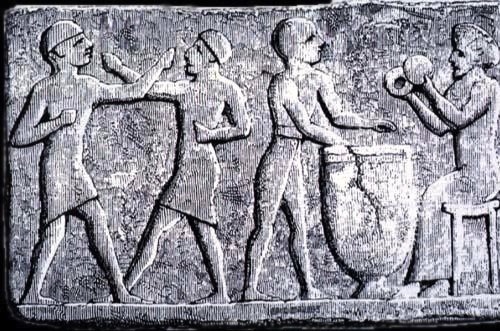 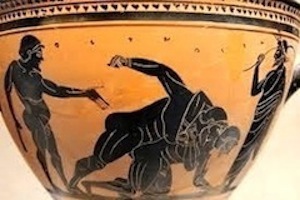 There are many ancient Greek terra cotta vases that illustrate better than words how the ancient boxing contests were fought. The participants in this sport appear to have been very hefty men. (c. 490 BC). The referee 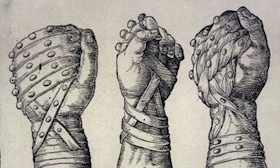 with his switch to hit the “hefty” person should he foul and the judge on the left declaring the winner. (c. 490 BC) The knobs on the “gloves” were rounded pieces of leather destined to do more damage. The switch of the referee below is being used to call a foul.

The boxer on the right (below) is Varazdat, King of Armenia, who won so many times at the Olympics in the late 300’s AD that he was finally declared The Olympic Champion In Boxing. Boxing was known in Rome as pugilatus from which we derive pugilism from the Greek word for “fist” pugnus. Here leather protection on their hands and forearms have evolved. Notice the switch of the referee to the right of Varazdat. 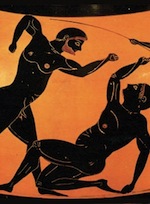 On the Greek terra cotta jar to the left, it 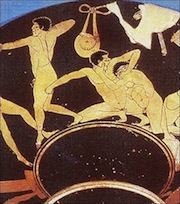 seems the referee with his switch is stepping in. Maybe it was a foul that one had been knocked down? On the jar to the right (c. 776 BC), one man was definitely “going for the eyes,” violating one of the three rules in the Pakration—you could not gouge out the eyes of your opponent nor bite him or attack his genitals.  It was apparently not a violation to kick your opponent in the stomach. The referee below does not have his stick up. Here there seems to be a “heavy weight” against a “light weight.”

A couple more terra cotta vase depictions of  “moves” in the ancient world of the boxing/wrestling sport of Pankration are shown below.

Below is an interesting Mosaic from the early 300”s AD from Tunisia. It illustrates many scenes from the Olympics. Boxing (Pankration) is on the right, 3rd row down. The referee is handing the winner his laurel branch. Obviously his opponent was defeated, held down for a long time. Notice in the last row down, a town or kingdom has won 8 laurels at that Olympics.

Sculpture Of An Ancient Boxer, clearly exhausted and bloody, with boxing gloves and wrist/arm protection. 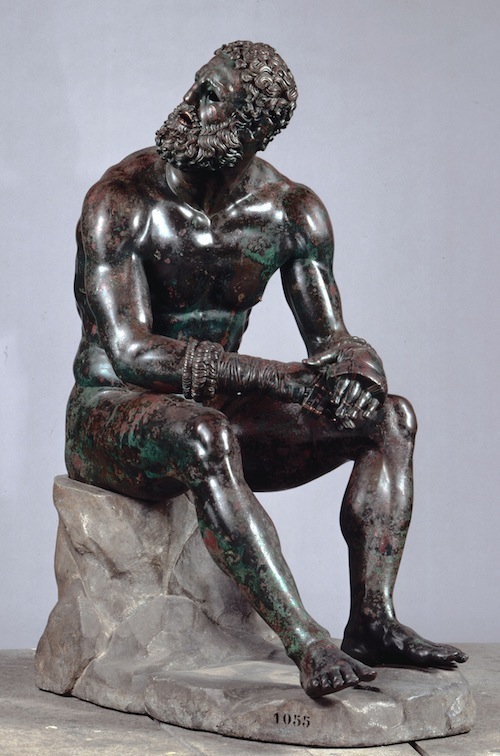 The games were so violent that some participants were left permanently maimed or dead. One boxing match ended with all the fingers in both hands of a participant broken. One Olympian Damoxenes once pierced through his opponent’s rib cage and ripped out his intestines. Each Olympic year, even though Christianity was becoming the dominant religion in  Europe, the festivities began with sacrifices of pigs and sheep dedicated to Zeus and prayers to the Olympian gods.

In 393 AD the Christian Emperor Theodosius I outlawed the Olympics because of its violence and paganism.

1,503 years after the Olympics were banned, the Olympic Summer Games were resumed in 1896 in Athens, Greece and the Winter Olympics resumed in Chamonix, France in 1924. No gouging out of eyes, ripping out of intestines or permanent injuries inflicted by another are allowed.

In today’s modern world, boxing is a popular sport. The 1867 rules of the Marquess of Queensbury have been followed somewhat since 1867: 9-12 rounds of 3 minutes each with a 1 minute rest between rounds. There were no number of rounds or periods of rest in the ancient world of boxing. There were, however, a referee and a judge as there are today.

The longest recorded boxing match in history was between Jack Burke and Andy Bowen in New Orleans. It was 110 rounds long and they both wore boxing gloves. The match started c. 9 at night on April 6, 1893 and ended the next day after 4 in the afternoon when Andy and Jack were too exhausted to continue. They fought a total of 7 hours and 19 minutes. It was finally declared “a draw.”—Sandra Sweeny Silver