A daily papyrus newspaper, the Acta Diurna (Daily Events), was distributed in locations  in Rome and around the Baths. Its motto was “Publicize And Propagate.” Probably the low-grade saitic or taenotic papyrus was used for daily publishing, no doubt one of the reasons that no scraps of the Acta Diurna have ever been found. 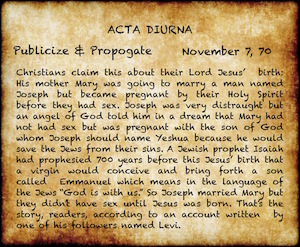 Whitewashed boards with news of the day were, also, posted in public places. The Acta Diurna kept Romans current on events of interest: weddings, births, deaths, crimes, trials, monies in the treasury from the provinces, the cost of the supply of grain, movements and events in the Imperial family, gossip columns on the latest amatory adventures of the rich and famous, gladiator events, military and political news as well as some human interest stories (dog lost far away finds way home) and astrological readings.

When Julius Caesar was Consul in 59 BC, he began the Acta Diurna and ordered it posted in markets, on the doors of temples and in all public places. Because no pieces of the daily newspaper are extant, we know about the gazette and its popularity with Romans,  Christians and Barbarians only through ancient writers. In the writing of his Lives of the Caesars Suetonius used the Acta Diurna for dates and places of births, deaths and events. 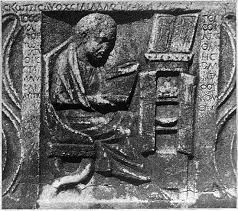 Through Tacitus we learn the newspaper was carried by courier throughout Rome’s vast empire and was eagerly read for current news from Rome. Describing a bit of intrigue between Nero and one of Nero’s opponents in the Senate named Thrasea, Tacitus says: “The journal of the Roman people is scanned through the provinces and armies with double care for news of what Thrasea has done.” Annals 16.22 Tacitus does, however, want to separate his great works of history from common journalism: “It has been held fitting to consign great events to the pages of history and details such as these (the foundation and beams of Nero’s amphitheater) to the urban gazette.” Annals 13.31 The daily gazette, published in Rome, continued until c. 330 when Emperor Constantine moved the seat of government to Constantinople.—Sandra Sweeny Silver