A mosaic is “a picture or pattern produced by arranging together small colored pieces of hard material, such as stone, tile, or glass.”
The oldest known mosaic in England depicting Christ and dating to the 300’s AD was found in 1963 when a post-hole was being dug by village blacksmith Walter White in the field behind his forge. The mosaic is mostly made from local yellow, brown, dark grey, and white stones and pieces of red tile, all set in mortar.

Creating art and patterns with the mosaic technique has been around since very ancient times.

It seems to have been the Greeks in the 400’s BC and beyond who refined mosaic art to include people, animals and events imitating paintings rather than designs. By 200 BC tesserae, the small (often less than an inch) pieces used in mosaics were being manufactured and could be bought by artists. These pieces gave color and texture and shading to the mosaics. 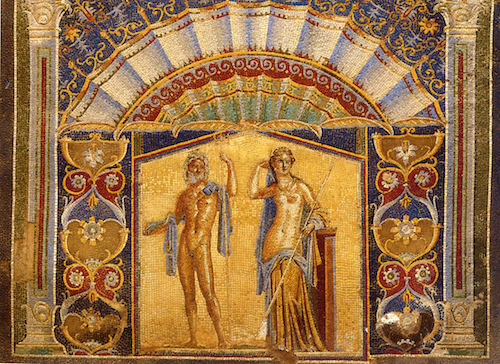 This stunning wall mosaic from Herculaneum (above), like the mosaics from Pompeii, was likely done by a Greek artist. It is a wall mosaic that included pieces of glass with the marble tesserae to give the reflecting, vivid colors, The sea-god Neptune is on the left with the goddess of love Aphrodite on the right. c. 150 BC

As the mosaic technique in the ancient world evolved, smaller and smaller pieces of tesserae were used in the mosaics. It is hard to imagine how long it would take an artist to make a very large mosaic using many .07 inch pieces! But they did and created incredibly sophisticated and beautiful floor and wall mosaics. The best of these, simulating a painting, were called opus vericulatum, “worm-like work” or “working worm-like” (tiny inch by tiny inch). 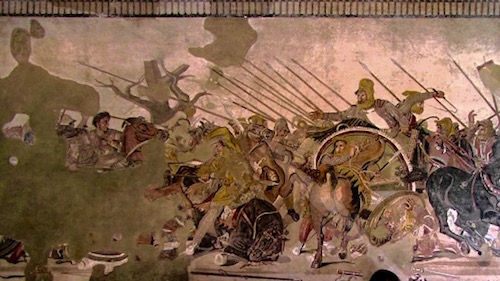 Illustrating an opus vericulatum is The Alexander Mosaic, c. 100 BC (above). It is a Roman copy of a lost Greek painting, from the House of the Faun in Pompeii. Original in Naples Archeological Museum

The Alexander Mosaic is from a floor in the House of the Faun in Pompeii and is composed of over 1,500,000 pieces (tesserae). It depicts a battle, perhaps the Battle of Issus on November 5, 333 BC in modern-day Turkey, between the armies of Alexander the Great and Darius III of Persia and measures 8 ft 11 in × 16 ft 10 in. Alexander won that battle. (The Alexander Mosaic is believed to be a copy of an early 3rd-century BC Greek painting.)

Sosus of Pergamon (c. 150-100 BC) is one of the few ancient mosaic artists ever named. He was from Pergamon, modern-day Bergama, in ancient Turkey. We know his two famous mosaics: The Unswept Floor and Doves Drinking From A Bowl.  As in today’s world, there were then popular patterns to put on walls and floors. One may wonder why one would ever choose this mosaic of a floor littered with debris, but the ancient Romans and probably Greeks had many copies of Sosus’ The Unswept Floor (below) done in mosaic on their dining room floors. It, also, shows how messy their floors were after a fine meal!

The other mosaic for which Sosus is and then was very admired was Doves Drinking From A Bowl (below). One can imagine the high degree of workmanship this required to demonstrate in tesserae the metal, the feathers and the water in this exquisite mosaic. Pliny the Elder (23-79 AD) who gave us the name of this artist in his Natural History praises the mosaic as “perfect illusionism.”

And that is what the ancient artists who worked in mosaics were desiring—that we see their mosaic as a painting, even though it is not.— Sandra Sweeny Silver