The famous mask of King Tut (Egyptian Pharaoh 1341—1323 BC) is covered in gold leaf/foil. Gold leaf has been created and used for thousands of years.

Gold sandwich glass or gold glass was an ancient technique for fixing a layer of gold leaf embellished with a design and sandwiched between two fused layers of glass. Hundreds of sandwich gold glass have been found in the catacombs of Rome. They all are just the bottoms of wine glasses or small bowls which have been carefully separated from the glass or bowl. They appear to be markers on the thousands of small burial niches in the catacombs identifying the grave of the interred one/ones to distinguish his/her niche from all the other niches. (All these sandwich gold glass markers, as well as all the remains from the catacombs, were removed centuries ago and are now in museums.)

The couple on the bottom of the Roman sandwich gold glass drinking cup below (from 300s AD) obviously loved their vino. The Latin inscription PIE ZESES etched into the gold translates according to some linguists as “Drink May You Live.” Others believe the phrase means “Merciful Zeus.” 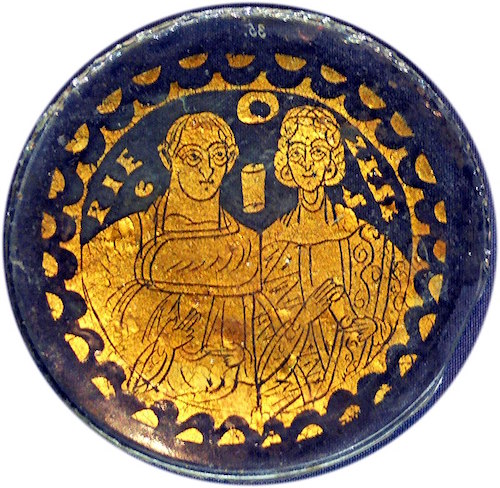 The portrait on bottom of the wine glass  below (300s AD, Bologna, France) depicts the traditional Roman expression on funeral markers “Drink May You Live” PIE ZESES. Sandwich gold glass was always pressed into the fresh mortar on the burial niche. Maybe the two young brothers died or were killed and the parents had this portrait of them made to mark their grave? We’ll never know. 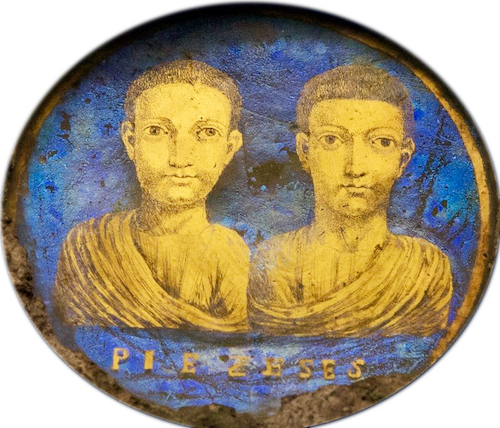 Romans such as the above and, also, Jews were buried in the catacombs and used sandwich gold glass to mark their graves. 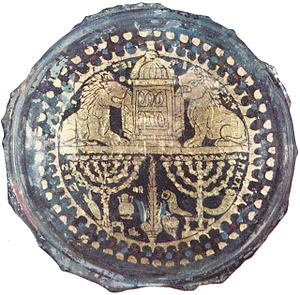 The Jewish sandwich gold glass to the left (from the Roman catacombs, c. 100s) depicts two lions from the tribe of Judah flanking a Torah ark on the top; below two menorah, a shofar (ram’s horn), etrog (yellow citrus tree), lulay (date palm tree) and other objects associated with the celebration of Succoth. Not all the tiny symbols can be confidently identified.

Most of the Roman gold glass in the catacombs was done by the Christians. Portraits of Biblical people and scenes account for more than half of this type of remembrance.

Christians believed and believe when they die, their spiritual bodies will be resurrected just as Christ raised Lazarus from the dead:

“When he had said this, Jesus called in a loud voice, ‘Lazarus, come out!’ The dead man came out, his hands and feet wrapped with strips of linen, and a cloth around his face. Jesus said to them, ‘Take off the grave clothes and let him go.’” John 11:43, 44

Another Biblical person has, also, been seen as a sign of the resurrection of the body—Jonah. Jesus Himself used Jonah to prefigure His Own resurrection from the dead:

“Then some of the Pharisees and teachers of the law said to him, ‘Teacher, we want to see a sign from you.’ He answered, ‘A wicked and adulterous generation asks for a sign! But none will be given it except the sign of the prophet Jonah. For as Jonah was three days and three nights in the belly of a huge fish, so the Son of Man will be three days and three nights in the heart of the earth.’” Matthew 12:38-40 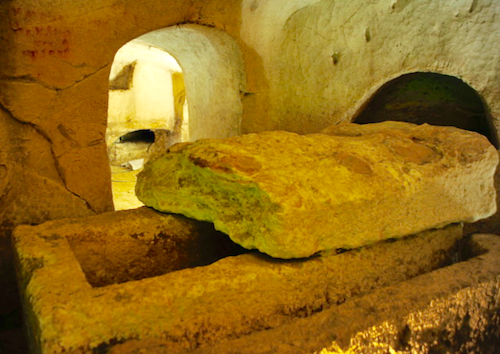 Jonah 1:17 “Now the LORD provided a huge fish to swallow Jonah, and Jonah was in the belly of the fish three days and three nights.” 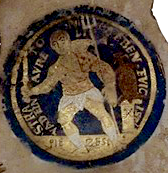 Some of the pieces of sandwich gold glass are still stuck with the mortar in which it was placed like this depiction of a gladiator (right).

Sandwich gold glass often depicts Christ with his two main apostles—Peter to whom He said, “Feed My sheep” and Paul whom He chose to take the message of His resurrection to the Gentiles. 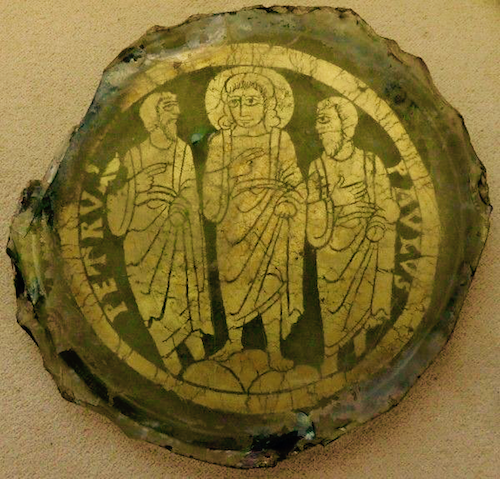 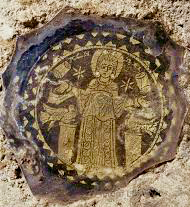 The gold glass on the left (in Catacomb of Pamphylus in Rome) depicts St Agnus. The 12-13 year-old Agnes was one of the most revered by the early Christians after her martyrdom in c. 304 AD. She was tortured, set on fire and finally beheaded because she would not recant her faith in Christ.

CLICK HERE for article on Martyrdom of Saint Agnus

Sandwich gold glass was not just done for wine glasses. On the right is an ancient bowl where gold and stripes of other colors were created.

The making of any kind of glass involved a kiln that was heated up by large amounts of wood to at the very least 2200 degrees Fahrenheit.

The long hollow pipes used by glassmakers have been around since ancient times. Sand and sodium bicarbonate, the ingredients for glass, have always been readily available. And the effectiveness of kilns for bread-making surely inspired the early glass makers to make their kilns.

Since glass making has been around since Mesopotamians were making glass beads in 2500 BC, the crucial questions this writer has are: What material did they use to make those kilns and how did they get the kilns up to at the very least 3,000 degrees Fahrenheit to melt the sand to make the glass beads and bowls and Sandwich Gold Glass?

For the over 2,000,000 people who have watched this Video on how sand gets turned into glass IN THE MODERN WORLD, this Video still does NOT answer this writer’s questions about the ANCIENT WORLD and glassmaking.—Sandra Sweeny Silver