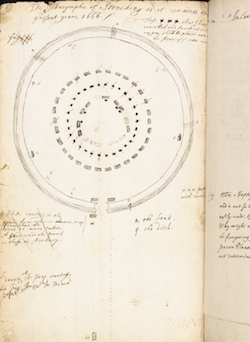 There is a variant spelling of the word in recent years—archeology. No matter how it is spelled, archaeologists have been digging up and studying ancient finds since the English John Abrey (1626–1697) discovered the stone circle of Avebury in 1649 and spent the rest of his life finding and recording all the stone circles he could find. Abrey, also, was the first to figure out a plan at Stonehenge (left).

But archaeology really got the attention of the world and other amateur archaeologists when people started exploring the ruins of the buried-in-lava ancient cities of Pompeii and Herculaneum in the 1700’s. From then on, archaeology became a world-wide hunt for all our ancient civilizations.

CLICK HERE for article on Destruction of Pompeii & Herculaneum

This article focuses on several of the many archaeological finds which verify Biblical history.

1. The walls in the Temple of Amun 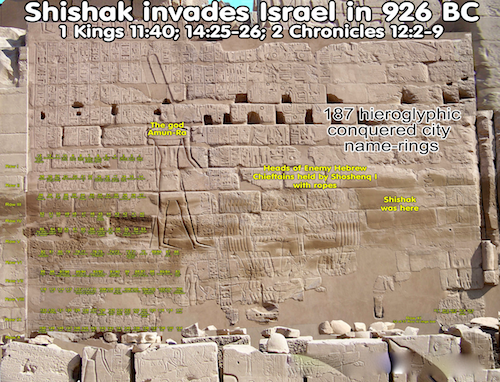 The campaign into Israel by Pharaoh Shishak (Died: 924 BC) is recorded by this Pharaoh in relief on the sixth and seventh pylons on the walls of the Temple of Amun in Thebes, Egypt. In the Bible that campaign is, also, recorded. 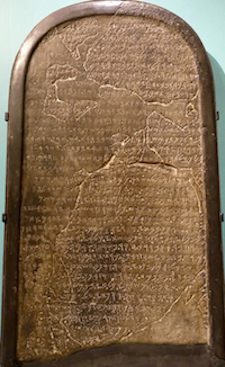 2. The Mesha Inscription, the Louvre

The revolt of Moab against Israel is recorded on the Mesha Inscription dating to c. 850 BC. It is a stele discovered in 1868 at Dhiban, Jordan—in the Bible called Dibon, the capital city of Moab. The 34 lines etched into the stone is King Mesha’s memorial of his victories. It is particularly valuable because it was erected right after one of his revolts against Israel, so it is contemporary with Israel’s record below of one of the battles. Mesha does not mention Moab was ultimately defeated by Israel, but he does mention the battles with Israel which illustrate the veracity of the Bible. And the Bible illustrates the truth in the Mesha Inscription.

“After Ahab’s death, Moab rebelled against Israel….
….Now Mesha king of Moab raised sheep, and he had to pay the king of Israel a tribute of a hundred thousand lambs and the wool of a hundred thousand rams. But after Ahab died, the king of Moab rebelled against the king of Israel. So at that time King Joram set out from Samaria and mobilized all Israel. He also sent this message to Jehoshaphat king of Judah: “The king of Moab has rebelled against me. Will you go with me to fight against Moab?”“I will go with you,” he replied. “I am as you are, my people as your people, my horses as your horses.”….So the king of Israel set out with the king of Judah and the king of Edom.….….Now all the Moabites had heard that the kings had come to fight against them; so every man, young and old, who could bear arms was called up and stationed on the border.….But when the Moabites came to the camp of Israel, the Israelites rose up and fought them until they fled. And the Israelites invaded the land and slaughtered the Moabites.….When the king of Moab (Mesha) saw that the battle had gone against him, he took with him seven hundred swordsmen to break through to the king of Edom, but they failed. Then he took his firstborn son, who was to succeed him as king, and offered him as a sacrifice on the city wall. The fury against Israel was great; they (the Israelites) withdrew and returned to their own land.”

When the Jews saw/heard about that sacrifice, the battle became incidental to their horror. 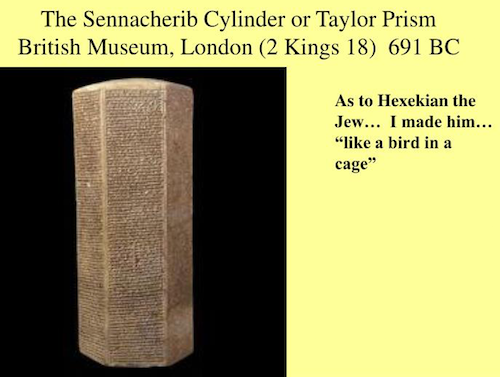 The campaign of the Assyrian king Sennacherib (Reign 705 BC—assassinated 681 BC) against Judah is recorded on the Taylor Prism—Sennacherib’s Annals of his military campaigns (704–681 BC), including his invasion into the Kingdom of Judah, also recorded in the Bible. 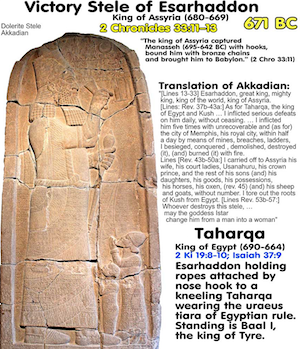 “That night the angel of the Lord went out and put to death a hundred and eighty-five thousand in the Assyrian camp. When the people got up the next morning—there were all the dead bodies! So Sennacherib king of Assyria broke camp and withdrew. He returned to Nineveh and stayed there. One day, while he was worshiping in the temple of his god Nisrok, his sons Adrammelek and Sharezer killed him with the sword, and they escaped to the land of Ararat. And Esarhaddon his son succeeded him as king.” 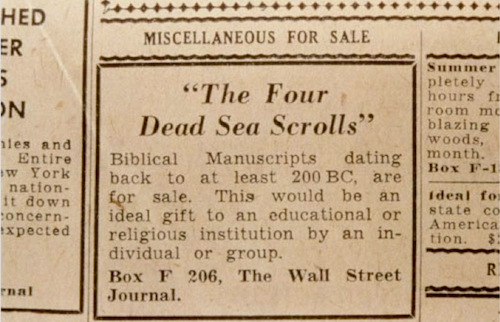 This small ad was put in a United States newspaper, the Wall Street Journal, on June 4, 1954. It is astonishing that the greatest discovery ever of Biblical Manuscripts of the Old Testament, discovered in 1947, was not yet recognized for what they are—a revolution in our understanding of the Bible, religion and history itself.

A young Bedouin shepherd found the first of the many Dead Sea scrolls in a cave near Qumran, a dry plateau near the northwestern shore of the Dead Sea.

He sold the scrolls in Jerusalem to Metropolitan Samuel. He and others to whom Samuel showed the ancient scrolls recognized the old Hebrew writings.

The scramble among the shepherds and Jewish and Christian archaeologists and scholars began.

Now, the caves in Qumran have yielded parts of every book in the Old Testament as well as the complete book of Isaiah. The book of Esther was not included in these Qumran scrolls. A possibility is: the Essenes (a Jewish religious sect who lived separately from other Jews) probably lived there and did not include Esther because it is the only book in the Old and New Testament that does not mention God.

When the writings in the 300 BC—100 BC Dead Sea Scrolls are compared to what is in our Old Testament today, it is the same. Seems Some One was looking out for the accurate translation of His Word over the last over c. 2,000 years! 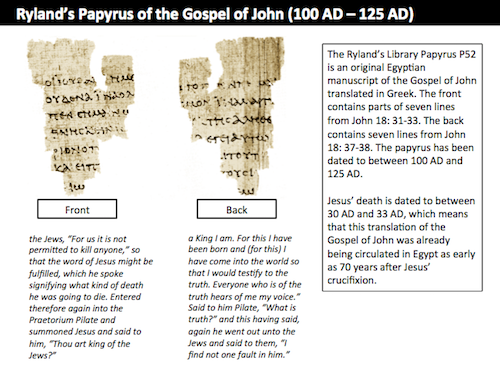 In 1920 Bernard P. Grenfell and Arthur S. Hunt, scholars at the University of Oxford, visited Egypt and acquired a number of fragments of papyrus which had been found, maybe, in an excavated ancient garbage dump near the Nile River. Grenfell acquired them for the John Rylands Library in Manchester, England. One of these was a 3.5 by 2.5 inch fragment which when studied and translated turned into the famous P52 Ryland Manuscript, the oldest known fragment from the New Testament. It is written on both sides of the papyrus which indicates it was not a scroll but a codex, a sewn and folded “book.’ The papyrus codex includes part of the top and inner margins of the page. The front of the fragment includes 7 lines from John 18:31-33. It is all written in bold Greek. Below is the writing on the back of the fragment from John 18:37-38.

English translation of the above in the P52 Rylands Papyrus:

“A King I am. For this I have been born and (for this) I have come into the world so that I would test-ify to the truth. Everyone who is of the truth hears of me my voice.” Said to him Pilate, “What is truth?” and this having said, again he went out unto the Jews
and said to them, “I find not one fault in him.”

Here is my English translation of John 18:37-38 in my NIV Archaeological Study Bible (Copyright 2005 The Zondervan Corporation) c. 2,000 years after the Ryland Papyrus 52 was written:

“You are a king, then!” said Pilate. Jesus answered, “You say that I am a king. In fact, the reason I was born and came into the world is to testify to the truth. Everyone on the side of truth listens to me.” “What is truth?” retorted Pilate. With this he went out again to the Jews gathered there and said, “I find no basis for a charge against him.”

The Rylands fragment thus shows that the Bible has not been altered despite being copied and recopied over time. One can be assured the words written in your inspired Bibles are identical to what was originally written millennia ago.

All of the illustrations above attest to the VERACITY, “the conformity to facts; accuracy” of the Bible we read and love TODAY.—Sandra Sweeny Silver 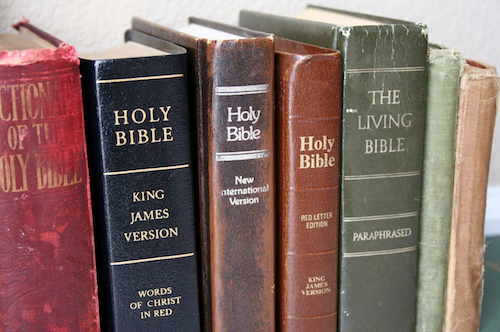