One morning in May of 70, Titus and his good friend Nicanor were at the walls of the city of Jerusalem with Josephus, the Roman interpreter, as he was trying to persuade the Jews to surrender and to save themselves and their city from destruction by the Romans. They rode too close to Jerusalem’s wall and an arrow struck Nicanor in his left shoulder. Titus, seeing that the Jews would not even allow those who had come in peace to speak to them, became furious and began the siege of Jerusalem in earnest.

He had his soldiers burn all the suburbs surrounding Jerusalem. He cut down all the trees to build embankments. As his soldiers constructed the large ramps up to the walls for the battering rams to enter, the Jews continuously pummeled them with arrows and jumped out and made sorties against them. As a show of strength in contrast to the Jews’ arrows, the Romans retaliated with the Big Bertha of catapults called the Wild Ass (Onanger) because of the powerful kick generated by the recoil as the machine released stones. The Onanger catapulted 75 lb. stones over 1,300 feet:

“The stones that were cast were of the weight of a talent (c. 71lbs.) and were carried two furlongs (1,320 feet) and farther. The blow they gave was no way to be sustained, not only by those that stood first in the way, but by those that were beyond them for a great space. As for the Jews, they at first watched the coming of the stone, for it was of a white color and could therefore not only be perceived by the great noise it made, but could be seen also before it came by its brightness. Accordingly when the watchmen that sat upon the towers gave them notice when the engine was let go and the stone came from it, they cried out aloud in their own country language (Aramaic), ‘The son cometh.’” Josephus, Wars 5.6.3

After the Wild Ass, the Romans brought the battering ram called Victor up the embankment to one of the walls of the city: 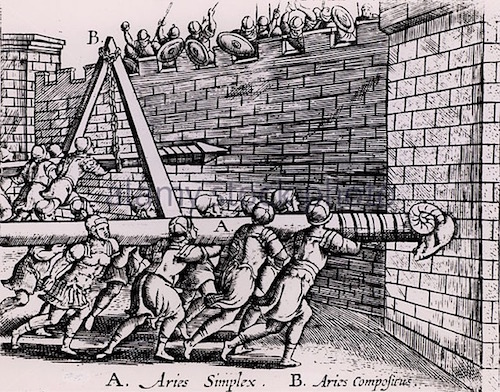 “This battering ram is a vast beam of wood like the mast of a ship; its forepart is armed with a thick piece of iron at the head of it which is so carved as to be like the head of a ram, whence its name is taken. This ram is slung in the air by ropes passing over its middle, and is hung like the balance in a pair of scales from another beam and braced by strong beams that pass on both sides of it in the nature of a cross. When this ram is pulled backward by a great number of men with united force and then thrust forward by the same men, with a mighty noise it batters the walls with that iron part which is prominent; nor is there any tower so strong or walls so broad that can resist any more than its first batteries.” Joseph’s, Wars 3.7.19

The Romans had all the conventional mechanics for war: trying to intimidate with a show of their army and resources, battering rams, powerful catapults, ramps and siege towers. But they had not innovated any new military tactics or hardware.

When Titus dressed up his armies and paraded them around Jerusalem to intimidate (Wars 5.9.1), Sennacherib’s Assyrian army had employed the same strategy against Jerusalem, unsuccessfully, in c. 700 BC (2 Kings 18:19-19:35). Over a hundred years later the Babylonian king Nebuchadnezzar besieged and destroyed Jerusalem and the first Temple in 586 BC:

“(Nebuchadnezzar) encamped outside the city and built siege works against it….the famine in the city had become so severe that there was no food for the people to eat. The city wall was broken through….He set fire to the temple of the Lord, the royal palace and all the houses of Jerusalem….broke up the bronze Sea…and carried the bronze to Babylon….and (everything) made of gold or silver….took prisoners….So Judah went into captivity, away from their land.” 2 Kings 25:1-21 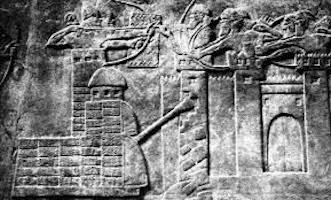 The Romans replicated those tactics 650 years later. The Romans were doing nothing new. Even battering rams, a great invention in warfare, had been around and can be seen on ancient reliefs from the late Bronze Age. The battering ram in this wall relief (left) is from the conquest of Lachish by the Assyrian King Sennacherib in the 700’s BC.

The fabled Roman military’s tight phalanx formations had first appeared on the world scene in c. 1200 BC at the beginning of the Iron Age. It was the evolution of these compact military ranks disciplined enough to withstand the massed chariot charges, so effective in scattering troops and causing mayhem, that eventually led to the end of armies of chariots. The chariot became a vehicle for kings and generals.

The earliest known depiction of a phalanx-like formation occurs in a Sumerian stele from the 25th century BC. Here the troops seem to have been equipped with spears, helmets, and large shields covering the whole body. Ancient Egyptian infantry were known to have employed similar formations.

The first usage of the term phalanx comes from Homer’s “(φαλαγξ)”, used to describe hoplites fighting in an organized battle line. Homer used the term to differentiate the formation-based combat from the individual duels so often found in his poems.

The Roman army that conquered its known world did not have any new military inventions. They conquered through determination and fortitude and—because they were Romans and that’s what good Romans did.

As Julius Caesar (c.100-44 BC), the Roman General, said so simply about his conquests: “Veni. Vidi. Vici” (“I came. I saw. I conquered.”) Suetonius, Lives of the Twelve Caesars: Julius—Article by Sandra Sweeny Silver 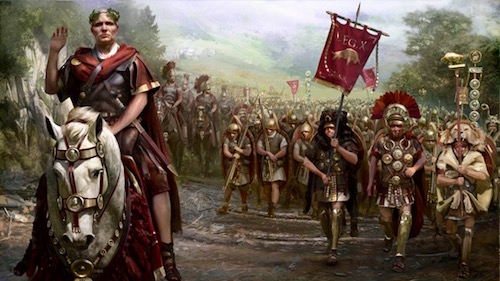