An Actor or Actress is called “a thespian.” Why? There was a Greek man in the 6th century BC named Thespis. He is the first named man in the ancient Greek world who stepped out of his role in the traditional Chorus and started to act out the roles of the people who were being named in the scripted drama. He became an actor, “a participant in an action or process.” Over the last 2,000 years, actors and actresses have been called THESPI-ANS. 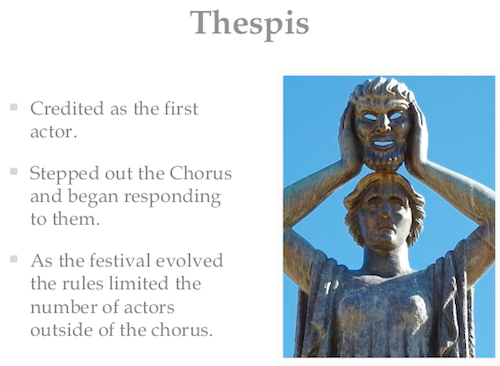 Over time, as the Chorus (group of men who acted in concert with each other) remained playing its role, Thespis would alone play the various roles by switching masks.

Thespis won first prize (Academy Award) in c. 534 BC for best tragedy in the City of Dionysia festival. From then on, the name Thespia was influential and he is even credited with developing masks for characters and may have written several plays.

How did plays and theaters as we know them originate? From very ancient times, man has been telling stories to people. Story telling probably began by a recounting to others of how a particular man did an heroic thing. The image on the left below of the Stone Age man, fighting bee stings, climbed a tree and got precious, sweet honey for his family/tribe must have been told over and over again. Then this act was memorialized forever, inscribed upon a cave rock in Valencia, Spain (c. 5000 BC).

The probably true stories in the Iliad and the Odyssey by Homer in c. 1000 BC were eventually written down and preserved in papyri and codices for us to enjoy. And men like the slave Aesop in his Fables told stories about animals illustrating moral values.

Stories, true or fiction, were eventually demonstrated in plays. The Greeks are credited with having the    first “plays” and “theaters.” Probably the first plays in c. 700 BC were in Athens and were simply public festivals to honor their god of wine Dionysius. Several centuries later the Father of Theater, the Greek playwright Aeschylus (c.525—c.455 BC), wrote and staged his play The Persians in 472 BC. It is the oldest surviving Greek play.

From that one play, it seems, the ensuing Greek dramatists developed tragedies, comedies and satyr plays. Greek theaters, plays and actors were soon cropping up all over the Classical world.
The word “play,” as in theatrical performance, is first attested in the early 1300’s from the Old English word plega meaning “quick motion; recreation, exercise, any brisk activity.”

The word “theater” comes from the Greek theatron, meaning roughly, “a place to behold.” Most of the Greek theaters still stun us today with their beauty and grandeur. The best-preserved theater is in the small Greek town of Epidaurus. It is still used today for performances and seats c. 14,000 people. The entire seating section was called the theatron. The theater itself as well as the plays must have been “a wonder to behold.”

Paul of Tarsus in the Bible got into a lot of trouble in Ephesus when he was preaching the Gospel and the silversmiths who made a lot of money on their idols of Artemis, the patron of Ephesus, riled the whole city against Paul and his companions: 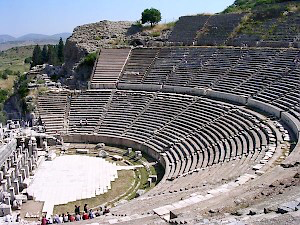 “When they (Ephesians) heard this, they were furious and began shouting: “Great is Artemis of the Ephesians!” Soon the whole city was in an uproar. The people seized Gaius and Aristarchus, Paul’s traveling companions from Macedonia, and all of them rushed into the theater together. Paul wanted to appear before the crowd, but the disciples would not let him. Even some of the officials of the province, friends of Paul, sent him a message begging him not to venture into the theater.” Acts 19:28-31

Where the above Ephesus took place: in the Odeum (from Greek ōidē —“song”) in Ephesus, Turkey (above right) constructed in 3rd century BC. This writer has seen it and it amazes. It seats 25,000 people for concerts and performances in our time.

Over a thousand years later the medieval Christian church began to put on “plays.” At first they illustrated popular Bible stories: the Resurrection of Jesus; Daniel in the Lion’s Den, etc. The medieval Church expanded over the centuries. The most popular plays were Morality Plays which illustrated the conflict between good and evil in our lives. 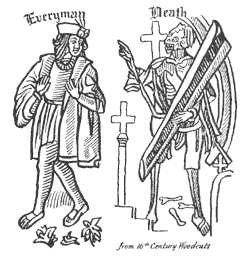 The play Everyman by an unknown writer was first performed in c. 1510, but its popularity was revived hundreds of years later in 1901 when The Elizabethan Stage Society of William Poel gave three outdoor performances at the Charterhouse in London. Everyman was so popular it toured throughout Britain and was performed on Broadway in America from 1902 to 1918. Apparently, the theme of the forces of evil and the forces of good battling for the soul of every man after his death is timeless.—Sandra Sweeny Silver

CLICK HERE for article on the ancient Roman actor Genesius